It takes courage to follow Church's teachings on life issues 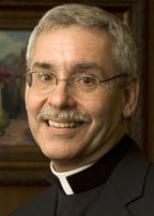 Today we celebrate the martyrdom of St. John the Baptist, which has a lot to say to us as we gather for this Respect Life Conference. The most obvious thing is that it is an instance of capital punishment -- a pro-life issue -- and a miscarriage of justice that foreshadows not only that of Jesus, but also the martyrdom of many of Jesus' followers, including the apostles and St. Paul whose year we have just completed.

Of all the pro-life issues, the immorality of capital punishment in today's America is -- sadly -- one of the teachings of the Church articulated by recent popes regarding which many American Catholics have closed their minds and hardened their hearts. Apart from the obvious need for people to see that this too bears on the sanctity of life and the intrinsic dignity of the human person, what else does the martyrdom of John the Baptist have to say to us today, to us who seek to follow Jesus' way of truth and life? Two things especially: be courageous and be prepared for persecution.

The basic meaning of the word "martyr" is "witness" and even in everyday life it takes courage to be a witness, to give testimony. Testimony is generally sought only when there is conflict or controversy, when some fact or point is disputed or opposed and it can be very intimidating to have to give testimony.

That is why many criminal cases never go to trial -- people are afraid to press charges, we want to avoid conflict, we want it all just to go away. We know that if we do give testimony, we will also be subject to cross-examination by attorneys who may subject us to character assassination, doing all in their power to discredit us as a witness and thus undermine the credibility of our testimony -- and the same is true for all of us who are called to give witness to Jesus' Gospel of Life today. The witness of John the Baptist is that being a faithful witness requires courage. That is why the word martyrdom has taken on the nuance of being willing to make great sacrifices -- even our very lives -- for the truth to which we give witness, just like Jesus did, if that is what faithfulness to God requires.

If that is the case, then why are we afraid to give witness today to the Gospel of Life when to do so is so much easier now than it was then?

We are very unlikely to be required to shed our blood. The most that we are likely to have to face will be a little unpleasantness. Some of us know all too well the hatefulness that the proponents of abortion sometimes direct against us and how hard it is to turn the other cheek and love them in return anyway, knowing full well that "hurting people hurt people" and in pity lift them up in prayer, knowing that they certainly must have a world of hurt bottled up inside, hurt that has to be eating them up on the inside.

But you know, though abortion is by far the greatest moral evil we face today, Jesus' call to respect the sanctity of life and the intrinsic worth of the human person does not end the day a child exits from his mother's womb -- and it is here that we run into opposition even within the Church. No Catholic has any reason to misunderstand the teaching of the Church regarding abortion; the matter is so clear-cut that the only people who still seem "not to get it" are those who, for their own reasons, knowingly reject the teaching of the Church, and of course -- also for their own reasons -- some of our so-called Catholic politicians.

But what about the other pro-life issues? You can be sure that if you teach what the Church teaches regarding any pro-life issue other than abortion, you will be subjected to a good deal of unpleasantness coming even from fellow Catholics, who -- again, for their own reasons -- reject Church teaching regarding the immorality of in vitro fertilization, embryonic stem-cell research, artificial contraception, sterilization, sexual morality, universal access to health care, economic justice, access to education, help for the poor and needy, euthanasia, and issues related to war, the rights of immigrants and capital punishment. These form a consistent ethic of life -- break one thread and the protection for the sanctity of all life is diminished and soon the whole garment comes unraveled, including -- as we know all too well -- protection even for the child in the womb.

Our goal of replacing unjust laws with laws that protect the sanctity of life and the intrinsic worth of the human person is an objective of the highest priority. Even so, we should understand that changing laws alone will not -- of itself -- solve the problem because that is not where the most basic problem lies. The most basic problem lies in the human heart, both individually and collectively as a society.

If we succeed in changing all the laws but do not change the human heart, gross violations of the sanctity of life will continue, no matter what the law says. Abortions were occurring long before Roe v. Wade, just on a much smaller scale.

On the other hand, if we do succeed in changing the human heart, it won't matter what the law says because people will do what is right spontaneously.

But alas, that is not the world we live in. Moreover, very few of our legislators of either political party are committed to a consistent ethic of life -- including very few of those who are with us on the topic of abortion. Some will take a stand only once they've figured out which way the wind is blowing. So it is our job to get the wind blowing in the right direction by giving courageous and persistent witness to the sanctity of life at all stages of existence, thereby opening the hearts and minds of our fellow Arkansans -- and consequently, God willing, our legislators -- to embrace a consistent ethic of life, the way of truth and life that Jesus both taught and is.

John the Baptist prepared the way of the Lord by calling people to conversion and that required him to identify and condemn the evils of his day -- and we are called to do the same. People flocked to him because they could hear the truth in his words, even when the content of his message was very challenging and indeed unwelcome in many quarters -- is that why he had to give his witness out there in the desert? -- far from "the powers that be"?

Well, it should be no surprise that we too are sometimes "a voice in the desert," especially regarding the whole gamut of pro-life issues that together form a consistent ethic of life. But if we are faithful, people will hear the truth in our words as well. And like with John, we may have to face some unpleasantness, rejection and even worse. But take courage! The truth will prevail in the end. If we are faithful, our martyrdom -- our witness -- will serve to continue building the Kingdom of God, for which John the Baptist -- and then to an infinitely greater degree, Jesus -- paid the ultimate price of shedding their blood.

In his recent encyclical "Caritas in Veritate," Pope Benedict XVI uses the concept of love in truth to describe the common thread of reciprocal rights and responsibilities that derive from the sacredness of the human person. He analyzes the moral implications of the current global economic crisis in the light of Catholic moral theology and shows that life ethics and social ethics together form a consistent ethic of life, insisting that "respect for life ... cannot in any way be detached from questions concerning the development of peoples ... Openness to life is at the center of true development." He quotes Pope John Paul II in "Evangelium Vitae": "Society lacks solid foundations when on the one hand, it asserts values such as the dignity of the person, justice and peace, but then on the other hand, radically acts to the contrary by allowing or tolerating a variety of ways in which human life is devalued and violated, especially where it is weak or marginalized."

The pope then applies the principle of love in truth to the pursuit of justice, the common good and authentic human development in the real circumstances of today's world.

"Openness to life is at the centre of true development. When a society moves towards the denial or suppression of life, it ends up no longer finding the necessary motivation and energy to strive for man's true good. If personal and social sensitivity towards the acceptance of a new life is lost, then other forms of acceptance that are valuable for society also wither away. The acceptance of life strengthens moral fiber and makes people capable of mutual help. By cultivating openness to life, wealthy peoples can better understand the needs of poor ones, they can avoid employing huge economic and intellectual resources to satisfy the selfish desires of their own citizens, and instead, they can promote virtuous action within the perspective of production that is morally sound and marked by solidarity, respecting the fundamental right to life of every people and every individual."

And finally, quoting "Donum Vitae," which was published by the Congregation For the Doctrine of the Faith when Cardinal Ratzinger headed that congregation: "The inalienable rights of the person must be recognized and respected by civil society and the political authority. These human rights depend neither on single individuals nor on parents; nor do they represent a concession made by society and the state; they belong to human nature and are inherent in the person by virtue of the creative act from which the person took his origin. Among such fundamental rights one should mention in this regard every human being's right to life and physical integrity from the moment of conception until death."