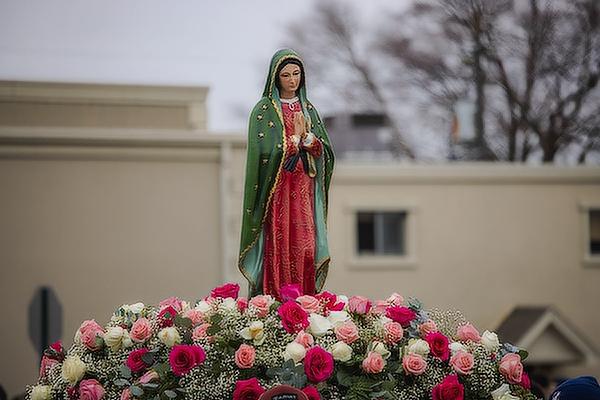 In parishes with a significant population of Mexican immigrants, Dec. 12 will be celebrated as a major feast.

In addition to Mass, there may be food, processions and other devotional practices. In most of those parishes, it will be like so many other events this fall — the first time it has returned to something like normal since “Covidic Time” came in 2020.

Once we learn about the story behind Our Lady of Guadalupe, we can see value in that story for all Catholics, no matter their country of origin. The Blessed Mother appeared to an indigenous peasant, Juan Diego, between Dec. 9 and 12, 1531. Diego was one of the few indigenous persons to have accepted Christianity by this point, despite the efforts of various Franciscan missionaries over the preceding 30-plus years.

"Once we learn about the story behind Our Lady of Guadalupe, we can see value in that story for all Catholics, no matter their country of origin."

Our Lady told Juan Diego to approach the local bishop about building a church on the site of the apparition. At first, the bishop did not believe Diego, but on a later visit after a subsequent apparition, Diego opened his tilma (cloak) and revealed Castilian roses he had picked. Such roses shouldn't have been able to grow in Mexico, especially not in December, and they left an image of Our Lady on his clothing.

It would be a mistake to see Dec. 12 as simply a “Mexican day” or as “Our Lady of Mexico” for at least three reasons.

N First, St. John Paul II gave Our Lady of Guadalupe the title “patroness of the Americas” in 1999. His goal here was to recognize the Guadalupe apparition as important for all of North and South America, as that apparition spurred serious evangelization efforts in the Western Hemisphere. In her appearances to Juan Diego, Our Lady appeared dark-skinned, much like Diego, and wearing clothing typical of the local place and time. This image helped others to view the Catholic faith as not simply a European reality but as something accessible to the native peoples of the “New World” as well.

N Second, Our Lady of Guadalupe is also recognized in the Church as the patroness of the unborn. This is because she appeared pregnant in the apparitions. Being just a few weeks before the Christmas celebration of the birth of Jesus, Our Lady appeared with a black belt, which symbolized for the native peoples a woman carrying a child.

N Finally, all of us can see great value in the celebration of Our Lady of Guadalupe because of her role in evangelization. Prior to the apparitions, few native people of the Americas were willing to embrace the Catholic faith, but in the years following the apparitions, millions were baptized.

Each of us lives now with a baptismal calling to make Jesus known to others, to recognize the goodness of the faith God has given us and thus to want to spread it also. This task is not easy, but thankfully God gives us grace and support of saints, such as Our Lady of Guadalupe, to aid us in this endeavor.

Father Jason Tyler is pastor of St. Joseph Church in Fayetteville and Sts. Peter and Paul Church in Lincoln. He is the diocesan bioethicist.