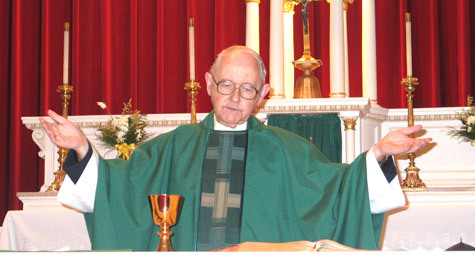 Tara Little
Abbot Marcel Rooney, OSB, celebrates one of his last Masses at St. John the Baptist Church in Brinkley on Thursday, July 19.

Tara Little
Abbot Marcel Rooney, OSB, celebrates one of his last Masses at St. John the Baptist Church in Brinkley on Thursday, July 19.

Abbot Marcel Rooney, OSB, former pastor of St. John the Baptist Church in Brinkley, was recently named president of the new Institute of Sacred Liturgy at the Diocese of Tulsa, Okla.

Before he left Brinkley in July to begin his new position, he sat down with Arkansas Catholic to talk about his time in the small Arkansas parish and his goals for the institute he is developing.

For the past two years, this world-renowned liturgical scholar and former Benedictine liaison to the pope quietly served about 50 Catholic families in Brinkley, located about an hour east of Little Rock. Though he has worked for the Church his whole life, this was only the second time he had done so on the parish level.

The 70-year-old former abbot of Conception Abbey in Missouri, who holds a doctorate in sacred theology, has been a college professor and chancellor in Rome, as well as lecturer, composer, chaplain and advisor to the U.S. Conference of Catholic Bishops' Committee on the Liturgy. From 1996-2000 he served as abbot primate (head) of the worldwide Benedictine Confederation, making him his religious order's liaison to Pope John Paul II.

Because of heart problems, he resigned as primate and returned to his home at Conception Abbey in 2000, where he made his monastic profession in 1958 and was ordained a priest in 1963.

After serving for two years in Savannah, Mo. as a chaplain, he moved to Brinkley in August 2005.

"I've tried to be a good shepherd to them, to be Jesus to them and put them in touch with him as much as possible," he said about his former parishioners. "This is a wonderful group of people."

While in Brinkley, he wrote and led weekly Bible studies and dedicated much time to training of lectors, altar servers and eucharistic ministers.

Outside the parish, he offered monthly days of recollection for the Benedictine sisters of Holy Angels Convent in Jonesboro. He led the parish mission during Lent at St. Michael Church in West Memphis. And he was the featured speaker for the annual Diocesan Council of Women Religious' annual fall meeting last December.

At the Tulsa institute, he will do a lot of the same work with the same focus, but on a much larger scale.

Abbot Rooney said the institute, primarily, would assist Tulsa's chief liturgist, Bishop Edward J. Slattery, as well as the priests, deacons and laity who plan and develop parish liturgy in the Tulsa diocese.

But he stressed, "The institute will be open to all the surrounding dioceses as well."

The nearest program of its type is The Liturgical Institute in Mundelein, Ill., near Chicago, which draws people from a 10-state area. He said he sees the same thing happening in Tulsa, which is only an hour-and-a half from Fayetteville and Fort Smith and about four hours from Little Rock.

Though the institute is still in its early development stages, Abbot Rooney said it will focus on two main components: formation and education.

The formation would include workshops for lectors, eucharistic ministers, cantors and altar servers as well as weekend retreats and parish missions.

Arkansas parishioners could attend a lector workshop in Tulsa, for example, or the institute could offer one at the Diocese of Little Rock for several parishes at once.

The education would include courses in liturgy, history of the Mass and theology of the sacraments, he said. The institute would probably affiliate with a Catholic university to offer degreed programs up to the master's level eventually, he said.

The institute was founded to "teach people to pray. That's what liturgy is really about, to get close to God," he said.

Having public speaking skills are important for a lector, but he said, what really matters is that the lector loves and understands the Word of God.

Taking a Mass history course where the origins and meaning of the prayers are explained, he said, "would help people get past the externals of the Mass, to get to the inner grace which is Jesus in his paschal mystery."

The Tulsa diocese plans to build a campus for the institute, but, the abbot said workshops would begin immediately at existing facilities, while the long-term coursework would start at a later date. The institute's first offering began this month. It is a two-year class on Gregorian chant.

Abbot Rooney will stay connected to Arkansas. He will lead the Diocese of Little Rock priest retreat in June 2008.