Better be good, Santa Claus is already in town 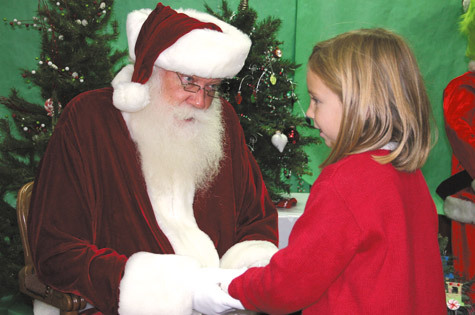 Carroll Dunn, 73, didn't choose the role of Santa Claus -- the role chose him.

Starting in late November each year, Dunn, a longtime parishioner of Christ the King Church in Little Rock, dons all the appropriate gear to become Santa for a variety of charitable causes.

It's a part he's been playing for years, never once asking for compensation.

"It never entered my mind ... It's like I told my friend, I may not be the best Santa, but I'm the cheapest," he joked.

Dunn provides his own spectacles, along with the white-trimmed, bright-red suit and shiny black belt one expects to see any Santa wearing, but it's his all-natural, snow-white beard that convinces the critical eye this Mr. Claus is bona fide.

With minimal grooming, he keeps the six-to-eight-inch growth going all year long.

"If I dressed up like Johnny Cash, they'd still say I look like Santa," he said, laughing, as he lightly stroked his most captivating facial feature.

Dunn lost his motivation to shave after retiring from the security division of Arkansas Power & Light Co. in 1995. His departure from AP&L represented the second such retirement for Dunn, who also enjoyed a distinguished 20-year career as an officer with the U.S. Army.

After years of running a razor across his chin, Dunn's early morning shaving routine soon lost its priority.

"You better be careful," a friend chided him at the time. "It might come in salt-n-pepper gray!"

Instead, the beard grew in as white and fluffy as the newly fallen snow on Christmas morn.

Bedecked in Razorback red, this 6-foot-3-inch Santa Claus once served as co-captain of the University of Arkansas basketball team, though he freely admitted his framed letterman jacket doesn't wrap so easily around his waist these days.

Dunn's stature cuts an imposing figure for those who first meet him, but it belies the hearty laugh and twinkling blue eyes that match a charitable personality reminiscent of St. Nicholas, the legendary patron saint.

Dunn sits for hours helping youngsters ascend his lap for a quick visit at places such as Little Rock's Abba House for unwed mothers, ministered by the Missionaries of Charity, or the Southern Christian Children's Home, an orphanage in Morrilton.

"You look into their eyes and see such beautiful children," Dunn said, reflecting on the visit. "It's heartbreaking."

Dunn's wife, Marty, who helps maintain her husband's rigorous Santa schedule, added, "A lot of the visits are fun for everyone. But some are fun for the kids, even though they break Santa's heart."

Those visits contrast with the more light-hearted ones, such as regular fundraisers to support Christ the King School, or rubbing shoulders with Washington dignitaries at the Clinton Presidential Library where Dunn and his wife serve as docents.

Regardless of the setting, Santa Claus remains highly sought after this time of year.

"I've been so booked, I've had to turn some requests down," Dunn said.

However, if the engagement ever involved under-privileged children, Dunn quickly added, "I'd make room for them."

Dunn hails from Hampton (Calhoun County), where he spends most of his weekdays helping run the family farm and visiting with his siblings. Dunn has also been elected president of the Hampton Lions Club, a charitable organization that assists disadvantaged youth in acquiring prescription eyeglasses and hearing aids.

The club recently donated a state-of-the-art screening tool to the Hampton School District and, if the screening indicates a follow-up, the cost of a visit to an El Dorado physician is covered.

"There is no reason for a kid going through school in Hampton not to be able to see or hear," Dunn said.

Dunn attends Mass at St. Louis Church in nearby Camden when away from home. At the behest of good friend and church secretary, Faye George, he delighted guests as Santa at the tiny parish's annual Christmas party Dec. 19.

George is such a fan; she painted Dunn's family home in Hampton that graces the wall of his west Little Rock living room, next to other Santa paraphernalia collected through the years. On his coffee table sits a family album full of color photos of Santa, a.k.a. Dunn, with each of his grandchildren on his lap. It's lovingly titled, "A Santa They Call Grandpa."

Local artist and fellow parishioner, Vicki Kovaleski, created the first rendition of Dunn as Santa shortly after he grew his beard. Her efforts were adapted for the annual Christmas card fundraiser for Arkansas Children's Hospital in 1998, and sold briskly that year.

As for the naysayers who doubt the existence of St. Nick, Dunn had this admonishment: "Santa IS real. He's in your heart. He's in each one of us," he said.