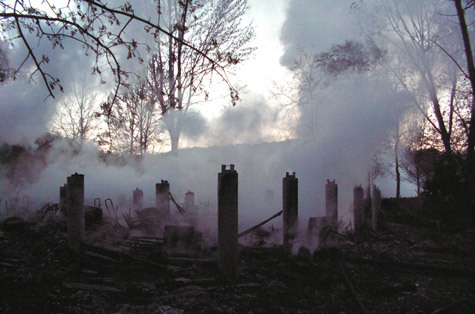 John Michael Talbot, an internationally known musician and general minister of the Brothers and Sisters of Charity, said he noticed flames coming from the chapel about 11:30 p.m. He immediately gathered the 25 monastic and integrated community members to battle the blaze until four different fire departments -- "God's angels" -- arrived 40 minutes later.

"It was not a call," Talbot told

Members and firefighters worked for several hours hoping to stop the fire from spreading next door to the common center, which housed the hermitage's library, kitchen, archives and offices. Talbot's lighting and sound equipment were also destroyed.

"We have to leave on Friday for a month for a tour to Canada," he said.

Talbot said it was still unknown how the fire started. An "electrical spike" was noticed about 9 p.m. that night. An enclosed wood-pellet stove was lit in the chapel, he said.

The 250-seat chapel is used for daily Communion services and Mass.

Talbot said both buildings were built between 1983 and 1989. He estimated it would take about at least $500,000 to replace the buildings and its contents.

While two buildings were lost, firemen were able to save the hermitages where members live, another chapel and their farm equipment. The retreat center is located about a half a mile away.

The public association led by Talbot includes celibate men and women, married couples and their children.

"Everybody was heroic," he said. "People were going into the building to save things."

In true Franciscan fashion, Talbot and the members started immediately seeing spiritual lessons in the disaster.