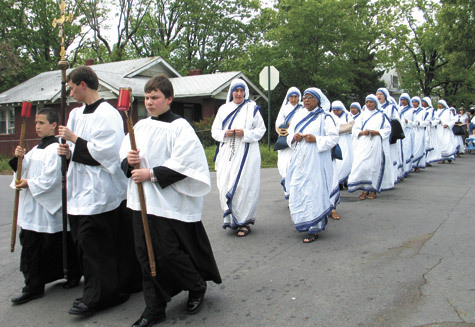 Malea Hargett
Altar servers lead a procession down South Oak Street followed by more than 25 Missionaries of Charity from the United States and Canada who attended the April 24 jubilee Mass.

Malea Hargett
Altar servers lead a procession down South Oak Street followed by more than 25 Missionaries of Charity from the United States and Canada who attended the April 24 jubilee Mass.

"Praise God from whom all blessings flow!" Bishop Andrew J. McDonald made this exclamation during an April 24 Mass expressing his gratitude for the Missionaries of Charity of Calcutta, who for the past 25 years have loved "the poorest of the poor" in Little Rock.

The bishop emeritus celebrated Mass at Our Lady of Good Counsel Church to mark the silver anniversary of the sisters' presence in the Diocese of Little Rock. In addition to the four sisters from Abba House, a shelter for pregnant mothers, their children and homeless women, more than 25 other Missionaries of Charity attended, representing 17 convents from across the central United States and Canada.

A one-mile Eucharistic procession, from Abba House down busy 12th Street, preceded Mass at the nearby church. Altar servers led the sisters, and about 60 others sang hymns and prayed the rosary as they walked. One server followed incensing the Blessed Sacrament, which was carried by Father Terrence Gordon, FSSP, of St. John the Baptist Latin Mass Community in North Little Rock.

More than 200 people attended the 5 p.m. Mass. During his homily, the bishop said the 1982 visit of the late Mother Teresa, now Blessed Teresa of Calcutta, and the sisters had an impact on the diocese.

It was during her visit that Mother Teresa agreed to send her sisters to run Abba House, which is located on South Oak Street in a poor, midtown neighborhood. She spoke from the balcony of the shelter to people who had gathered outside to pray the rosary.

"If I live to be 100 years old, I will remember her words. Those words are seared into my mind and my heart: 'Gold and silver I have not. That which I have I will give you. I will send you my sisters. Together with you, we will make something beautiful for God,'" the bishop recalled.

Four Missionaries of Charity first arrived in Little Rock in 1983. Many have come and gone since, but there are always four serving at Abba House at any given time.

The sisters live in poverty and simplicity like the people they serve.

"A large portion of their day is given to prayer. They serve the needs of homeless women and children; they instruct the poor children in the neighborhood and feed them; they visit the jails on Saturday and comfort the prisoners. Like Jesus, 'They go about doing good,'" said Bishop McDonald, who is the chaplain for St. Joseph's Home for the Elderly in Palatine, Ill.

"Many rich blessings" have come to the diocese in its 165-year history, but among the greatest was the visit from Blessed Teresa and "to have her sisters touch the minds and hearts of the poorest of the poor," he said. "If it were left to me, I would raise Mother Teresa to the altars of the Church as a saint this very day."

Nine other priests concelebrated the Mass, including the current and former pastors and associate pastors of Good Counsel and others who have celebrated daily Mass at Abba House through the years. Among them was Father Joseph Neilson, OCD, of Marylake Monastery in Little Rock. He established Abba House and led the effort to bring the Missionaries of Charity to Little Rock.

The Carmelite priest and others approached the bishop about buying the property for Abba House and inviting the Missionaries of Charity to run it.

"I told Father Joseph and the others, I can get the money from generous people and I did, but I think you're asking the impossible, when you suggest that we invite Mother Teresa," the bishop recalled saying.

Much to his surprise, she came and her sisters followed.

Having the Missionaries of Charity in Little Rock is "a great grace from God," Father Neilson told Arkansas Catholic. "It is a blessing to any city where they are."

"Mother Teresa is here in the person of these sisters because they are doing her work," he said. "Their work is never ending."

Patricia Grabher said it all started when she saw Father Neilson praying outside an abortion clinic in Little Rock in 1979.

Before long the priest was bringing pregnant women who had no place to stay to Grabher's doorstep. When her apartment was outgrown, she and her husband moved into a home in southwest Little Rock where they continued to take in pregnant women in need. Soon more space was needed and they found the former Teen Challenge house and rental house next door for sale on South Oak, where the Abba House shelter and the sisters' convent is today.

The diocese bought the property in 1981 and Grabher ran Abba House until the demands became too great at a time when she had small children of her own. That was when the bishop wrote Mother Teresa to ask her to send sisters to take over the ministry, which they did in 1983.

"These young women needed a father so we called it the Abba House," Grabher said.

Even though many praise the sisters for their service, they are quick to redirect all attention to God. And as a rule, they are not allowed to give media interviews without permission from Sister M. Nirmala, MC, superior general of the Missionaries of Charity in Calcutta and successor of Mother Teresa.

Arkansas Catholic requested and was granted permission April 26 to interview Sister M. Marcella, MC, regional superior of the 17 Missionaries of Charity convents in the central United States and Canada, which includes Little Rock.

Sister Marcella, of St. Louis, was among the 25 Missionaries of Charity who were guests at the Mass and reception. The sisters came to Little Rock from Memphis where they held their regional retreat.

Also in attendance was Sister M. Francesca, MC, of New York City. She was the 10th nun to join the Missionaries of Charity in Calcutta 58 years ago. She knew Blessed Teresa well and was with her when she died in 1997.

The mission, she said, is to care for the "poorest of the poor, meaning those who are not being taken care of someone else in a better way."

In Little Rock this means continuing to care for pregnant women and their small children who have no place to go. Abba House also serves as an emergency shelter for homeless women.

Susan Holmes, longtime volunteer for Abba House and one of the coordinators of the jubilee celebration, said the sisters provide shelter, food and clothing for the women who may stay two to six weeks after giving birth until they find a place to live. The emergency shelter is available to the homeless for up to three weeks.

Holmes said the shelter has 13 beds, but the number of people staying there varies.

The sisters also visit the poor, elderly, shut-ins and prisoners. They distribute food weekly to those in need and run a month-long Vacation Bible School each July.

Sister Marcella could not quantify how many people have been served by the Missionaries of Charity in Little Rock. Though the sisters do keep records, they do not keep track of numbers.

"Mother would say that what we do is like a drop in the ocean. If that drop weren't there, the ocean would be that drop less. So the most important thing is we do what we do out of great love for Jesus and for the Church and the good of the souls that God has entrusted to us, and do it without counting the cost," she said.

Holmes said the sisters take Jesus to parts of Little Rock "where he would not be if they were not there."

"There's not a way to numerically or statistically say this is their impact, but they are a presence, they are a statement," Holmes said. "The people in that neighborhood all know who those sisters are and they all respect them. And that is the neighborhood where there is the greatest spiritual poverty, where people need to have the presence of Jesus the most."

The sisters spend hours each day in prayer, especially in front of the Blessed Sacrament.

Blessed Mother Teresa taught the sisters not to "make the poor come to us, we should go to them. That's why our homes are usually in places were the poor are," she said.

The sisters do not have many possessions. They wear a white and blue sari, which is the traditional dress for women in India, and they carry an "apostolic bag," which is a cloth tote that holds rosaries, religious metals, holy cards and holy water.

"Mother always wanted us to bring something of God to the poor," Sister Marcella said.

The sisters handed out holy cards with cloth and metals that had been touched to the tomb of Blessed Mother Teresa following Mass.

Though Abba House owns a van, the sisters do not have cars. While they do have electricity, they don't use appliances, such as microwaves, dishwashers or washing machines. They don't have computers, cell phones, televisions, air conditioning or even carpet in their home. They do have a heater, but it is rarely used.

"We do give for our poor people in Little Rock air conditioning in (Abba House) because they're expectant mothers," Sister Marcella said. "We don't expect the poor to make the sacrifices that we're making because we choose to make those sacrifices out of love."

The sisters do not accept individual attention and don't celebrate their birthdays.

As a custom, the sisters do not eat outside their convents to prevent the poor they visit from sharing what little food they have with them. During the reception held in their honor April 24, the sisters visited with the guests but did not eat.

Before they left the reception, the sisters presented Bishop McDonald with a garland that Sister Francesca made from scraps of silver and gold wrapping paper cut into the shape of flowers. Sister Marcella said it is an adapted Indian custom to honor someone on a special occasion.

They sang to the bishop, "We thank you with the love of the Lord for we see in you the glory of the Lord," which Sister Marcella called their "little hymn of gratitude."