Celebrating Mass for 50 years a highlight for Father Rossi 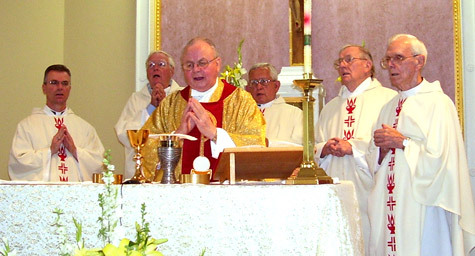 CENTER RIDGE -- More than 200 family members, friends and former parishioners gathered at St. Joseph Church in Center Ridge Sunday, June 1 to celebrate the life and dedication of Father Raymond Rossi, a priest for the Diocese of Little Rock for 50 years.

Msgr. Hebert reminded the congregation that Father Rossi's call to the priesthood was fostered by St. Joseph Parish, by his brothers and sisters and his parents. Father Rossi, who lives in retirement in Hot Springs, echoed this thought in his prayer of the faithful when he mentioned by name 11 people from the Center Ridge area who have answered God's call to the religious life.

At the end of Mass, before dismissing the congregation, Father Rossi showed his chalice, on which his mother's wedding ring is mounted. He told the story of how his mother put her ring on the mantle one night in the 1930s and in the morning could not find it. His mother died in 1941, having never found her ring.

In the 1950s, when Father Rossi was in the seminary, his dad found the ring while he was plowing the garden. Evidently, all those years ago, the ring had fallen from the mantle into the fireplace. When the fireplace was cleaned, the ashes were always sprinkled in the garden. It was only years later that the ring worked its way to the surface and was found.

When asked what was most memorable about his 50 years of priesthood, Father Rossi answered, "I'll never forget my ordination Mass. Surrounded by family and friends. My father was there and he was so happy and pleased. In my 50 years, I have said 19,800 Masses. Saying Mass is still the highlight of my day."

Father Rossi was ordained May 15, 1958, at the Cathedral of St. Andrew by Bishop Albert L. Fletcher. His first assignment was at St. Edward in Texarkana. The next year, he was assigned to Catholic High School in Little Rock to teach. Teaching Latin and religion remained his primary assignment for 20 years, although he served "in residence" in various parishes.

"(The late) Father (George) Tribou, Msgr. Hebert and Father (Lawrence) Frederick were all at Catholic High when I was there. There were 15 priests on the facility. We were all assigned to help out at parishes on the weekend, but teaching was our primary assignment. Things have changed a great deal since then."

During his summer breaks he earned a master's degree in classical languages from the University of Notre Dame. However, after 20 years of teaching Father Rossi lost his voice and had to give up teaching.

His first assignment as a pastor was for the parishes of St. Elizabeth in Eureka Springs and St. Anne in Berryville in 1979. In 1984, he was transferred to St. Peter the Fisherman in Mountain Home with the responsibility of a mission in Yellville. While stationed there, he oversaw the building of the first Catholic church in Marion County.

In 1990 he became pastor of the Church of St. John the Baptist in Hot Springs. From 1996 until his retirement in 2002 he served as pastor of Sacred Heart of Jesus Church in Hot Springs Village.

"In my years of the priesthood, I have had 13 different addresses. I have enjoyed them all. Each one has been a blessing in so many different ways," Father Rossi said.