Recruiting Missionaries of Charity is placed in God's hands 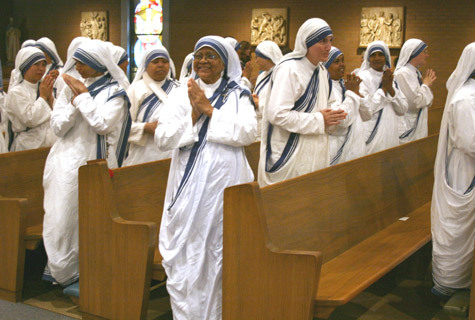 Tara Little
Sister M. Francesca of New York City gives the sign of peace during Mass celebrating the Missionaries of Charity 25th anniversary in Little Rock April 24. She was present at Mother Teresa's deathbed in 1997.

Tara Little
Sister M. Francesca of New York City gives the sign of peace during Mass celebrating the Missionaries of Charity 25th anniversary in Little Rock April 24. She was present at Mother Teresa's deathbed in 1997.

Blessed Mother Teresa of Calcutta founded the Missionaries of Charity to love Jesus disguised in the "poorest of the poor." Since 1950, these sisters have been feeding him, clothing him and giving him shelter through "the least" among us.

By doing these "little works of love" the sisters aim to give those they serve "a sense of God's tender love for them," said Sister M. Marcella, MC, of St. Louis.

The founder also taught her sisters to serve the poor with joy and gratitude.

"If it wasn't for poor people who accept our works of love, then we wouldn't have that opportunity to show our love," Sister Marcella explained. "We don't do anything spectacular; our ways are very small and down to earth. The poor are so humble to accept the small things we do, and allow us to show our love for Jesus in that way."

Mother Teresa's mission began in the slums of Calcutta, India, with only 12 sisters. Today the congregation has nearly 5,000 members worldwide.

Becoming a Missionaries of Charity sister involves an initial formation process, then postulancy and a novitiate. This training is offered in a candidate's home country. In the United States, postulants go to the Bronx, N.Y., and novices continue their training in San Francisco. After completing the novitiate process a sister can be assigned outside her homeland.

Sister Marcella said her religious order does not recruit sisters and relies entirely on God to "direct vocations." Single women interested in learning more are encouraged to "come and see" at the postulancy house in New York.

These sisters take the normal vows of poverty, chastity and obedience, but also take a fourth vow of "wholehearted and free service to the poorest of the poor."

The poorest are those who are "not being taken care of by someone else in a better way," Sister Marcella explained.

In most cases, this means those who are materially poor, but it can include those who suffer from the poverty of loneliness, especially if they are sick or dying.

Mother Teresa often spoke of how the poverty in the West differs from that of developing nations.

"In my opinion," she wrote, "if abortion is allowed in the rich countries, who possess all that money can provide, then those are the poorest among the poor." ("Heart of Joy: The Transforming Power of Self-Giving" Servant Books, 1987)

She died in 1997 but her spirit lives on through her sisters, who affectionately call her "Mother."

"She is our mother, and all that implies is that we're children of the same family," Sister Marcella said.

Sister M. Nirmala, MC, superior general and successor of Mother Teresa based in India, has preserved that sense of family, Sister Marcella said.

No matter what "corner of the world we call her from, Sister is there to hear what we need and help us to make decisions," she said.

As a rule, Missionaries of Charity are not allowed to speak to members of the press. And it was Sister Nirmala herself who granted Sister Marcella permission to speak with Arkansas Catholic.

Sister Marcella spoke with the newspaper by phone in April following a celebration to mark the 25th anniversary of her order's presence in Arkansas.

She is regional superior for the 17 MC convents in the central United States and Canada, which includes Little Rock.

In 1982, Mother Teresa visited the city and agreed to send four of her sisters to run Abba House, a 13-bed homeless shelter for women, pregnant mothers and their young children. The Diocese of Little Rock established it in 1981. The sisters took over the ministry in 1983. Their convent is next to the shelter on South Oak Street, which is part of an impoverished neighborhood Little Rock's inner city.

Aside from Abba House, the sisters visit the poor, elderly, shut-ins and prisoners. They distribute food weekly to those in need and run a month-long Vacation Bible School each July for poor children unable to afford other programs.

Sister Marcella said her congregation doesn't focus on how many people they serve because "Mother asked us not to worry about being successful, just faithful. ... Many, many, many souls have passed through (Abba House) and hopefully they've received something of God's love."

There are always four sisters in Little Rock. Their assignments normally last three years, but Sister Marcella only served in the city for a few months from 2002-2003.

When asked why her term was so short, she said, "In our society, we just prefer to leave things in God's hands. We never ask why. Whatever is asked of us is what God wants of us. Mother always said, 'Give God a free hand.'"

As missionaries they can be sent anywhere in the world at a moment's notice.

This freedom means not "accumulating things that would hold us down."

Each sister has two blue and white saris (their habit), sandals and an "apostolate bag" which holds rosaries, religious medals, holy cards and holy water to give to the poor when they visit them.

They do not own property or receive personal gifts. They live modestly without modern conveniences such as air conditioning, home appliances, computers or cell phones.

Although Sister Marcella did say she is from the United States, she would not be more specific because she didn't want this story to draw attention to herself. The same goes for her age, which she struggled to remember, because she -- like the other sisters -- no longer celebrates her birthday.

The sisters do not eat meals outside their convent, a custom designed to protect the poor from giving "their last bit of food" to their guests.

In addition to service, the sisters' daily routine includes participating in Mass and prayer, especially a holy hour before the Blessed Sacrament.

Sister Marcella repeatedly quoted Mother Teresa throughout the interview to explain how she lives. She said this is because "Mother's words are a light for us."

In a 1996 book, "Blessings of Love," Mother Teresa is quoted describing who her sisters should be. "Each time anyone comes into contact with us, they must become different and better people because of having met us. We must radiate God's love."

Even before her death, Mother Teresa was believed by many to be a living saint. Pope John Paul II, who called her "one of the greatest missionaries of the 20th century," beatified her in 2003.

In addition to her active sisters, Mother Teresa also founded the following orders:

For more information, visit the Missionaries of Charity Fathers Web site at http://www.mcpriests.com. To speak to a sister in Arkansas, call the Little Rock convent at (501) 663-3596.

Advice for her sisters

Blessed Mother Teresa of Calcutta asked her sisters to follow these virtues. "God needs our poverty, not our abundance. These are means of being humble: