Parents want the best for sons, but discovering that can be stressful 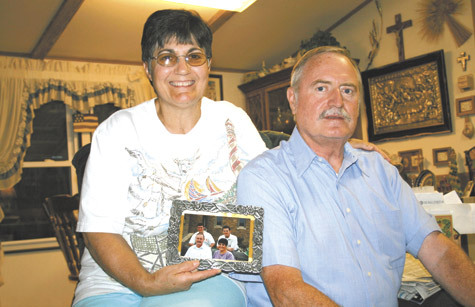 Jodie Hightower
Elizabeth and Manuel D'Almeida hold a picture of their sons, Michael and Edward, July 7 in their home in Vilonia. For the last four years, Edward has been discerning the priesthood.

Jodie Hightower
Elizabeth and Manuel D'Almeida hold a picture of their sons, Michael and Edward, July 7 in their home in Vilonia. For the last four years, Edward has been discerning the priesthood.

Parents have a tremendous influence on their children and are the primary religious educators of them. So, when a son tells his parents he is discerning priesthood, parents experience a wide range of emotions, including fear and worry as well as honor and joy.

When Edward D'Almeida told his parents of his decision, the initial reaction was mixed.

"I kept asking 'Are you sure?'" said Elizabeth D'Almeida, Edward's mother. "You have to be sure. Everyone can serve the Lord, but not everyone can be a priest."

On the other hand, his father said it was a blessing.

"I remember taking the boys at a young age to the altar and offering them to God. I was very pleased with Edward's decision," Manuel D'Almeida said.

Edward D'Almeida, 32, a diocesan seminarian, is set to be ordained a deacon in October in Rome, where he attends the Pontifical North American College. Ordination to the priesthood would follow in 2009. His parents attend St. Joseph Church in Conway.

"We never prayed for our son to be a priest or for vocations, but now it is the center of our prayer life," Elizabeth D'Almeida said.

The Catechism of the Catholic Church explains that parents should teach their children to pray so they can discover their vocation according to God's will. Sometimes that is hard for parents whose vocation is marriage.

"We have four sons. I dreamed about my sons settling down and having wives and families," said Pat Stengel. Her son, Josh, also a seminarian, is on track to be ordained to the priesthood in 2010.

"There is a small amount of sadness that he won't experience married love," she said. "But as a priest he'll experience another kind of love that will be totally different, but just as fulfilling."

Andrew Hart, 25, leaves for Rome this month to join D'Almeida and Stengel at the North American College. He recently graduated from St. Meinrad School of Theology in Indiana. He will attend an Italian language immersion program in northern Italy before going onto seminary in Rome. His parents attend Christ the King Church in Little Rock.

Parents have a double struggle in that they also have to watch their sons struggle with discernment.

"When Josh went through discernment, he was so unsettled," Pat Stengel said. However, once the decision was made he was fine. "As a mother, it is wonderful to see him at peace."

Often that call begins at an early age. Josh's father, Kenneth, said Josh talked about priesthood as a child. He was influenced by his uncle, Father Mark Stengel, OSB, of Subiaco Abbey.

He began praying about being a Benedictine father, like his uncle, in 2000. But he was deployed to Iraq with the Army Reserve in 2002. Upon his return 18 months later, he felt called to diocesan priesthood.

In each of these families, a strong prayer life was emphasized.

"As parents we told our children, if God is calling you to the religious life, be open to that," Evelyn Hart said.

"We're pleased that the values we tried to teach took root," Kenneth Stengel said. "We tried to give (Josh) a good Christian life."

The overall feeling though is excitement with a tinge of worry.

"It is a tremendous privilege and honor to be the parent of a seminarian," said Robert Hart, Andrew's father. "We know it is difficult to be a priest with a 24-hour schedule and demanding workload. Andrew has a realistic approach allowing plenty of time to discern."

For now, these parents are dealing with their sons being half way around the world.

"My worries are of him being so far away and not being able to see him," Elizabeth D'Almeida said. "I send a package every month."

Communication is not cut off though. Both Josh Stengel and Edward D'Almeida call weekly and send e-mail and letters to connect with family and friends.

Andrew Hart, like all new seminarians in Rome, will not be able to come home for two years, a fact that is tough on his parents.

"I told the people at work that I'm going to be fragile for a couple of days after he leaves," Evelyn Hart said. "This is bittersweet. I'm excited for his opportunity, but it is so far away to go for so long."