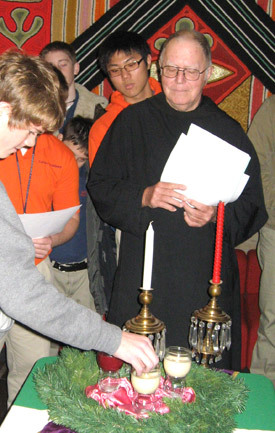 SUBIACO -- Father Hugh Assenmacher, OSB, has been associated with Subiaco Academy since he entered the minor seminary more than 60 years ago.

After marking 55 years as a monk, of which 50 years has been as a Benedictine priest, as well as a teacher, chaplain, choir director and organist, he continues to be available to the students.

Father Hugh was born Gerald Anthony Assenmacher in Billings, Mo., Feb. 16, 1933. He received his primary education at St. Joseph School in Billings and was taught by the Benedictine sisters from St. Scholastica Monastery in Fort Smith. His seventh and eighth grade teacher was Sister Edith Willems, who was from St. Benedict Parish in Subiaco and "talked up" Subiaco Academy and the Benedictine vocation to her students.

At that time, seminary studies were made at Subiaco and "Frater Hugh" was ordained to the priesthood in Little Rock by Bishop Albert Fletcher on May 15, 1958. In the summer of 1958, Father Hugh attended the University of Arkansas at Fayetteville to obtain a degree in organ and general music. He was a teacher at Subiaco Academy until the fall of 1960 when he enrolled at St. Louis University to earn a master's degree in history, not music.

Returning to Subiaco he began teaching religion, history, Latin, sociology and music. He was also an abbey organist from the time he entered the monastery in 1953 until the present.

Over the years Father Hugh filled many jobs in Subiaco Academy, including band director, choral director and one year as head of the scholasticate. In the abbey he has filled the duties of monk, organist and choir master, retreat-master in Coury House, sub-prior of the monastery, novice master and missionary for one year at Santa Familia Monastery in Belize.

Father Hugh has never been a pastor, but has filled in at various parishes and for many years was the student chaplain at Subiaco Academy. As a monk, who believes in the Benedictine motto, "pray and work," he strongly believes in the Benedictine concept of manual labor. In this role he has worked especially in the grounds-keeping department at Subiaco nearly all his years in the monastery, especially in grass cutting, trimming and clean-up.

Visiting old rural cemeteries have also been a favorite recreation as well as hiking on the extensive hiking trails in recent years. Generations of Subiaco Academy students have participated in these "excursions" in the hope of instilling a love of the outdoors and of local history and geography in their lives. He also enjoys "recreational reading," including history, adventure and mystery novels and Westerns.

Currently retired from being a formal member of the Subiaco Academy faculty, he still is available for academy events, assists in student Masses, confessions, pilgrimages and retreats.