Father Keller says 1989 conversion led him back to traditions 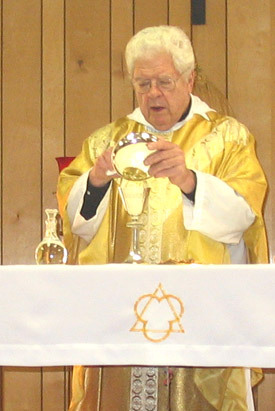 Father Thomas Keller celebrates Mass at Holy Trinity Church in England in December 2007. He recently marked 50 years as a priest.

Father Thomas Keller celebrates Mass at Holy Trinity Church in England in December 2007. He recently marked 50 years as a priest.

ENGLAND -- In 50 years of priesthood Father Thomas Keller has been a pastor, military chaplain, prison minister and coordinator of devotions to Mary and Jesus. He started the first perpetual adoration chapel in Arkansas, and through his pro-life work, witnessed the closing of an abortion clinic in Little Rock.

Yet, the most significant event of his priesthood was the Second Vatican Council and the changing of the Church's liturgy from Latin to English.

Father Keller recalled getting his first copy of the Divine Office in English in 1966.

"I was very excited about the Church getting rid of Latin and using English," he said. "It's very important for people to understand what's going on in the Mass."

Now he thinks he may have been a little too eager because he got caught up in the movement to "modernize" the Church. He said he was attracted to all things new and criticized the old, including the Baltimore Catechism and Marian devotions.

He even opposed Pope Paul VI's encyclical Humanae Vitae ("Of Human Life"), which upheld the Church's opposition to artificial contraception. Though he never preached against it, he said, "I probably ignored it more than anything."

In retrospect, he said he picked "the wrong people to follow after Vatican II."

As a result of the movement taking "too many liberties," he said the teachings of the Church were muddied by what he called "Charlie Brown theology."

"It was more about nice stories instead of just basic catechism and basic teachings of the faith," he said. "We kind of got away from that."

Devotions to Mary and other Catholic traditions were also "belittled."

And many wrongly believed that sex education was no longer important because of Vatican II, he said.

"With birth control and abortion, all the problems with sex sins became so much more serious," he said, "because we thought it was not as important. The Church never said that."

Together, all these things led to "a loss of faith," he said.

Now he understands that Vatican II did not change the Church, it only made it more accessible by allowing the laity to actively participate in liturgy and take on a greater role in decision making, he said.

These days the 75-year-old diocesan priest employs strict adherence to all the Church's teachings with particular emphasis on life issues. Currently he is pastor of St. Rose of Lima in Carlisle and Holy Trinity in England.

He credits his "coming back to my senses" in large part to his return to Mary. He experienced a conversion in 1989 while visiting Medjugorje, Bosnia-Herzegovina, the place where a group of people have reported regular Marian apparitions since 1981.

Father Keller joined the Arkansas Army National Guard in 1969 as a chaplain. In December 1990 he was deployed to Saudi Arabia for six months during the Gulf War. It was there that he "got the rosary back."

In the five years that followed while he was pastor of Our Lady of Good Counsel Church in Little Rock, he started a perpetual adoration chapel, a devotion to the Sacred Heart of Jesus and Immaculate Heart of Mary and built the Life Center on University Avenue next to an abortion clinic that no longer exists. The center houses the offices of Arkansas Right to Life. In 1996 the organization honored him with the Mary Rose Doe Award for his pro-life work.

Father Keller, who was born in Little Rock in 1933, attended the former St. Andrew School before graduating from Catholic High School in 1950. After one-and-a-half years on a Naval Reserve Officers Training Corps scholarship, he left Villanova University, a Catholic college near Philadelphia, to attend St. John Home Missions Seminary in Little Rock in 1952. He was ordained by Bishop Albert Fletcher at the Cathedral of St. Andrew in Little Rock on May 15, 1958.

Father Keller said he has no plans to retire soon because "I wouldn't know what to do." He said he hopes to remain active "as long as I can handle it."

He still loves to play racquetball and played Bishop Anthony B. Taylor in a game in June at the Life Center, which also has a racquetball court.

"He whipped the socks off me," Father Keller said. "I was hoping he wasn't one of those accomplished racquetball players, but he is."