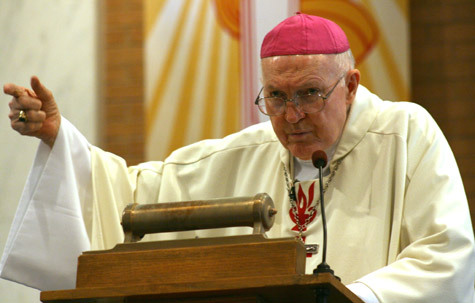 Tara Little
Bishop Andrew J. McDonald delivers the homily April 24 at Our Lady of Good Counsel Church in Little Rock to celebrate the 25th anniversary of the Missionaries of Charity's ministry in Arkansas.

Tara Little
Bishop Andrew J. McDonald delivers the homily April 24 at Our Lady of Good Counsel Church in Little Rock to celebrate the 25th anniversary of the Missionaries of Charity's ministry in Arkansas.

Six years have passed since Bishop Emeritus Andrew J. McDonald moved to the Chicago area to serve as chaplain at a home for the elderly poor.

Though it was difficult to leave Arkansas, he said he loves his work now. There is none of the administrative, personnel or travel demands that come with being an active bishop. He is free to focus on celebrating the sacraments and bringing the presence of Christ to the people, which is why he was ordained a priest on May 8, 1948.

This year marks Bishop McDonald's 60th anniversary of priesthood and 36th anniversary of episcopacy. He returns to Little Rock Sunday, Sept. 7 to celebrate these milestones with the diocese he led from 1972 to 2000.

He will celebrate both the 8:30 a.m. and noon Masses at the Cathedral of St. Andrew. A reception will follow the midday Mass in McDonald Hall.

Bishop McDonald concelebrated the episcopal ordination of Bishop Anthony B. Taylor on June 5 in Little Rock and the following day he sat down with Arkansas Catholic to reflect on his priestly vocation.

Bishop McDonald became chaplain for St. Joseph's Home in Palatine, Ill., in May 2002. This home is one of 32 across the United States operated by the Little Sisters of the Poor, a religious order founded in France.

"They only take care of the elderly poor," he said. "You've got to be 60 years old to get in there, and you have to be poor."

Bishop McDonald, who turns 85 next month, is the last living child of the late James and Theresa McDonald. They had 12 children and he was the second youngest, born Oct. 24, 1923 in Savannah, Ga. He had been a priest for 24 years when he was named the fifth bishop of the Diocese of Little Rock in 1972.

After 30 years serving Arkansas, the bishop hadn't planned to leave, but when the offer came to go north, he said he knew it was the right thing to do.

After his successor, Bishop J. Peter Sartain, took over in 2000, Bishop McDonald said he substituted for priests when they went on vacation or were sick. But since many retired priests were already doing that, he found he had a lot of time on his hands. He played a lot of golf, which is a sport he loves, but after a while, he thought, "I like golf, but not that much."

He has learned that "life is a series of new beginnings." When he was ordained a priest for the Diocese of Savannah, he said he thought he would spend his life there until he was named bishop of Arkansas. Then he thought he would stay in Arkansas but God had other plans.

"If you feel that this is where God wants you at a certain time in your life, it doesn't mean it's just all going to be perfect," he said. "I had to start all over. I had to learn the people's names and take care of whatever their needs were."

The bishop's primary duties are to anoint the sick and celebrate Mass at St. Joseph's, which is home to about 100 residents, many of whom are Catholic. He said many area retired residents also attend his daily Mass, which pushes attendance to 150 people on a regular basis.

Aside from the normal effects of aging, the bishop's health remains well. When asked, he is fond of saying, "From the neck up everything works fine, but the legs and knees aren't that great!"

Without other responsibilities, "I have much more time to do the things that they expect me to do in that home. I have more time to reflect and to pray and get ready for the final exams," he said with a wide grin.

When he was a young priest in Savannah, he said he once heard an aging priest tell his high school students he was retiring from teaching to go prepare for his "final exams."

To live among and spiritually care for the elderly at St. Joseph has been a true blessing for the bishop. The same is true of the sisters' "fidelity and the hospitality" they give to those they serve.

For him, to "meet the needs of those lonely elderly people" fills him with "a better spirit of joy," he said.

The sisters keep the residents active with games and movies. They even have a choir. On the bishop's priestly anniversary May 8, the choir performed their version of "Old McDonald Had a Farm." The melody was the same, but the words were written especially for him.

Bishop McDonald was ordained to the priesthood at the Cathedral of St. John the Baptist in Savannah. After celebrating Mass at St. Joseph on his anniversary, he went home to Georgia to visit the three churches he served as a diocesan priest. The May 10-11 trip was the beginning of a pilgrimage to reflect on his priestly vocation.

Though all his siblings are gone, 39 of the bishop's nieces and nephews attended the May 11 Mass at the Cathedral. "We had a wonderful time," he said.

In addition to serving in parishes, the bishop was chancellor, vicar general, comptroller and judicial vicar for the Diocese of Savannah at various times between 1952 and 1972.

On May 25, Bishop McDonald celebrated a special Mass at St. Joseph Home with Cardinal Francis E. George of Chicago and nine area bishops in attendance.

The Masses in Little Rock will mark the bishop's episcopal ordination anniversary as well. He was ordained a bishop at the Savannah cathedral Sept. 5, 1972.

Bishop McDonald said nobody who gets ordained to the priesthood aspires to be a bishop. So he was very surprised when Pope Paul VI chose him to succeed Bishop Albert Fletcher in Arkansas.

Reflecting on his time leading the Little Rock Diocese, he said, it is like family life, "you have the high moments, and you have the low moments."

The bishop said he always loved celebrating golden wedding anniversary Masses for couples who had forgotten the difficult times and "just say everything was wonderful."

"I would say the same in my years here," he said. "You had those high points, the ordination of young men to the priesthood, confirming the young people, blessing new buildings, witnessing the enthusiasm in the faith of the people. But at the same time you have the lows. The hardest one would be a priest who decided to leave the priesthood."

For him it was like a son telling his father, "I feel I have to leave." He said simply, "it's hard."

When he attended Bishop Taylor's ordination, he said he was surprised by how many Arkansans came to visit him.

"I'm actually stunned by the impact that a bishop has on people," he said.

Bishop McDonald said he would only see most parishioners when he visited for confirmations or building dedications.

"I didn't realize there were that many connections," he said.

Part of that connection may come from the bishop's ability to get personally involved in people's lives, particularly with families enduring a tragedy.

Marian Swift, who has been Bishop McDonald's secretary since 2000, said, "He just has that compassion. It's like he feels that pain in his heart. I think of the Good Shepherd: he holds you and tries to comfort you."

Swift said the bishop is still very connected to Arkansas. She types his homilies and correspondence daily. Every three months she mails a packet of his writings to 225 people worldwide. He continues to get a lot of mail at the diocese.

"He makes friends wherever he goes," she said. "He keeps up correspondence with these people, and they keep up with him."

"He just puts his heart and soul into people. Even just with everyday encounters, he looks for the story behind people. He wants to know about you, he wants to know who you are," she said. "I think it's like when Jesus said, 'Be fishers of men.' I think that's what he's doing, he's fishing. That's what he's been doing for 60 years; he's a fisher of men, fishing for Christ."

When he describes the blessings of priesthood, Bishop McDonald said he thinks about the multitude of selfless people throughout his youth who taught him how to serve others.

He said his parents provided a "good, stable Catholic family to give a good example to us the children." His parents, "didn't compel any of us to get out and become nuns or to become a priest, but they set the framework where the Lord could pass through our lives and call us to do those things."

He was also grateful to the priests and religious sisters who nurtured him at the seminary. "They gave their lives to give us an opportunity to get the education and formation we needed to be priests," he said.

And the priests and parishioners in Savannah helped form him for the episcopacy. As assistant pastor at Our Lady of Lourdes Church, the elderly pastor, "let me fly," Bishop McDonald said. "He didn't have a jealous bone in his body."

After 85 years, he looks back with gratitude.

"I give thanks to God for life, for family, for faith, for vocation," he said.