Sister DeChantal gets a birthday surprise

For her 102nd birthday, her younger brother makes a special trip 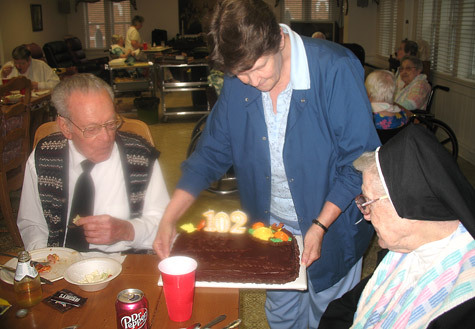 FORT SMITH -- Can birthday wishes still come true for 102 year-olds? Sister DeChantal Hyland, OSB, discovered that they can on Oct. 7, when her younger brother came for a surprise visit from St. Louis.

Although Sister DeChantal had nine sisters and five brothers, Brother Gerald Hyland, SM, 86, held a special place in her heart. The baby who had been born after she had entered the novitiate at St. Scholastica Monastery grew up to become a soldier in World War II. In 1944, when he was 22, Gerald was seriously wounded right before the Battle of the Bulge.

Sister DeChantal, who was teaching in Nazareth, Texas, living near their parents, waited anxiously for news that Gerald had come home safely. The French hospital where he was recovering was bombed by the Nazis, but fortunately he and the other patients were evacuated. Finally, after finishing rehabilitation in an Army hospital in San Antonio, Gerald came home to Nazareth.

"He sat down with my parents and me and said, 'I'm going to talk about what happened just once, and I'm never going to talk about it again,'" Sister DeChantal said, remembering the moment as if it had just occurred. "Afterwards he said he wanted to become a priest to make up for all the evil in the world."

Being unable to lift his arms, Gerald was not able to become a priest. Instead, he became a Marianist brother, spending his career teaching English and religion at Vianney High School in St. Louis. He retired 20 years ago.

The trip from St. Louis to Fort Smith is difficult for an 86-year-old disabled veteran, and Brother Gerald had not been able to see Sister DeChantal or his 89-year-old sister, Sister Frances Anne Braddock, OSB, who also lives at the monastery, for more than 10 years.

When Joe Wasson, a videographer at the Fort Smith Historical Society, interviewed Sister DeChantal for a DVD in April, he was touched by her story of Gerald and the way her eyes misted over and her voice softened whenever she looked at his picture on her dresser. He became determined to find a way to bring Brother Gerald and Sister DeChantal together again. After calling up several large Fort Smith corporations, he found one that would be able to take Brother Gerald back home to St. Louis a few days after Sister DeChantal's birthday.

There are no non-stop flights from St. Louis to Fort Smith, and the corporation, which donated Brother Gerald's return trip anonymously, wasn't heading down from St. Louis to Fort Smith earlier that week. After learning that American Airlines flew non-stop to Bentonville, the Marianists bought Brother Gerald a one-way ticket and he was on his way to his sister's party.

When Brother Gerald arrived at the monastery Oct. 6, he hid in the break room waiting to surprise his sister. As she wheeled by, he came out and said, "I'm your brother Gerry," and she said, "No, that's not possible." When she realized who he was, Sister DeChantal grabbed his hand and wouldn't let go as they caught up on the past 10 years. Sister Frances Anne joined them at lunch time and the non-stop laughter began.

"America doesn't know that people 85 to 102 can be very entertaining, but the three Hylands sure are," Wasson said.

"I never dreamed I'd be 102 years old with a crooked little finger," Sister DeChantal said.

The three siblings spent the next three days together. Sister Frances Anne made purple rosaries while repeating Sister DeChantal's soft-spoken comments to Brother Gerald, who is hard of hearing.

"I think Frances Anne is getting a little tired," Sister DeChantal said.

Of the 15 Hyland siblings, only five are still living. Two sisters live in Texas but were too ill to visit.

When Brother Gerald left for St. Louis on Friday, Sister DeChantal went back to her usual schedule -- Mass in the chapel, followed by breakfast and a good hour or so reading the sports pages in the Community Room to see how the Cardinals, Razorbacks and Cowboys are doing. That is followed by taking a walk, pushing her wheelchair, having lunch, saying noontime praise in the infirmary, taking a nap and getting up in time for the 3 p.m. rosary.

"Our prayer life keeps us going," Sister DeChantal said. Along with her hopes that the Cardinals might make it to the playoffs in 2009.