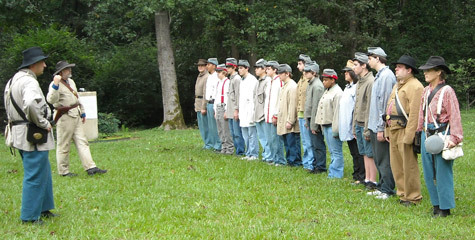 "I am very excited to see the level of student interest when it comes to preserving our local history," Ron Kelley, an English and history teacher and sponsor of the newly formed student historical preservation group, said. "What better way to teach the exciting history of the area than to let the students re-live it?"

Dubbed "the Jefferson Guard Historical Preservation Corps," the history club at St. Joseph is the first of its kind in Arkansas.

Named after the famous Arkansas Militia prior to the Civil War, the Jefferson Guard saw action as early as April 1861 when shots were fired into the river at a Federal boat supplying then-Union-occupied Fort Smith. After secession, the same group of men mustered into the 15th Arkansas Infantry under the command of Patrick R. Cleburne, who became a well-known general from Arkansas during the Civil War.

Kelley said, "We will not only portray and concern ourselves only with the Civil War but rather a comprehensive inclusion of historical sites around Pine Bluff, whose history we should all be very proud of."

On Sept. 20, the students formed up and began instruction on living history at Camp White Sulphur Springs at the historic cemetery on Sulphur Springs Road under the supervision and instruction of the 1st Arkansas Infantry, Company D. At the event, Kelley said the students dressed in Civil War-era uniforms on loan from the living historian organization, the 1st Arkansas Infantry. They were taught Civil War military drill maneuvers, how to fire a Civil War musket and basic knowledge of soldier life during the Civil War. The cadets also learned how to fire cannons in the artillery section.

On All Souls' Day, Nov. 2, the cadets went with St. Joseph pastor Father Warren Harvey for the blessing of graves where Kelley played "Tattoo" and "Taps" for fallen soldiers.

"'Tattoo' was an old bugle call written in 1616 during the 30 Years War to signify a time of rest for soldiers," Kelley said.

That event took the students "into a whole new realm of historical preservation covering the era 1792 through statehood in 1836 of which there are currently no active preservation groups in the area covering that time period," he said.

One of the sites visited was the cemetery at St. Mary Church in Plum Bayou.

"St. Mary's may well be the oldest structure in Arkansas, having been built in 1792 at its original location in Arkansas Post before it was moved," Kelley said.

The 20 cadets at St. Joseph High School were officially introduced to their peers at the "See You At The Pole" on Sept. 24. Veterans were encouraged to attend. Historical preservationist Edgar Colvin spoke about the various flags that have flown over Arkansas throughout its history, including the Spanish flag, the French flag and several versions of the American flag. The Jefferson Guard also unveiled its flags on loan from the 1st Arkansas Infantry, Company D.

For more information on local Civil War events related to The Jefferson Guard, go to http://www.arkansastoothpick.com. Kelley said Arkansans are encouraged to send any information on historical sites and cemeteries that are in need of preservation and restoration to .