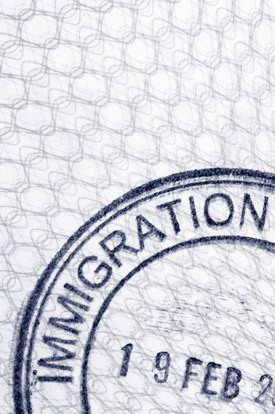 Five months after being ordained the bishop of Little Rock, Bishop Anthony B. Taylor is issuing his first pastoral letter in hopes of teaching his flock about the human rights of undocumented immigrants.

"I Was a Stranger and You Welcomed Me: A Pastoral Letter on the Human Rights of Immigrants" was introduced to the priests of the state Nov. 5 during a study day. On Nov. 7, diocesan employees gathered at St. John Center for a similar event.

Bishop Taylor said he believes the human rights of immigrants is a topic that many Catholics are not informed about properly.

"I hope that people will open their hearts to the call of Jesus in our time," he said in an interview with Arkansas Catholic. "There is lots of information people don't have at their disposal that is really relevant to this topic. More than that, I hope it goes down from their head to their heart and see what the Lord is asking of us. ... It is the biggest area where the teaching of the Church is not well-known."

Bishop Taylor, who is fluent in Spanish and has worked in Hispanic ministry for 28 years, said he believes being able to immigrate to another country is an "intrinsic human right."

"They do have a right to immigrate when circumstances require," he said.

He agrees illegal immigration is bad because it is nearly impossible for immigrants, predominantly from Mexico, to come to the United States legally.

"We do support them being here illegally. They have a right to be here," he said. "We are here to serve everybody. Not just Catholics. We are not a country club. We are here to bring the love of Jesus to everybody. They are here because there is no way to get documents, not because they don't want documents. They do not want to immigrate without documents. ... You can't be obliged to do what you can't do. Immigration laws should correspond to the reality."

The 30-page document includes five appendices with additional resources, information on what the U.S. bishops' conference has said and supporting Scripture references. The bishop consulted with several priests and laypeople over the past three months when writing the letter.

Booklets of the letter will be made available in all parishes and missions in English and Spanish.

In order to get parishioners to read and discuss the letter, Bishop Taylor asked Cackie Upchurch, director of Little Rock Scripture Study, to write a three-week Advent study guide for small group sharing.

"The purpose of the pastoral letter is not to just go on record but rather to teach," he said. "People learn not just by reading a document but also by dialoguing and sharing with others, especially if the concepts are new and are hard to get your mind around."

The pastoral letter will be distributed to parishioners on the feast of Christ the King Nov. 23. At the Masses, parishes are also asked to play a recorded homily by Bishop Taylor. The study sessions are expected to be held in churches through Dec. 20.

The season before Christmas was chosen because "Advent is a time of longing and expectation, a time of hope," Bishop Taylor wrote in his letter introducing the pastoral letter. "What changes do we need to make here in Arkansas in order to ensure that today's Marys and Josephs -- today's Marías and Josés -- receive a warm welcome truly worthy of the Savior whose birth we celebrate on Christmas?"

Bishop Taylor said immigration is a likely topic of several bills in the General Assembly at the State Capitol in January, and he hopes laypeople will be educated about the topic before the legislators meet.

"I hope there will be a change in American law that provides for the protection of the human rights of everyone in this country and that immigration reform is in the interest of the common good."

In the pastoral letter Bishop Taylor has not suggested specific changes in the law he would like to see.

"My role is that of teaching faith and morals," he said. "It is for the laypeople to come up with ways to implement that."

Copies of the pastoral letter will be sent to the state's representatives and senators.

"Hopefully they'll learn from the mistakes made in Oklahoma," he said. "Even economics, you have to learn from that. If you think the economy is in trouble now, do we need more disruption in our economy now?"

Oklahoma legislators passed House Bill 1804, and it went into effect Nov. 1, 2007. The law, believed to be the toughest illegal immigration law in the country, makes it a felony to transport or shelter undocumented workers and requires employers to verify all of their employees are here legally. Many employees moved to Texas and Arkansas after the law started being enforced, thus hurting the agriculture and service industries.

While serving as a pastor in Oklahoma until his ordination June 5, Bishop Taylor said, "It is so sad to see the way people's spirits get crushed by oppressive things that happen to them, by mistreatment in the workplace," he said, "where people are powerless and they were doing everything right."

"It is not a topic that I am uncomfortable with because the teaching of the Church is so clear," he said. "I am anticipating getting feedback of all sorts. I am especially anticipating feedback from persons whose eyes have been open to something that they haven't given much thought to and to the conversion experience that that stimulates."

The complete pastoral letter is available to download in English and Spanish at www.dolr.org.