Retrouvaille offers hope and support for couples in pain 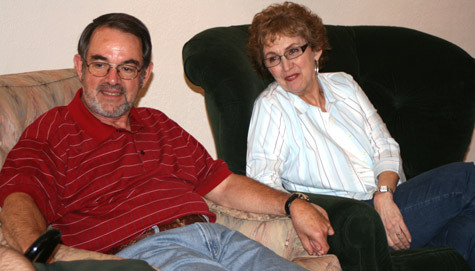 Like all couples, Jo and Quentin Lauer don't always see eye to eye. He is extroverted, while she is introverted. He is "more light-hearted" while she is "more serious." And then there's the obvious: he's a man and she's a woman. That fact alone makes communication difficult.

For many years, they struggled with their differences. As parents, "I was the tough drill sergeant," she said.

"And I thought she overreacted," he added.

When they tried to talk, Jo spoke symbolically while Quentin was literal. He thought she meant what she said, and she thought he should understand what she meant.

When they argued, he walked away, which only made her confront him more aggressively.

"There was a great deal of hurt. I judged that Quentin didn't care enough about the marriage or me to fight with me," Jo said. "He felt threatened because there was this raging woman."

The problems in their relationship became more apparent with each trial they endured. The couple married in September 1969 and started a family immediately. Over a six-year period, they had three children and three miscarriages. Then a three-year financial struggle plagued them. Worst of all, they agonized over their oldest child, who had severe emotional and behavioral problems.

Looking back, their involvement in the Charismatic Renewal kept them together. Although they had always been active at their parish, Immaculate Conception in North Little Rock, participation in the charismatic movement, beginning in 1972, helped them develop a personal relationship with God.

"Having that personal relationship with the Lord really helped us hang on and not go the divorce way," Jo added.

Throughout their marriage the Lauers reached out for help.

"We went to counselors and church programs where they talked about marriage; we read all the books," she said.

They made progress and got through the really tough times, but it wasn't until they went to a Retrouvaille weekend in 1990 that a real transformation began to take place.

"Retrouvaille," pronounced "re-tro-vi," is French for "rediscovery." It is a Catholic ministry developed out of Worldwide Marriage Encounter. It started in Quebec, Canada, in 1977.

Retrouvaille came to the Diocese of Little Rock in 1989. It consists of a weekend experience followed by six follow-up sessions. These occur the six consecutive Saturdays after the weekend. After completing these post-weekend sessions, couples are invited to attend Continuing Our Retrouvaille Experience (CORE) meetings monthly.

"It's like all the lights came on," Quentin said of his Retrouvaille weekend.

"The communication technique that Retrouvaille uses was just amazing for us," Jo said. "The conflict management technique just worked great."

"It's common sense," Quentin said, "but often in relationships, you don't use common sense."

"I felt like I learned more about Quentin on that weekend through his sharing his feelings, then I had in 20 years of marriage," she said.

Jo, 67, and, Quentin, 65, have been involved with Retrouvaille ever since. Today they coordinate the program on a volunteer basis. It is a ministry of the diocese's Family Life Office and is held at St. John Center in Little Rock.

"We got so much out of Retrouvaille, that we wanted to give back and we've been involved for 18 years now," he said.

Each weekend is led by three married couples who have gone through Retrouvaille themselves and a priest. These couples give presentations, and then allow participants time for personal reflection, which is followed by private discussion between spouses. There is no group discussion or social interaction with other couples during the weekend.

Jo said when the weekends begin the tension in the room is so high "you couldn't cut it with a knife." Often couples sit turned away from each other or they sit apart all together.

And then "by Saturday evening they're sitting closer and holding hands," Quentin said.

"A lot of couples that come to Retrouvaille, they think they're so far out, they're 180 degrees apart, and some are," he said. "But very often couples are only about 30 degrees apart, but that's all they're focusing on. They forget about anything good that's ever happened in their marriage because of the hurt that's happened."

"Most of the couples have lost any sense of intimacy with each other," Jo said. "They come angry, hurt, desperate and lonely thinking they're the only ones."

The key to the weekend is to rediscover what they lost.

"We do stress throughout the weekend, that our purpose is not to fix problems but to stay focused on sharing feelings," Jo said.

Rather than pick up old arguments, couples are asked to focus on what needs to be done to begin the healing process, she said.

"If couples can reconnect emotionally on the weekend, they are much more willing to look at how they deal with their issues," she said. "We made the decision on our weekend that no issue was going to be more important than our relationship."

Confidentiality and privacy are paramount at Retrouvaille. Couples are not asked to share their problems during the weekend. And the names of attendees are not shared outside the program.

"We use first names only at all of our meetings," Jo said.

Retrouvaille leaders are not trained counselors, so they do not offer counseling. The program offers couples tools for communication and support so they can learn how to help themselves.

The post sessions allow couples to take on their problems, Quentin said.

These four-hour sessions tackle one to two issues each. Like the weekend, a team couple gives a presentation on an issue and then spouses spend time discussing that issue in private. But unlike the weekend, couples are allowed to come back together for a group discussion and share if they wish.

"Family of origin (differences) in our opinion is one of the major contributing factors in marriage breakdown," Jo said.

CORE meetings are similar in format to post sessions while they offer couples ongoing support as they rebuild their relationships.

"If they need to go, we'll get them in contact with somebody," Quentin said.

Though Retrouvaille is a Catholic program, couples of all faiths are welcome. On average about 10 couples attend a weekend; half of these are Catholic, Quentin said.

"Most of the couples seek out Retrouvaille because they know it's Christian-oriented," Jo said. "By and large, most of the couples we get seem to be highly motivated. They're there to make those marriages work."

In recent years, the Lauers have gotten a lot of couples in second marriages.

"They know that divorce was not the answer with the first one, and they're wanting the second one to work," Jo said.

Occasionally couples do leave during the weekend. And even for those who stay, Quentin said, it is not unusual for them to say, "'You know I almost left Saturday afternoon' because they'll hit a real hurtful area and they've never dealt with those hurtful areas. And the first thing to do is run from it because it's going to take some work to get over that."

That is normal, he added.

"The only couples that ever scare us on a weekend are those who tell us everything's going great." Because that means, "you're not dealing with what you should be," Quentin said.

There is no formal or accurate study to show Retrouvaille's success rate, but Jo said programs across the country compare notes and generally find that 60 to 65 percent of couples who go through the ministry are successful.

Success is defined as couples who are still together five years after their Retrouvaille experience, she said.

The program is totally self-sufficient and does not receive outside funding to operate. Participants are asked to cover the cost of the weekends. A registration fee of $100 is collected in advance and the rest is taken up during the weekend. All together the weekends run between $400 and $475 a couple.

Quentin stressed, however, that no couple is ever turned away for being unable to pay.

The Lauers have been married 39 years and feel their marriage gets better every year.

"We've got a whole new marriage," Jo said. "Our marriage is better than anything I ever dreamed we could have."

"We tell couples on the weekend, we would go through all the pain again if we knew we could be where we are right now," Quentin said.

Retrouvaille even got them through the toughest challenge to their marriage, the loss of their oldest child in April 2007. Their daughter, who struggled emotionally all her life, died of a drug overdose at age 36, leaving behind a husband and 4-year-old son.

"I am not sure our marriage would have survived had we would not had all those years in Retrouvaille where we shared our feelings and our thoughts with each other. We know the divorce rate for parents who lose a child is astronomical," Jo said.

"We grieved very differently, but it actually drew us closer," Quentin said.

Jo offered this encouragement for couples who are hurting.

"No matter how tough it is, if they want the marriage to work, and they're willing to do what they need as individuals to make it work, it will work," she said.

"We've seen some couples you never thought would make it," Quentin said.

Couples "who have come back from really amazing depths of pain and have restored their relationships," she said. "Everything from infidelity to pornography, family of origin stuff, drug and alcohol abuse, they're doing it."

Retrouvaille weekends will be offered on the following dates:

All weekends are held at St. John Center in Little Rock.

To register, download the Retrouvaille brochure from the diocesan Web site at http://www.dolr.org/offices/familylife/services.php. For more information, call the Family Life Office at (501) 664-0340 or Jo and Quentin Lauer at (501) 835-7537.