Recovering couple says 'any marriage is worth fighting for' 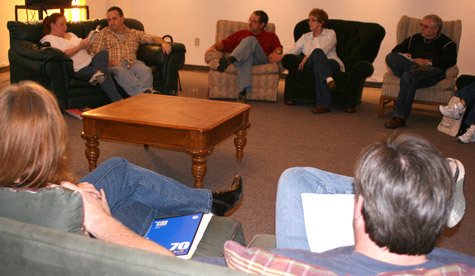 (Note: "Amanda and Edwin Smith" are aliases. The couple asked that their real names be withheld from this article.)

Amanda and Edwin Smith liked to party on weekends. They became "drinking buddies" while dating and continued to do so into their marriage. Though alcohol had always been part of their social life, over time, its importance grew. It grew to the point that in 2000, they realized that drinking was no longer a choice, it was an obsession.

"We crossed a line and once you cross that line, you can never go back," Edwin Smith said.

They had two sons, ages 9 and 11 at the time. Both held down jobs and were active at church and school. Edwin was a baseball coach and Scout leader. Amanda taught art classes at school. They were active in the Parent Teacher Organization.

Yet outside their family, no one knew they had a problem. Even though they drank socially before, their addiction caused them to withdraw into their home, where they drank each night until they passed out.

"When you're an alcoholic you are physically addicted to alcohol and if you put it in your body, you want more," Edwin said. "You're mentally, spiritually, physically obsessed with alcohol."

This misery only got worse over time. The family had attended Christ the King Church in Little Rock, but stopped going.

"For about three years, they were raising themselves," Amanda said of her children.

While the boys slept, Amanda and Edwin drank and fought with each other. When it got physical, she called the police. Three times they came, but no one was ever arrested. They verbally abused their children and each other.

On the morning of Oct. 5, 2003, like many others, Amanda woke to hear stories from her children about what she had done the night before. She had no memory of her behavior.

"The boys were telling me what I had done, and I was horrified," she said.

That horror caused her to respond when her brother and sister came to her house to stage an intervention.

Her husband wasn't ready to listen.

"So I packed my bags and left," Amanda said.

She entered an alcohol treatment facility in northern Arkansas and remained there until Nov. 9. She returned home to find her husband drunk.

Amanda told her husband, "If he was going to drink, then he wasn't going to have me and the kids."

So whenever he drank, she and boys left and returned home after he passed out.

This went on until Dec. 14, 2003. Amanda gave him a choice, stop drinking or leave. He stopped. After he "detoxed" himself, like her, he started attending Alcoholics Anonymous.

Both have been sober ever since.

Although they had stopped drinking, the behaviors that come with alcohol remained.

"Being sober put an end to the physical abuse, but it didn't stop the mental abuse," Amanda said.

The effects of abuse and neglect left them, like their sons, raw and broken.

The couple took their sons to counseling and to Al-Anon, a support group for the families of alcoholics. But they had yet to address the problems in their marriage.

"We weren't getting along," Amanda said. "There was a lot hurts; a lot of resentment."

"We just didn't know each other anymore," Edwin said.

A little more than a year later, Amanda went to speak to a counselor and was given a brochure for Retrouvaille, pronounced "Re-tro-vi."

Amanda took it home to her husband, and he took this as a sign of how unhappy she was.

"I figured it was probably a pretty good clue that the brochure asked, 'Is your marriage hurting?'" Edwin said. "I thought, 'We've got to do something because what we've got is not working.'"

He registered them for the next Retrouvaille weekend held three weeks later in February 2005. (What is Retrouvaille? See page 15.)

The experience broke the ice and they shared "a lot of hugs; a lot of crying," Amanda said.

"The weekend made me realize that love is a decision. I can either decide to love or not to love," Edwin said. "I also learned that feelings are neither right or wrong."

They also learned tools to be able to communicate their feelings.

"I realized that she has the right to her own feelings regardless of whether I feel she is wrong or right," he said.

"It helped me to see (Edwin's) feelings and him to try get in touch with his feelings, because for so long, the only feeling I saw was anger and rage," Amanda said. "Those were the only feelings that he was comfortable sharing."

They attended all six consecutive post sessions in the six weeks that followed. "We knew we needed all the help we could get," he said.

Being around other suffering couples made the Smiths realize they were not alone.

"The other couples just really drew me in. I felt really close to them and that there was hope. There was living, breathing hope right there in front of me. I knew there was hope," Amanda said.

"As a couple we all struggle, some more than others," Edwin said. "And if they can do it, if they got through their heartache and pain, then we can get through it too."

And they did get through it. After Retrouvaille Amanda went to reconciliation at Christ the King and before long the couple started marriage counseling with the pastor. He helped them learn how to pray together and the family started going to church again.

Even though the Smiths were married in the Church, Edwin was not Catholic. In June 2005 he started the Rite of Christian Initiation of Adults process and the following Easter he joined the Church.

The couple continued to attend AA and the Continuing Our Retrouvaille Experience (CORE) meetings. These support groups help them stay focused. AA helps keep them sober while CORE teaches them how heal their marriage.

"There's only a small percentage of people who actually get sober and stay sober for any length of time," Edwin said. "For me, it's a daily medication when I do the things I'm supposed to do to stay sober 'cause I'm only one drink away from getting down in the gutter again."

As for the relationship with their sons, Amanda and Edwin said they have been rebuilding it slowly like the rest of their lives.

"They've blocked a lot of it out for self-preservation," Amanda said of her sons. "At the beginning when I told our youngest I was sorry, he said he couldn't forgive me because I couldn't remember what I had done. That was really hard."

"I just celebrated five years and he wrote in my card, saying, he loved me and he was proud of me for all the hard work I've done," she said.

"I'll always remember the pain. The pain is partly what's keeping me sober," Amanda said. "If I forget what it was like, then I am destined to repeat the past."

With all the work they were doing, there was just one thing missing in their lives -- fun.

Last year, when their oldest son and nephew (who was also living with them) graduated high school, the family took a vacation to Hawaii. The older boys now attend the University of Arkansas at Fayetteville. Their younger son is still in high school.

Amanda, 47, and Edwin, 48, have replaced alcohol with ballroom dancing. They like the cha-cha, waltz, rumba and swing.

They give talks at both CORE meetings and weekend post sessions. They are currently working on their first talk to be given at a Retrouvaille weekend. They have been married for 26 years.

Now, the Smiths say they have a whole new marriage.

"We just continue to build on what we've done," Edwin added.

For them, it is hard to separate AA from Retrouvaille in the process of how they got to where they are now.

"In both programs, you have to be honest, open and willing," Amanda said. "If you're willing to take the steps, the hope is endless."

"You got to do the work," she said, but "miracles happen."

"Any marriage is worth fighting for," he said. "If Retrouvaille can save our marriage, it can save anybody's marriage. No question about it."