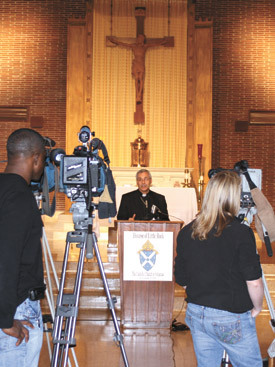 Tara Little
Bishop Anthony B. Taylor addresses members of the media about his pastoral letter on immigration in Morris Hall Chapel on the campus of St. John Center in Little Rock Nov. 6.

Tara Little
Bishop Anthony B. Taylor addresses members of the media about his pastoral letter on immigration in Morris Hall Chapel on the campus of St. John Center in Little Rock Nov. 6.

Bishop Anthony B. Taylor held a press conference to introduce his first pastoral letter, "I Was a Stranger and You Welcomed Me: A Pastoral Letter on the Human Rights of Immigrants," Thursday, Nov. 6.

Speaking to reporters and Diocese of Little Rock staff, he said, "As you know I come from Oklahoma where last year some very harmful legislation was enacted mainly due to fear, and certainly without any consideration of what Jesus Christ and our Christian faith has to say about this matter."

The bishop released his pastoral letter Nov. 5, the same day he led a study day to discuss it with about 80 priests from across Arkansas. On Nov. 7 he facilitated a similar event for diocesan staff. A study day for deacons is scheduled for Nov. 22.

Bishop Taylor wrote the letter now to allow parishes to study it during the season of Advent. He recorded a homily to be played at all Masses throughout the diocese on Sunday, Nov. 23, the feast of Christ the King.

The diocese printed 30,000 copies of the 64-page bilingual booklet, to be distributed to parishioners. A two-page summary of the letter is also available. These documents, along with an Advent study guide, can be downloaded from the diocesan Web site at www.dolr.org.

Bishop Taylor also introduced the pastoral letter to an estimated 1,500 Hispanics Nov. 8 at the annual Encuentro Hispano. He explained the document and his reasons for writing it during his homily at an afternoon Mass, which he celebrated at the Arkansas State Fairgrounds in Little Rock.

During the press conference the bishop said he hoped the timing of the document would also benefit Arkansas legislators.

"It is my hope that the Arkansas Legislature, which convenes in January, will have the courage and wisdom to do what is right," he said.

In response to a reporter's question, he said he did want to prevent Arkansas lawmakers from introducing legislation like what became law in Oklahoma.

House Bill 1804, passed by Oklahoma legislators, went into effect Nov. 1, 2007. The law, believed to be the toughest illegal immigration law in the country, made it a felony to transport or shelter undocumented workers and required employers to verify all of their employees are here legally.

Before being named bishop of the Diocese of Little Rock in April, Bishop Taylor was pastor of Sacred Heart Church in Oklahoma City, a parish which is 95 percent Hispanic. He witnessed many negative effects of the law through his parishioners and described how Hispanics felt rejected, hurt and fearful.

"They've sent letters back home to their families bragging about here," he said. "They work very hard hoping to earn the favor of their employer by showing them what a good person they are, how reliable they are, and then it just gets thrown back in their (faces)."

He described what happened to one family when the mother of a six-week-old and 2-year-old just disappeared and no one, not even her husband, knew what happened to her. They later learned she was deported. The father and children were legally in the United States, but they couldn't stay because the children had to be with their mother, so the family returned to Mexico.

"Now he's got no job, no way to support his family," he said. "Whose interests are served by that?"

Though not suggesting any specific legislation, the bishop said he would like to meet and discuss immigration with Arkansas lawmakers as well as religious leaders from around the state.

"I think Arkansas will do well to learn from the Oklahoma experience and not repeat that," he said during his prepared remarks. "I would like to give our legislators and our people some language and the ability to understand the bigger picture of what human rights are."

"Of course our legislators are like the rest of us," he said. "So the place to begin is with ourselves, within our own hearts, and our own Catholic parishes, and our own discomfort in dealing with another culture and an immigrant group."

"To deal with our own fears that we may lose something somehow, say our identity or our control of the situation, and so we forget about the dignity and human rights of the other person," he said. "The defense of human rights is a necessary component of our Catholic faith."

The bishop asked Little Rock Scripture Study director Cackie Upchurch to write a three-week Advent Study Guide for parishioners to use while studying the pastoral letter. Advent begins Nov. 30, one week after the feast of Christ the King.

This feast "reminds us that we are one nation under God. We remember that Jesus said, 'Give to Caesar what belongs to Caesar, but give to God what belongs to God,' meaning that God's claims come first," he said. "Christ is king and in the Gospel that we will read on Christ the King Jesus says that our eternal destiny depends in part on the welcome we give or fail to give the alien in our midst."

The title of the letter comes from Matthew 25:31-46, the passage in which Jesus describes the importance of how people treat each other in determining whether they will go to heaven after death.

In the bishop's pastoral letter and accompanying study guide he addresses four basic principles: economic, moral, theological principle of common good; and spiritual. He discussed each of these during the press conference.

"Expelling 12 million people is not a realistic option historically, economically or socially," he said. "Our only real choice is whether to facilitate this process for the common good or to try to create as much misery as possible and reap the undesirable consequences."

"Most Americans do not realize the impossible barriers for those who want to enter our country legally," he said. "People don't want to be undocumented. They enter our country without papers because they have no other choice."

The bishop said he addressed the spiritual principle in the study guide. This principle is that "what we believe with our heads has got to then take route in our hearts for it to make any difference since that's where conversion occurs."

"What Jesus is challenging us to do here regarding immigration is to let him share his mind and his heart with us," he said. "Everything I have to say really boils down to Jesus calls for us to love as he loves without fear trusting in God's providence."

Welcoming the stranger, "as we have seen with earlier waves of immigrants, this process takes time, time for the immigrants to assimilate and time for the receiving population to become comfortable with the newcomers."

"You and I are being offered a unique and privileged opportunity to share the mind and heart of Jesus Christ in this important, and in some quarters, controversial matter," he said. "In this, God will use us to be not only a light to our nation enlightening others about human rights in the abstract, the way and truth and life, but more importantly, that we may be a source of love."