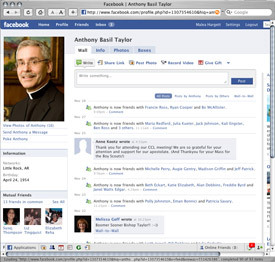 The days of Facebook only being for college and high school students are long gone. Bishop Anthony B. Taylor is believed to be the first American Catholic bishop to join the popular Web site. As of Dec. 2, he had 815 friends worldwide and counting.

Started in 2004, Facebook rivals MySpace as one of the largest social networking sites on the Internet. It is the fourth most-trafficked site in the world, according to comScore, an Internet research company.

Facebook reports more than 120 million registered users. Of these, the fastest-growing segment is people 25 and older. The site is free to users, but small advertisements are interspersed with the content. Only Facebook members can view the site.

Members can join networks based on cities, workplaces and campuses to find friends and co-workers in the system. Every member has a profile page where he or she can add work and personal information, as well as install applications that perform a wide range of functions. Members can view their friends' profile pages, send private messages, share photos and interact in a variety of ways. Based on their interests, members also can join groups and fan clubs.

Shortly after being ordained in June, Bishop Taylor said he was told a fan club had been created about him on Facebook. When he went online to look at the page, he realized he had to sign up to see it, so he did.

Not long after posting his information and a photo, the word spread fast and before long he had more friend requests and group invitations than he could keep up with.

According to the June 28 "Whispers in the Loggia," a popular blog written by Rocco Palmo, of The Tablet, an international Catholic weekly in London, "now, another E-Church barrier's fallen as the newly installed Bishop Tony Taylor of Little Rock's set up shop on Facebook."

Editor Jack Smith of the Catholic Key, newspaper for the Diocese of Kansas City-St. Joseph, Mo., posted to his Oct. 2 blog that a few bishops had begun to follow Bishop Taylor onto Facebook, while many others had a presence through fan clubs.

Stephen Elser, 17, a senior at Catholic High School in Little Rock, attended Bishop Taylor's ordination with his uncle Father Bill Elser of Benton. Afterwards, he was so enthusiastic and joyous about finally having a bishop, Elser went onto Facebook and found the "Bishop Taylor Fan Club." The administrators had abandoned the page so he took it over and invited all his friends to join.

Elser said his goal was to get Bishop Taylor to join Facebook, which he did shortly thereafter.

"It actually kind of surprised me, I mean I hoped he'd get one, but it was just surprising," Elser said. "I thank God he did because I like how he posts his homilies."

Bishop Taylor has been posting his homilies in English and Spanish to Facebook since July. On Nov. 7, after releasing his first pastoral letter, "I Was a Stranger and You Welcomed Me ..." he posted his summary outline with a link to the letter on the Diocese of Little Rock Web site.

Bishop Taylor said of his membership on Facebook, "I want to be available and accessible to everybody in the diocese." And "this is a way to be present to the younger people of the diocese."

Though unable to respond to the many messages he receives, he does accept all friend requests. Beyond the diocese's youth, he is friends with people of all ages worldwide who are laypeople, clergy and religious.

The bishop also gets numerous invitations on Facebook to attend high school youth and campus ministry events from around the state.

"I'm not able to go to hardly any of them, but I become aware of what's going on," he said.

Elser, who is considering the priesthood, said he thinks the bishop's presence on Facebook is a big deal for his age group.

"I think that allows him to get to know us and relate to us in a way that he couldn't do before," he said. "It could help foster vocations also."

"I want to be part of their lives," Bishop Taylor said. "Technology like anything has good points and weak points. But it can certainly be used to spread the Gospel and to build up the community."

Many parish and diocesan leaders seem to agree. Several of Arkansas' priests, religious, youth and campus ministry and religious education workers are also on Facebook for the same reason -- to evangelize.

"It's a tremendous tool of evangelization," said Father John Antony, pastor of St. Raphael Church in Springdale. "Like St. Paul used to write letters to the churches, we use notes on Facebook to reach people with the Gospel."

He also posts homilies to Facebook. He considers it a young adult ministry. Though he has very little time to spend on the site, his presence there is a way to reach the youth of his parish.

"There's this whole group of people from high school to college, to the 20-somethings, that there doesn't seem to be an obvious and easy way of communicating with the priest," he said. "I've talked to a bunch of young people now in the parish that I would have been totally out of touch with otherwise."

Shannon Stowe, pastoral administrator and director of religious education for St. Joseph Church in Tontitown, joined Facebook in 2006. She posts photos, video clips and links to other Web sites with positive messages that she said can "help launch a conversation about the faith."

"I'm a real big advocate of meeting the kids where they are," she said. "On Facebook, they automatically see everything, they stay in touch. I have kids who won't talk in class, but they'll contact me through Facebook. It's crazy, but if that means that I get to one more, then it's worth it."