Spouses are called to take up crosses, serve each other 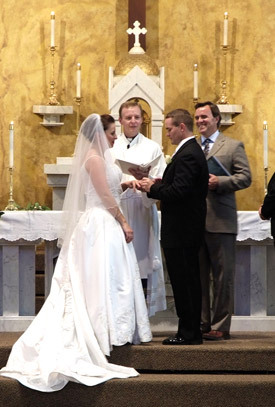 Todd Marchese
Mark Layton (right) places a ring on the finger of his wife, Stephanie, at their wedding, May 31 at St. John Church in Hot Springs. In declaring their mutual consent, the couple conferred the sacrament of marriage on each other.

Todd Marchese
Mark Layton (right) places a ring on the finger of his wife, Stephanie, at their wedding, May 31 at St. John Church in Hot Springs. In declaring their mutual consent, the couple conferred the sacrament of marriage on each other.

After 32 years of marriage, Laurel and Jane Becnel still remember how they felt at their wedding.

Jane Becnel, 53, said she remembers kneeling on the altar and praying to the Blessed Mother "because I was scared to death." She was happy because she knew Laurel was right for her, but "I was scared because knew it opened a whole new door for me."

"It was something bigger than the two of us," Laurel Becnel, 52, said. "I could feel that it was really the Holy Spirit present there."

The Becnels grew up and married in Louisiana but moved to Magnolia in 1991. They attend Immaculate Heart of Mary Church and have five grown children, ages 19-28.

Living out the sacrament of marriage has yielded many fruits for the couple.

Like all couples, the Becnels have experienced good and bad times.

"I really believe that having that marriage vow that the sacrament entails is everything that kept us together," Jane said.

Deacon Bo McAllister, chancellor of canonical affairs for the Diocese of Little Rock, said "marriage is a total self-giving to another for life."

He and his wife, Vicki, have been married for 41 years. They attend Christ the King Church in Little Rock.

When he prepares engaged couples for marriage, he said he tells them, "'You've got to be all-forgiving; all-loving and you've got to be affirming of your spouse. You can't hold something back and say this belongs to me and you can't have that.'"

That's not an easy thing to do.

Jesus himself gives spouses the ability to live out Christian marriage.

According to the Catechism of the Catholic Church, Christ dwells with spouses giving them the strength to take up their crosses and follow him. He empowers them to "rise again after they have fallen, to forgive one another, to bear one another's burdens, to 'be subject to one another out of reverence for Christ,' and to love one another with supernatural, tender and fruitful love." (no. 1642)

George Hoelzeman, 45, coordinates the Rite of Christian Initiation of Adults process at St. Mary Church in St. Vincent. He has been married for 16 years and has two children. Before marriage he attended St. Joseph Seminary in Covington, La., for four years.

Hoelzeman said the seminary taught him a lot about himself and what it means to have a spiritual life.

"That helped me be a better husband and father. I could not be the person I am without that seminary experience," he said.

Hoelzeman said the Church's theology describes marriage as the principal vocation of a Christian.

"The whole of Scripture uses marriage to represent how God loves us and that our mission in the world is to reveal Christ," he said. "That's the vocation of a married couple - to reveal that God loves us to such a degree that the two become one. The ultimate union of man and woman is a child. The ultimate union of Christ and his Church, of God and humanity, is also a child, Christ. So if you really think about it, marriage is a vocation that reveals salvation."

Unlike other sacraments, which are administered by a bishop, priest or deacon, during the rite of marriage, spouses confer the sacrament on each other when they declare their mutual consent to live together as husband and wife. The clergy member present at the ceremony serves as the official witness and receives the vows of the couple on behalf of the Church, McAllister said.

In order for this sacrament to occur, spouses must be a baptized man and woman, who are free to marry without constraint or impeded by any natural or Church law. (catechism, no. 1625)

In the rite, spouses give a public expression of consent committing to fidelity, indissolubility and openness to children, McAllister said.

Mark and Stephanie Layton were married May 31 at St. John Church in Hot Springs. Mark is Catholic but his wife is not, but that didn't prevent her from treasuring the sacrament they share.

"I thought it was extremely special that God was actually molding your hearts together," Stephanie, 30, said.

Even though he was confident before marriage that his relationship would last, Mark, 32, said when he got married, he knew it was forever.

"It was just different now that I had a ring on my hand and we had just gone through that ceremony," he said. "I knew we were married and it was 'til death do us part."

Matrimony at a glance