Grace of sacrament empowers priests to minister beyond abilities 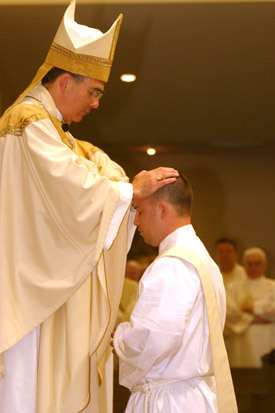 Msgr. Scott Friend said before he was ordained he feared he didn't have what it takes to be a good priest.

God's grace "makes you realize, humbly, your poverty, you also realize your unworthiness for that sacrament; you realize you don't have the capacity to fulfill it," he said.

"When you get ordained then, all the sudden you realize, 'Gosh, I'm able to do that,'" he said. "'I'm able to find good counsel, where did that come from?'"

"Time and again you see how the grace of the office that you have as a priest allows you to go beyond your own capacity," he said.

Msgr. Friend, 47, diocesan vocations director, said he sees how God empowers his priesthood through his brother priests in the Diocese of Little Rock.

Though few in number, he said he is amazed at all the priests have to do and yet they are "always willing to do more if that's what it takes."

These abilities come from Jesus Christ himself.

"Jesus is the high priest," Msgr. Friend said. "His priesthood is made visible and real to us through the person of the priest."

That's what a priest does, "he makes accessible, Christ's priesthood to the faithful," he said. "It was Christ who chose his Apostles and gave them a share in his ministry and then his authority."

According to the Catechism of the Catholic Church, "this is what the Church means by saying that the priest, by virtue of the sacrament of holy orders, acts in persona Christi Capitis." (no. 1548)

Like baptism and confirmation, holy orders leaves an "indelible mark" on a person's soul.

"What priesthood does is it causes an ontological change," Msgr. Friend said. "The person's soul, the essence of their being, is actually structurally changed."

Serving in the person of Christ does not mean the priest is immune to human weakness and sin. Yet this "cannot impede the fruit of grace" received from God through sacraments administered by a member of the clergy. (catechism, no. 1550)

Father Norbert Rappold, 46, pastor of St. Agnes Church in Mena and its missions in Mount Ida and Glenwood, said when he was ordained in 1999 he thought he was supposed to be perfect and able to "fix everything."

Over time he discovered he was "not the fixer" but rather a servant called "to serve where God already is."

Father Rappold, a recovering alcoholic, said a turning point for him was when he was "laid low and made to realize I'm not superman. ... That I'm still very much human inside."

For him serving in the person of Christ means "to be the least and not the most important." It means "embracing Calvary with joy" and not seeing it "as something to fear, but something very much in the will of the Father."

Holy orders confers the spiritual power and grace to carry out the ordained ministry of the Church. Within the sacrament, there are three orders: the diaconate (deacons), the priesthood and episcopate (bishops).

During the rite of ordination, holy orders is conferred when the bishop lays his hands on the head of the candidate while praying the consecratory prayer which asks the Holy Spirit to provide the gifts necessary to accomplish the ministry to which the candidate is being ordained. (catechism, no. 1573)

Father Matt Garrison, 32, pastor of St. Mary Church in Paragould and its mission in Corning, said when he was ordained nearly five years ago he felt "a flood of peace" while at the same time "such a rush."

"It's something people can't really understand until they're prostrated on the floor literally giving their life to Christ," he said.

Four months after his ordination, he said it really hit him while he was celebrating Mass. During the Eucharistic Prayer he realized, "I have been ordained to bring the Body and Blood of Christ to God's people."

It is an awareness that continues to amaze him. "It just can't be matched," he said. "Every time I celebrate the Liturgy of the Eucharist, it really grabs me; it wakes me up."

Holy orders at a glance