Confession restores our relationship with God

Reconciliation heals both the private and public nature of sins 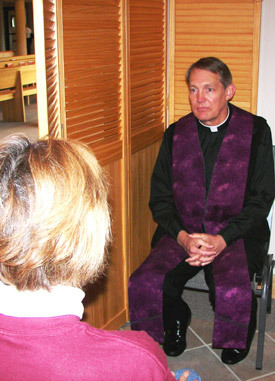 Dave Turner
In this demonstration at St. Vincent de Paul Church in Rogers, Oct. 23, Msgr. David LeSieur shows how a priest serves in the person of Christ during the sacrament of reconciliation.

Dave Turner
In this demonstration at St. Vincent de Paul Church in Rogers, Oct. 23, Msgr. David LeSieur shows how a priest serves in the person of Christ during the sacrament of reconciliation.

On a trip to Lourdes, France, 15 years ago, Deacon John Pate discovered the true meaning of reconciliation. He and his wife, Sandra, who were both new to the Catholic Church, signed up for a tour led by Bishop Andrew J. McDonald to Paris, Lourdes and Rome.

"We jumped at the opportunity. I was a new convert and Sandra had come into the Church three years earlier," he said.

They entered through the Rite of Christian Initiation of Adults process at Christ the King Church in Little Rock.

Although Pate had never heard of Lourdes, he was astonished to see the number of people visiting the Marian shrine.

"People from all over the world were coming to this place," he said.

There at the shrine was a spring of water that ran through two bathhouses where long lines of people gathered to bathe in the healing waters.

"It was just a blessed time to step down into the icy cold spring water to be immersed. I wanted my body, my mind and my soul healed," he said.

At this moment, Pate reflected on his first confession six months earlier. In his RCIA class there were 54 candidates who gathered to go to confession before Easter.

"Looking back, I cared more about what the priest thought about me than what the Holy Spirit thought of me. As a 50-year-old man with 50 years of sins, I couldn't do this in two minutes so I spoke in generalities," Pate recalled.

In Lourdes, he "decided to tell it like it was" while going to confession there.

Pate spent almost 45 minutes in confession with an elderly priest.

"I just started back as far as I could remember. I told him the whole exhaustive story. I just wanted to get that dealt with properly. I had been immersed in the healing waters of Lourdes and I wanted to be clean all over inside and out," he said. "It was a wonderful feeling to walk away from that place and feel renewed, refreshed and forgiven."

Today the deacon at St Vincent de Paul Church in Rogers shares this story with other RCIA candidates as they prepare for their first confessions.

He tells them, "In this sacrament one receives the grace of God which is unmerited favor -- blessings that come to you for having received the sacrament of reconciliation."

Yet many Catholics fail to take advantage of these graces.

According to a 2008 report by the Center for Applied Research on the Apostolate (CARA) at Georgetown University, 45 percent of Catholics never receive the sacrament of reconciliation.

U.S. Catholics in the South and Midwest are more likely to go to confession at least once a year than those in the Northeast or West.

Though the sacrament offers those who receive it a new beginning, coming forward to receive it can be very hard.

"It has a lot to do with facing who we are," Msgr. Jack Harris said. "I think more than anything else it is the owning who I am; what have I done; opening myself to however God would like to act in my life with his grace."

"Confession: Its Fruitful Practice" explains that the five elements of the sacrament of reconciliation are examination of conscience, contrition, confession to a priest, absolution by the priest, and satisfaction through penance. (Chapter two, pages 4-46.)

One element of the sacrament "deals with the social nature of sin" because, Msgr. Harris said, there is no such thing as a sin that is just between "me and God."

"Even if no one else is around when I did what I did, it still makes me less of a person," he said. "It lowers my spirituality to the point that it impacts everyone around me. It has the old ripple effect. You have no idea how many people got touched by that sin. In confession, the priest stands for the rest of the people in the community."

Reconciliation at a Glance

Click here to return to the 2008 Sacraments section index.