Anointing of the sick helps us deal with illness 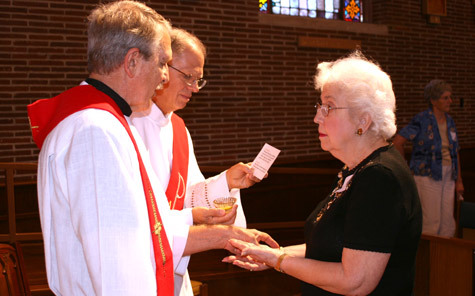 Malea Hargett
Father John Oswald administers the sacrament of the anointing of the sick at the Seniors' Day Mass in the Morris Hall Chapel on the campus of St. John Center in Little Rock Sept. 14.

Malea Hargett
Father John Oswald administers the sacrament of the anointing of the sick at the Seniors' Day Mass in the Morris Hall Chapel on the campus of St. John Center in Little Rock Sept. 14.

Alice Manning, a new member of St. Stephen Church in Bentonville, had joined a Scripture study group and was a recent widow after she moved to northwest Arkansas to be close to her son.

"Two years ago, my husband had prostate cancer and passed away. It takes a lot of prayer to come to grips with it," she said. "You go through all those things -- the frustration, the grief process. I managed it through a lot of prayer. It just brings you closer when God is all you have. You find that that is all you need."

In the midst of this life-changing event, Manning, faced another crisis when she was diagnosed with breast cancer in May. She was scheduled for surgery when she discovered the depth of friendship offered to her by her Scripture study group.

"I was at Mass one Thursday morning before I had my surgery. Some of the ladies from my group wanted to know if I would be interested in receiving the sacrament of the anointing of the sick," she said. "That day Father Mike (Sinkler) administered it while the women in my study group gathered around me for prayer. They were all there. We held hands and prayed together."

Her reaction to receiving this sacrament was one of peace and comfort.

"It is hard to describe this feeling of spirituality. But it is like you know that no matter what happens -- whether you are cured or how much pain you might have -- it is just a spiritual feeling of closeness that you will be OK," she said. "After that I wasn't afraid to go into the operating room; I felt like the Holy Spirit was with me."

A retired nurse, Manning continues her battle with cancer as she prepares for another surgery this month.

"I am not worried about that either," she said. "I know I will be OK."

"If someone is stressed about their spiritual status, I want to know more about them. I want them to tell me their story," he said.

"I will ask the patient if he/she would like to receive the sacrament of the sick. I may do a brief explanation to say that in this sacrament we want to show you that God is present to you," he said.

Father Sinkler said the rite begins with the opening prayer from the Letter of James.

"The priest lays his hand on the person's head in silence followed by a prayer of anointing on the forehead and palm of the hand. Those two places signify our five senses that we can feel our Lord's presence in a tangible way," he said.

Then he concludes the rite with the Our Father and a silent prayer.

Father Sinkler said people are aware that it is more difficult now to have a priest available to pray with them and celebrate this sacrament.

"They will ask for it on Sunday, before or after Mass and I will take them to our chapel and pray with them," he said. "I have also administered it in my office -- wherever it needs to be.

"This sacrament is a reminder that God is with us in the weakness of our lives. Its effect is a deeper awareness of God's presence that translates to emotional and sometimes even physical healing," he said.

As chaplain, Father Sinkler finds that it is a great privilege to walk with people in a time of weakness.

"It is well said that sickness and death is a participation in the passion of Christ and the sacraments in our faith life are about finding hope. That is really what moves us and gives us strength. It gives us something to move toward in dark times," he said.

Anointing of the sick at a glance