Eucharist unites us with Jesus in intimate way

Eucharist is the 'source and summit' of the Christian faith 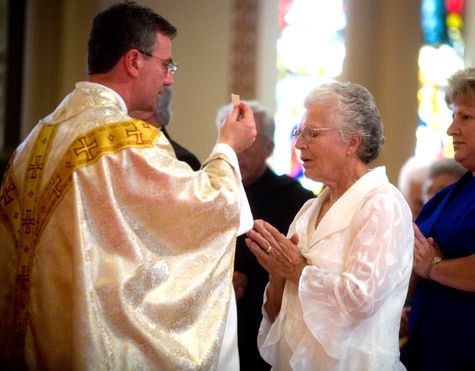 Bob Ocken
Father T.J. Hart gives Communion to his mother, Patricia Hart of Center Ridge during his ordination at the Cathedral of St. Andrew in Little Rock June 30, 2007.

Bob Ocken
Father T.J. Hart gives Communion to his mother, Patricia Hart of Center Ridge during his ordination at the Cathedral of St. Andrew in Little Rock June 30, 2007.

When Catholics receive the Eucharist, they receive, under the consecrated species of bread and wine, the Body, Blood, Soul and Divinity of Jesus.

According to the Catechism of the Catholic Church, receiving the Eucharist increases a communicant's union with the Lord, forgives venial sins, and preserves him from grave sin. It also reinforces the unity of the Church as the mystical Body of Christ. (nos. 1414, 1416)

Pat Moss, a high school parish religious education teacher at Mary Mother of God Church in Harrison, has seen the power of the Eucharist work within his own life and has shared that knowledge with his students.

"I was raised as a Baptist," he said, "but attended Mass with my wife, Nancy, regularly. One day I heard a homily in which a Vietnamese priest said, 'Many of you only sip the water of life, but you have plenty of Miller Lite.' His words locked me into the Eucharist."

During his Rite of Christian Initiation of Adults sessions, Moss said he saw how belief in the Eucharist was rooted in the Scriptures he had studied from childhood, and began to desire baptism and Eucharist for himself.

"I couldn't explain why except for my fervent belief that this was truly the Body and Blood of Christ in every way," he said.

Moss was baptized, confirmed and received his first Eucharist in Atlanta, Ga., at the Easter Vigil Mass in 1996.

Jesus Christ himself instituted the sacrament of the Eucharist at the Last Supper where he gave his Body and Blood to his Apostles. He did this, "to perpetuate the sacrifice of the cross throughout the ages until he should come again." (catechism, no. 1323)

Therefore, it is Jesus, "the eternal high priest of the New Covenant" who acts through his priesthood to offer the eucharistic sacrifice. (no. 1410)

The Eucharist completes Christian initiation. The word, "Eucharist" comes from the Greek eucharistein and eulogein, which "recall the Jewish blessings that proclaim -- especially during a meal -- God's works: creation, redemption and sanctification." (no. 1328)

This sacrament is called "the heart and the summit of the Church's life" because it is the "memorial of Christ's Passover, that is, of the work of salvation accomplished by the life, death and resurrection of Christ. (nos. 1407, 1409)

Rita and Mike Ferguson, parishioners at Sacred Heart of Mary Church in Barling, have been visiting the perpetual adoration chapel in St. Boniface Church in Fort Smith, ever since it opened in 1999.

"We've gone as a couple to adoration every Saturday morning from 8 to 9 a.m. for the past nine years," Rita Ferguson said.

In 1998, one year before they started attending weekly adoration, Mike Ferguson, a devout Baptist for most of his life, converted to Catholicism. The Fergusons became active in a charismatic prayer group and provided music for the annual diocesan charismatic conferences. Their joint decision to commit to weekly adoration has given them a greater appreciation and love for the Eucharist.

"During our nine years of adoration, Mike and I have had the time to read the entire Bible from beginning to end," Ferguson said. "And when you sit in the chapel and read it for yourself it's a lot different from hearing it read at church. The readings on the Eucharist are so much more meaningful when you read them yourself instead of listening in Church with all the distractions."

The Word brought them to love the Eucharist. Both teach PRE at Sacred Heart of Mary, and, over the years, they have led Bible study and "Why Catholic?" groups, music ministry and gone on mission trips.

The Fergusons' son, Josh, is getting ready to complete his second tour of duty with the Army National Guard in Iraq, but in good times and in bad, the Fergusons will continue to pray.

"It gives you a time to get away from the world and be closer in communion with the Blessed Sacrament," Ferguson said.

What the Fergusons have experienced is explained in the catechism.

"Participation in the Holy Sacrifice identifies us with his (Jesus') heart, sustains our strength along the pilgrimage of this life, makes us long for eternal life, and unites us even now to the Church in heaven, the Blessed Virgin Mary, and all the saints." (no. 1419)

Moss said he too has received this strength in everyday life.

"When I receive Communion, I am more able to resist temptation. After Mass, I am able to be more patient with my four children. The little things they do don't bother me," Moss said. "By Thursday, I start getting spiritually worn out and can't wait to start over on Sunday. The effect of the Eucharist, for me, is that I can handle things a lot better during the week."

Eucharist at a glance