In baptism, Jesus brands our souls as belonging only to him

Indelible mark is permanent and cannot be removed or repeated 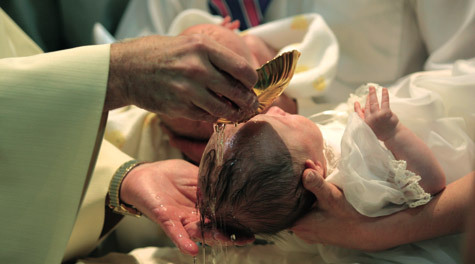 Victor Lee, a parishioner of St. Joseph Church in Fayetteville, had attended Mass with his wife, Sharon, for many years before making the decision to become Catholic.

"I came to the point where I wanted a closer relationship with God. I wanted more from the Church and I felt that in order to get more I needed to become a Catholic and understand more about the Church and become a better person," he said.

During his Rite of Christian Initiation of Adults sessions he learned more about the sacraments, particularly the Eucharist, and apostolic succession -- all things he had heard while attending Mass but had not had the opportunity to explore in depth.

Lee grew up attending various Christian churches and was baptized as a child, but was unable to find his baptismal record so he was conditionally baptized at St. Joseph during the Easter Vigil Mass March 22. He was then confirmed and received the Eucharist to complete his initiation into the Church.

Although the norm in the Latin rite is for infants to be baptized and then confirmed several years after receiving the Eucharist for the first time, in the early Church catechumens were baptized and confirmed first, then, having been cleansed of sin and having received the Holy Spirit, received the Eucharist. This then is the order in which RCIA candidates receive the three sacraments. (Catechism of the Catholic Church, no. 1229)

At the Easter Vigil candidates to be baptized are marked with the sign of the cross and given the opportunity to respond to the proclaimed Word of God with an act of faith. They are baptized with water, anointed with sacred chrism and given a baptismal garment, signifying that they have "put on Christ." (RCIA, no. 229)

"My whole family was at the Easter Vigil with me," Lee said. "It was a very moving, emotional experience. I felt an overflowing of grace that was very fulfilling. Being able to participate in the Eucharist was something I'd been looking forward to for a long time."

Sharon Lee said some of their friends in interfaith marriages have been inspired by her husband's story.

"I would highly encourage them to get into RCIA whether they have any desire to become Catholic or not," he said, "just so they could understand it better. I would be very surprised if they didn't become Catholic. I went back to RCIA this year and on welcome night I told the class I was sorry I hadn't done it years ago."

Baptism is the sacrament through which "salvation is given to us," said Deacon John Marschewski, diocesan minister to deacons. "We enter into God's gift of eternal life. It is the beginning of our journey."

The catechism explains that baptism is "called gift because it is conferred on those who bring nothing of their own." (no. 1216)

"To baptize, (Greek baptizein) means to 'plunge' or 'immerse'; the 'plunge' into the water symbolizes the catechumen's burial into Christ's death, from which he rises up by resurrection with him, as 'a new creature.'" Without baptism, no one "can enter the kingdom of God." (no. 1214-15)

Received only once, baptism leaves an "indelible spiritual mark" indicating the new Christian now "belongs to Christ." And nothing or no one can erase this mark, "even if sin prevents baptism from bearing the fruits of salvation." (no. 1272)

In recent years Marschewski, who is also one of seven deacons for Christ the King Church in Little Rock, served on a committee to update the diocese's baptism preparation policy.

"Just as RCIA candidates are received into the Church at the Easter Vigil, ideally infants should be baptized during Mass," he said.

"After Vatican II, there was a clearer understanding of the role of parents, godparents and the community in baptism, and the baby's new life in the Church," he said. "We have a stronger sense of the additional support the sacraments have in contributing to the growth and journey of that child."

Baptism at a glance