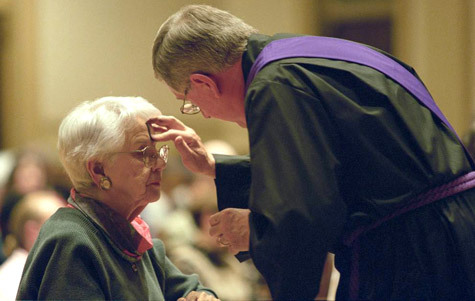 Beginning Ash Wednesday, Catholics enter the 40-day penitential season of Lent, but they are not the only Christians to do so. In fact, a growing number of Christian denominations are incorporating Lenten observances into their Christian experience.

"In some denominations we are reclaiming a sense of history," Dr. Jane Harris, professor of American religion at Hendrix College in Conway, said. "We can still be Protestant yet claim liturgical practices."

Harris gave two reasons to explain why more churches, including some American Baptist churches, although none in Arkansas, now follow a liturgical calendar and observe Lent.

First, she said, many churches want to recognize the rich history of the liturgical calendar.

"Observing church seasons add elements of depth and life to the congregation to spiritually enrich us," she said.

Secondly, society has diminished the spiritual elements of holidays.

"Advent and Lent slow us down and take us away from the commercialism and allow us to prepare for the high holy days of Christmas and Easter," she said.

In fact, Lent is all about preparation. While the word "Lent" means "spring," the season of Lent for many Christians is marked by a concentrated focus on prayer and a sacrifice either by giving something up or taking something on, Harris said.

"During Lent, we know that for 40 days everything is going to be different," Father Nicholas Verdaris, pastor of Annunciation Greek Orthodox Church in Little Rock said. "It is about altering our way of life to allow more time for prayer."

Father Verdaris said there are special services only done during Lent and include prayer along with communion and act to fortify the spirits of the faithful.

Followers of the Orthodox Church do not eat meat and sometimes extend that prohibition to dairy for the entire 40 days of Lent, Father Verdaris said.

He also said no weddings are performed during Lent and except for funerals, no other sacraments are celebrated.

"We begin at 11 p.m. on Holy Saturday with candles and fill the church with light and praises of the resurrection and are up pretty late, similar to midnight Mass," he said.

In other denominations, like Episcopal, Presbyterian and Methodist, the season of Lent begins on Ash Wednesday and concludes with Holy Week. The members of these churches are encouraged to enter a prayerful period and either give something up or take something on during Lent.

"We are called to be mindful of our sins," Bishop Larry Benfield of the Episcopal Diocese of Arkansas said. "The Book of Common Prayer says Lent is a time for self examination, prayer, fasting and self-denial. We should be reading and mediating on God's holy word."

In the Episcopal Church, Bishop Benfield said, the season is marked by penitence and fasting and is an appropriate time to prepare for baptism and many come into the church on Easter.

He said some people give up a cherished food item, television show or other "must-have" while others answer God's call to increase their prayer time, teach a Bible study or take on a ministry of another kind.

For members of the United Methodist Church, the Rev. Roy Smith, assistant to the bishop, said there is a real recognition of Lent and many churches have services for Ash Wednesday and mark Palm Sunday through a procession of palms.

Almost all United Methodist churches use a liturgical calendar, Rev. Smith said. Depending on the size of the church or area -- rural versus urban -- churches may have special Bible studies or revivals focusing on spiritual awareness during Lent. Holy Week services are common and are often ecumenical. Holy Saturday services, although not common, have been held in larger churches for the rite of baptism, Rev. Smith said.

Fasting, however, is not a widespread practice in the Methodist church during Lent although it is part of the history of the church, he added.

He said each church is different in how its membership carries out Lenten practices. His church offers weekly ecumenical soup lunches and prayer services during the noon hour.

Calls to Lutheran representatives were not returned by press deadline.