After tornado in Mena on Holy Thursday, parishioners find hope

In spite of storm, Holy Week services go on as scheduled 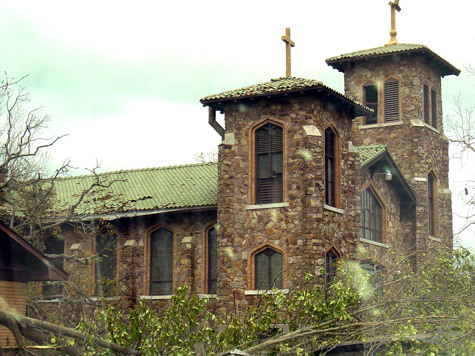 A metal cross on top of the bell tower (upper right) is twisted and some of the roof and other damage is visible at St. Agnes Church in Mena after a tornado April 9. The 80 people attending the Holy Thursday Mass that moved to the church basement were not injured, although several lost their homes.

A metal cross on top of the bell tower (upper right) is twisted and some of the roof and other damage is visible at St. Agnes Church in Mena after a tornado April 9. The 80 people attending the Holy Thursday Mass that moved to the church basement were not injured, although several lost their homes.

Deacon Larry Hatch was giving his homily April 9 at Holy Thursday Mass when the first tornado siren went off in Mena around 7:20 p.m. The parishioners in St. Agnes Church were anxious but stayed calm even when the second siren sounded during the washing of the feet.

Just before pastor Father Norbert Rappold began the Eucharistic Prayer, a parishioner ran back into the church and yelled, "Everybody get down; get down now. It's coming and it's a big one."

Everyone hurried down into the church's basement. A make-shift altar was set up on a card table and the Mass continued by flashlight because the electricity had gone out.

Just before saying the prayers of consecration, Father Rappold said several things happened in a matter of seconds. He heard a sound like a freight train, his ears popped from the dramatic change in air pressure and the window at the west end of the basement blew in. Everyone ducked as a second window on the south side blew in, knocking some to the ground with the force of the wind.

"It blew out the basement windows and scattered everybody and peppered us with broken glass and twigs, grass and other debris," Hatch said.

People were screaming and then the tornado was over. It all happened in about 10 seconds.

Despite the danger, Hatch said parishioners only received minor cuts and scratches. "Nobody was even bleeding. It was really, really minor, and we must have had 80 people down there."

Unsure if the storm was over and comforted knowing the basement was the safest place to be, Father Rappold decided to finish the Mass.

"We all stayed down in the basement until we got the all clear," Hatch said.

Some stayed to pray before the Blessed Sacrament in the basement after Mass, but others ventured out to see the damage.

What they discovered was shocking. The severe tornado was an EF3, which carries a wind speed of up to 165 mph.

The Arkansas Department of Emergency Management said three people died and several others were injured in the tornado, while hundreds of homes and businesses were damaged or destroyed. As of April 10, the ADEM reported that 11 counties were damaged in storms on Holy Thursday.

Mena was hardest hit. The small Ouachita Mountain town of 5,600 people is near the Oklahoma state line.

When Hatch emerged from the church, he said the sky was dark and he couldn't see anything. He nearly tripped over roof tiles scattered on the stairs. Hatch and his wife, Sally, live a half-block from the church. They led some parishioners by foot to their home, a walk that took 20 minutes to navigate in total darkness while carefully avoiding debris and live wires.

Father Rappold opened the rectory for some unable to get home that night.

Other parishioners discovered damaged or destroyed cars in the parking lot. Even those that could drive couldn't get far because downed trees and power lines blocked the streets.

Parishioners Gary and Renita Thomas left the church and found their back windshield blown in, but the car was drivable. With the streets blocked, they drove across yards until they could go no farther by car about a half-mile from their home.

"We had to climb over downed power lines and through trees and we finally got home," Gary Thomas said. "We walked completely by the house and didn't even recognize it."

The retirement home they bought three years ago when they moved from Kansas City, Kan., was a total loss. Devastated and shocked, the couple collapsed on the ground.

Despite their loss, they called Father Rappold on Good Friday by cell phone and asked if the church would continue with Holy Week services, which was particularly important to them because Renita was set to join the Catholic Church at the Easter Vigil. Only a week before they learned her two-year wait had ended with the granting of her annulments from two previous marriages. This also meant the couple's marriage could be convalidated.

Thomas said he asked Father Rappold what was going to happen and he responded, "'Well, you guys are going to get married.'"

The next day, the pastor said he got permission from Bishop Anthony B. Taylor to move the Easter Vigil Mass to 5 p.m. because of the dusk-to-daylight curfew in Mena. Still without electricity, generators were used to power the furnace.

Father Rappold said people came in their work clothes; he wore overalls under his vestments, ending his workday only 30 minutes before Mass.

During the Easter Vigil he baptized nine and confirmed 17 others, including Renita Thomas.

Unable to speak to Arkansas Catholic, her husband, Gary, explained what it meant to them.

"We took Communion together for the first time as a couple. It was wonderful ... it was wonderful, it really was," he said tearfully.

On Easter Sunday Bishop Taylor celebrated the 9 a.m. Mass at St. Agnes Church, while more than 2 inches of rain fell outside. Father Rappold said he thought the bishop's presence meant a lot to his parishioners.

"He was dead on with his message of fear, and the hope that comes in the midst of that," he said referring to the bishop's homily. (Click here to read the homily.)

On April 13, the bishop shared his experience in Mena with Arkansas Catholic by phone.

"When I arrived that morning, there were six men on the roof trying to put a tarp down on the roof of the rectory; it was raining," he said. "Father Norbert was on the roof himself. He had been working the two previous days too."

Bishop Taylor said he told parishioners during the Mass that they had the "spiritual resources to draw on to move forward" and that this was a time "to reach out to those who are suffering to bring them hope to move forward."

"God's present among us and he'll use this as an opportunity for us to grow in our faith to put our trust in him and to pull together," he added.

Father Rappold said at least one-third of the 250 families in his parish suffered damages from the tornado. As of April 13, he knew of 10 to 15 families who lost their homes.

Despite their suffering, the priest said he could sense a change in his parishioners at the Easter Vigil, hope somehow broke through.

Parishioners from Our Lady of Guadalupe in Glenwood came over the weekend to help make temporary roof repairs to the church, rectory and parish hall. Building supplies were provided by parishioners at All Saints in Mount Ida and parishioners from St. Jude Church in Waldron came to help April 13.

The rectory was damaged the most when a large pecan tree fell onto the carport and another fell over a bedroom poking a small hole in the roof.

Yet, a wooden cross standing in front of the church still had a purple cloth and crown of thorns hanging on it for Lent.

"The main brunt of the storm was just a block south of the church," Hatch said. "All the way through town, there's a swath of completely destroyed homes."

The Disaster Response Office of Catholic Charities of Arkansas organized a One Day Disaster Assistance Center April 14 in St. Agnes' parish hall. Many interfaith organizations joined Catholic Charities to help, including Baptist Cooperative, United Methodist Committee on Relief, Adventist Relief, the Salvation Army as well as AMERICORPS, Arkansas Rice Depot and the American Red Cross. About 250 people were assisted at the event.

Sally Hatch, social action chairwoman, coordinated the event on the parish level. She said a group of volunteers from the parish would eventually be trained as a parish disaster response team through the Disaster Response Office.

Find out how you can help

To find out how to donate time, materials or money to help recovery in Mena, visit the Web page for Catholic Charities of Arkansas' Disaster Response Office at http://www.dolr.org/offices/catholiccharities/disasterresponse_donatenow.php