Every child can succeed at track, coach says 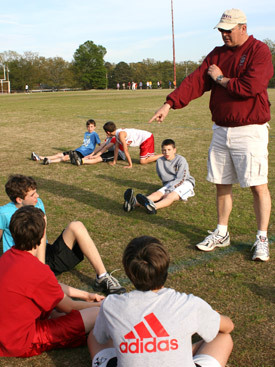 For students who might not be able to find their niche on the basketball or football team or on the cheerleading squad, cross country and track and field are good options, Clem Papineau said.

Papineau, Central Arkansas Parochial League track director, said he has seen over the past fours years that running and field events have strengthened students who are already athletes, but it has also brought in junior high students who aren't participating in any extra-curricular events or sports.

"I love football and basketball and now soccer," he said. "Those are sports where you have a limited number of participants on the field. ... I see kids sit the bench all the time. Track is an individual sport and then putting together (scores as) a team sport. That is the biggest benefit, I can take a kid that is shy or shunned at school and I can make him a runner and I can give him success on the track field.

Ann Morris, athletic director at Christ the King School in Little Rock as well as for the Parochial League, agrees.

"Any child can do it," she said. "We are getting kids who don't play basketball or don't play football. Any child can run. We are trying to find a spot for every child. We want every child to participate in an activity of some form. This is where they can say I can be part of the athletic program."

The Parochial League serves fifth to eighth graders in Catholic schools in Little Rock, North Little Rock, Benton and Hot Springs as well as Christ Lutheran School and Anthony School. Year round, schools compete in a variety of sports, including football, basketball, golf and volleyball. The league offers an opportunity for the junior high schools to compete because they are not members of the Arkansas Activities Association and thus can't play against public schools.

Students are allowed to compete if they maintain a C average with no Fs in grades and a B average in conduct. If a student falls below, they can continue to practice but can't compete until the improved interim reports are handed out.

The outdoor track program was started by a Christ Lutheran School coach who wanted to help prepare his students for high school track. Papineau, who ran track in high school and has coached several football and basketball teams, was asked to be the assistant director. Two years ago Papineau took over the program. Papineau also doubles as the coach for Christ the King School, leading 90-minute practices four times a week.

Today the cross country program serves about 100 students in the fall. The track and field program, with 15 events, meets in the spring with about 250 students.

Starting in August, cross country runners begin running two miles. They compete in five meets around Little Rock and North Little Rock on a variety of courses. The program ends in October. Boys and girls compete separately for the top spots.

Starting in March, many of the cross country runners will continue on with track and field. The students will practice with their school teams throughout the week and then come together at the Little Rock School District's Scott Field for five Wednesday night meets. Each student can compete in two to six events. The bigger schools and smaller schools do not compete in order to be fairer, Papineau said.

The field events include shot put, long jump, high jump, triple jump and discus. Pole vaulting is not offered because of the level of difficulty and risk, Papineau said.

Noah Findlay, an eighth-grader at Our Lady of the Holy Souls School, is a stand-out in the league for the mile, 100 and 400. He runs six times a week, practicing with his team and on his own, sometimes running up to eight miles.

"It's pretty intense, but you get used to it," he said.

Papineau said Findlay is sure to strengthen the Catholic High team in the fall. Findlay said he is confident he has the talent to contribute.

Papineau, who has an eighth-grader, Hunter, on the team, said he believes that offering the cross country and track and field program makes the Catholic schools more competitive with public schools and other private schools.

"We think they are getting a better education than public schools," he said. "The Christian part of it is extremely important. With the Parochial League, especially with all parents looking at the overall picture how my young son or daughter is going to fit in, if we offer competitive sports and band and art, if we have them at the same level as the public schools, I can't see how anyone can make a decision not to send their kids to Catholic schools."

Papineau takes his volunteer position very seriously. He sends daily e-mail messages to the Christ the King parents, giving them feedback and letting them know about coming events. Papineau recently earned his certification from the USA Track & Field, the national governing body, in order for him to serve as an official at any track event through the college level.

When the track program was becoming too costly, Papineau secured a $9,000 grant from Alltel to pay for the track rental fee and buy awards and computer equipment for the field events.

"He does an excellent job organizing the entire league," Morris said. "He's got over 40 kids on the (Christ the King) team, plus seven other schools that have 10 to 50 kids. It's not like he's a coach with 10 kids on the team."

Even though Papineau's youngest son will be moving on to high school in the fall, he said he will continue to coordinate the junior high program.

"The kids are just awesome," he said. "You want to see it through with them ... Those kids keep you running."