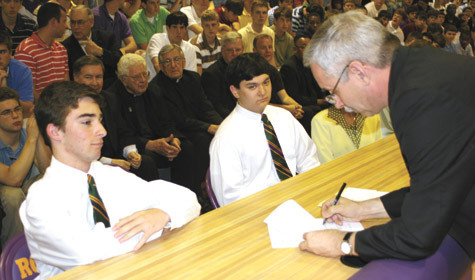 The signing of letters of intent continued May 9 during the diocesan-wide Catholic Youth Ministry convention when Brad Charbonneau from St. Jude Parish in Jacksonville signed a letter.

The special signing ceremonies were a first for the diocesan Office of Vocations and Seminarians.

The diocese expects to sign seven more seminarians before classes begin in the fall. Currently, the diocese has 27 seminarians, representing a 44-percent increase in the past four years.

Following the signings, the student body erupted in cheers and gave them a standing ovation. Father Bill Elser, pastor of Our Lady of Fatima Church in Benton and uncle of Stephen Elser, and Msgr. Malone presented the new seminarians with diocesan shirts and University of Dallas baseball caps.

De Orbegozo and Elser said they were appreciative of the support from their classmates.

"I think it was excellent, I really enjoyed the support they have given us," de Orbegozo said. "I especially appreciate the fact that, because of what the bishop said, they will consider a vocation."

"Just seeing all these people here is really amazing," Elser said. "I did not expect this huge crowd. I did not realize this many people were that supportive of me."

Both said the decision was one they had prayed about a long time.

Ashburn said that in the fall there will be six CHS alumni in the seminary. This is the highest number in more than 20 years.

"I have known them for quite a long time, both at the parish, at Christ the King when they were younger and then as teacher, assistant principal and an old friend," Ashburn said. "It does not surprise me at all, they were talking about this when they were sophomores."

Ashburn said he has taken the two to visit a number of seminaries, including the one they will attend.

"We are proud of them and want to keep them in our prayers," Ashburn said.

The signing ceremony was held so classmates could show their support, but at the same time show the uniqueness of Catholic schools and the diocesan high school in particular, Msgr. Friend said.

Every ingredient used to make the bricks and mortar for the school was donated by somebody because of their faith in Christ, Msgr. Friend told the students. Students attend not only to succeed academically but to be able to listen to what God is calling them to do, he said.

Msgr. Friend told their classmates that Elser and de Orbegozo still have a long road of discernment ahead and asked the classmates to continue to pray for the two.

"We are a church, a community of faith and we are here today to support Joseph and Steven in their vocations," he said.

This was not a spur of the moment decision for Elser and de Orbegozo, Bishop Taylor said. It has been a long-term process and this response is one more step in the process of discernment.

Bishop Taylor thanked the parents of the two seniors for supporting the young men and for their faith.

Liz Tingquist, diocesan youth director, said Elser and de Orbegozo are members of the parish's youth band, Team Jesus, and serve on the parish youth advisory council. Both have served on Search teams. Elser is also a member of the school's Schola. De Orbegozo is the president of the school's Theology Club.

"The interior of their hearts was very visible for four years," Catholic High principal Steve Straessle said. "It is not surprising in the least because of the way they have held themselves, conducted themselves and their spiritual life have all been so evident that nothing is suprising at all. The diocese is very fortunate to get two great kids who are now devoting themselves to God and to this diocese."

Straessle said the signing ceremony was unique and something the school hoped to continue.

"An athlete's devotion to his sport has an end in sight, it is a finite amount of time," Straessle said. "A young man's devotion to God, to the Church, to this diocese is a lifetime. It is unending, so certainly we are so pleased to be able to have this ceremony and send Stephen and Joseph off in a fashion that is befitting of their calling."

"I am very proud of having a son who has decided to become a priest," Luis de Orbegozo said. "I give thanks to God, to the diocese, the priests and Christ the King Church for helping guide him."

His son has always been a good boy, never causing any problem and in these tumultuous times it has been a blessing, he added.

"I told him, it is your decision, it is your career, but we knew he wanted to become a priest," he said. "We must pray for more vocations."

De Orbegozo's mother, Madeline, said she never tried to push her son one way or another.

"I have supported my son, always in anything he wants," she said. "He has always made the right choices."

Elser has always hoped that he had a vocation, his father said.

"I am a pediatrician and I think that maybe for a while he thought, 'Well, maybe I ought to be a physician,'" Joseph Elser said. "It was always 90 percent priesthood, 10 percent physician. I think it was a calling from early on."

"We are just overjoyed," Angie Elser said. "I am more than honored that Stephen has come to this decision. It is no surprise to us. I knew that Stephen wanted to be a priest from the time he was just a little boy. It was the things he said and the way he would act, very Christ-like."