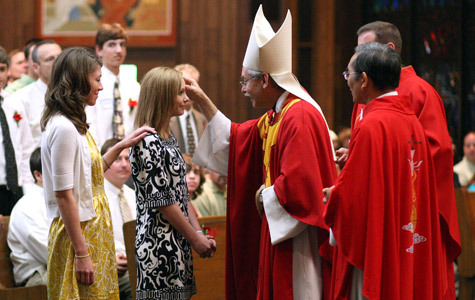 Bishop Anthony B. Taylor is not one to wait for people to come to see him. When his schedule is not full, he looks for opportunities to make surprise visits to small churches for Mass or stations of the cross.

"Making a surprise visit, I get to see the way things are normally in the parish and the parish doesn't feel like they have to plan a reception. It's a nice time to be together," he said.

Bishop Taylor will celebrate his first anniversary as bishop of Little Rock June 5. During an interview with Arkansas Catholic, he reflected on the past 12 months and what is ahead for him.

The bishop said when he sees that his schedule is open in the evening or on a weekend, he will try to call the pastor and tell him he wants to come for an impromptu visit. Even if he can't reach the priest, Bishop Taylor said he will go anyway and surprise the parishioners. So far he has made at least a dozen of the trips, including to the churches in Foreman, Ashdown, Mena twice, Little Italy, Carlisle, Barling and Jenny Lind. On St. Patrick's Day he joined St. Patrick Church in North Little Rock for Mass.

"Rather than sit around, I would like to be with some of our people," he said.

Bishop Taylor emphasizes the visits are for socializing and getting to know the parishioners, not to check up on a wayward priest.

"I like to be there with them and be supportive of them and to show my appreciation," he said. "We have some very fine priests in Arkansas with some communities that are very alive."

Other times the bishop will change his schedule in order to be at a parish following a tragedy, such as the April 9 tornado in Mena. The bishop celebrated the Easter vigil Mass at the Cathedral of St. Andrew and planned to leave on Easter morning to go to Ponca City, Okla., to see his family. Instead he decided to make a detour and celebrate Mass at St. Agnes before going to Oklahoma.

He said he was impressed "how people came together and supported each other and move forward ... It's important to be with people when they are having their difficulties, whether it's a disaster or when their pastor dies or any time when people need support. ... Even if I had something scheduled Easter Sunday morning, I would have seen what I could do to go down there. I viewed being with those people more urgent."

The bishop is also celebrating more confirmation Masses than in the past. If a parish, no matter how small, wants him to come to confirm their teens he will be there. While some parishes schedule their confirmation with several other parishes, the bishop said all churches can have their own confirmation if they want. He has even led confirmations for three or four students.

"It's whatever they want to do," he said. "If they want to have it just in their own small community, I'll come for that."

Over the past 12 months, the bishop has visited most of the parishes and schools and all of the Catholic hospitals.

"I plan to visit them all," he said. "A lot of times I have driven by them and they were locked."

Traveling the state has been an enjoyable part of Bishop Taylor's ministry. His Honda hybrid has 159,000 miles on it and the bishop plans to continue to put many more miles on it.

"I couldn't have a nicer car than the one I've got," he said.

He admits the challenging part of his assignment is the many homilies and speeches he is expected to give.

"I want to be well-prepared if I am going to speak on something and I give talks for a wide variety of events," he said. "I want to say something that is on target for what they are doing and what is going on in Arkansas."

As one would probably expect, Bishop Taylor doesn't have a typical day. He rises at 6 a.m. and has his holy hour. He then works on the various talks he will be giving that week. He usually arrives at St. John Center in Little Rock around 10 a.m. If he is available at noon, he goes to St. John Manor on the St. John Center campus to eat with the retired priests.

The lunch time visit is "also an opportunity to see how they are doing."

If he has an evening meeting or Mass, he will try to take off for a while in the afternoon to play racquetball, his favorite sport. He has three or four regular friends he plays with at the University of Arkansas at Little Rock Donaghey Student Center, including Mexican consul Andres Chao.

"I try to play three times a week," he said.

As Bishop Taylor looks forward to the next year, he said lots of work will be done on the pastoral planning process and on seminarian recruitment and education. He would also like to make progress on a new building for Catholic Charities of Arkansas and to make a decision on the fate of St. Joseph Home in North Little Rock. A committee is currently looking at future uses for the former orphanage.

From June 26 to July 9 he will finalize his portion of the canonization process for Father Stanley Rother, an Oklahoma City priest who was murdered in 1981. The bishop will visit Guatemala to take testimonies and interviews, a task he did for the Archdiocese of Oklahoma City before he was ordained a bishop.

On June 5, the bishop so far doesn't have any plans to observe his anniversary. Instead he will celebrate confirmation and the blessing of a new building at St. Boniface Church in New Dixie. "I can't think of anything better to do than that," he said.