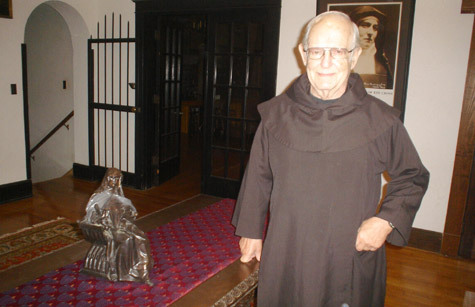 Leslie O'Malley
Father Raphael Kitz, OCD, stands beside a sculpture of St. Theresa of Avila, a patron of his order, at the Monastery of Marylake outside Little Rock.

Leslie O'Malley
Father Raphael Kitz, OCD, stands beside a sculpture of St. Theresa of Avila, a patron of his order, at the Monastery of Marylake outside Little Rock.

In 1953 Father Raphael Kitz, OCD, came to Marylake Monastery and became a novice in the Order of Discalced Carmelites. More than 55 years later, Father Kitz instructs novices at Marylake, and he celebrates his 50th year as a Carmelite priest.

Just south of Little Rock, Marylake Monastery serves as the novitiate house for the order's local province. As the novice master since 1993, Father Kitz has instructed at least 30 novices in "the lifestyle and teachings of the Carmelite tradition," he said.

Born and raised in Minneapolis, Father Kitz studied piano at the MacPhail School of Music for a year and studied music at Loras College in Dubuque, Iowa, for two years before he decided to join the Carmelites.

But by age 20, Father Kitz was considering the religious life instead of a music career.

"It was just God's grace -- he kept calling," he said. "I don't think there was anything more explicit than that."

He received a vocational pamphlet while he was attending Loras College, wrote to Marylake and was later accepted. At 22, he entered the order.

"I think it was the contemplative life, the prayer life of the order, that I was attracted to," he said.

The writings of St. John of the Cross and particularly St. Teresa of Avila inspired his decision.

"St. Teresa of Avila has always been an influence, and she continues to be," he said. "I feel this relationship to her -- her person in her writings, I guess."

After his novitiate year at Marylake, Father Kitz studied philosophy for two years under Vincentian priests at Assumption Seminary in San Antonio, Texas, and theology for four years in Rome at the Carmelite House of Studies.

On Sept. 19, 1959, Father Kitz was ordained in Rome. He was assigned to the Basilica of the National Shrine of St. Thérèse in San Antonio.

After multiple assignments in Dallas and San Antonio, Father Kitz returned to Marylake in 1990, making this assignment the longest he's ever had in one place.

When Father Kitz joined the order, novices had to be at least 18. Today many times they are older, even in their late 20s.

Father Kitz was also one of nine novices when he joined. Now there are fewer, with four in one year being a large group. Currently there is one novice.

When someone expresses interest in joining, Father Kitz suggests, "Simply come and visit us, speak with us. See if you have a vocation."

The priests spend their afternoons on spiritual direction, retreats and being chaplains to the Carmelite sisters and the Missionaries of Charity. They end their day with evening prayer and the Office of Readings, which is part of the Liturgy of the Hours.

"There is a substantial part of our life that consists of prayer," he said.

On the weekends they travel, helping out by saying Masses at parishes across the state. Father Kitz also travels to give retreats.

Father Payne refers to Father Kitz as "our St. Francis at Marylake" because of his relationship to animals. Father Kitz had a cockatoo named Dante for 21 years before it died last year. He feeds the geese that live on the lake and cares for Sally, the Marylake dog.

"The dog knows Raphael is her true master," Father Payne said. "She goes into mourning when Raphael leaves."

Every three years the order holds elections, meaning Father Kitz's assignment could change, and he may have to leave Marylake again.

"You would think a person his age would be thinking of retiring, but he's going like the Energizer bunny," Father Payne said.

"None of us really retire," Father Kitz said. "We just keep plugging."