From railroad to rural life, Father Burnie reflects on priesthood 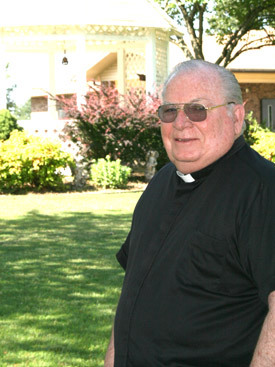 ST. VINCENT -- Nestled in the sleepy town of St. Vincent, nine miles north of I-40 on Highway 95 is the bustling parish of St. Mary Church. It is here that Father James "Jim" Burnie, CSSp, cares for the families of the parish.

Recently Father Burnie celebrated his 25th anniversary as a priest.

"I can remember always thinking about the priesthood," Father Burnie said.

However, it was not until age 53 that he was finally ordained as a Holy Ghost priest.

A Canadian, Father Burnie grew up in Orillia, Ontario and at age 14, told his mother he wanted to be a priest, but she was not supportive of the idea. She directed him to finish his schooling, Father Burnie said. Later at age 17, he joined the crew of the CN Railroad in Orillia. He worked for the railroad for many years and at age 33 decided to make a major life change and became serious about preparing for the priesthood, he said.

He traveled to Albuquerque, N.M., and joined the Little Brothers of the Good Shepherd order where he helped the group run a home for homeless and destitute boys.

He partnered with another priest to open additional refuge homes in Canada, Jamaica and Mexico before returning to Canada to formally study for the priesthood, he said.

Father Burnie said he chose the Spiritan order because he had volunteered at a house for homeless and at-risk boys and young men the order ran in Toronto.

"They were familiar and always encouraged me to seek God," he said. "The priest told me that if I were accepted into school, they would accept me into the order."

"I remember the church being jammed at my ordination," he said. "I've enjoyed my priesthood. I have no regrets at all. I would recommend it to anybody, if someone were to ask me about priesthood."

Before his arrival in St. Vincent, Father Burnie served as pastor of Our Lady of the Valley Church in Emmett, Calif. There he served a parish with 3,500 registered families, 800 or more children, and nine weekend Masses. Father Burnie was there for more than six years before deciding to retire to his native Canada.

"That lasted three months," he said. "I wasn't ready to retire."

He returned to California but was approached by his friend, Judy Stubbs, formerly of North Little Rock, to consider a pastorate in Arkansas.

Now five years later, Father Burnie is at home in St. Vincent caring for the 153 families of St. Mary Church.

"When I first came, I thought, 'What am I going to do here?'" he said. "But I am happy. I think I'm easy to get along with and they are good people here."

In his free time, Father Burnie tends to his nearly 30 banana trees as well as a vegetable garden. He said he does all his own cooking since he once worked as the crew cook on the railroad.