Father Hart got confirmation all along: He could be a priest

By Patricia May
Harrison Correspondent 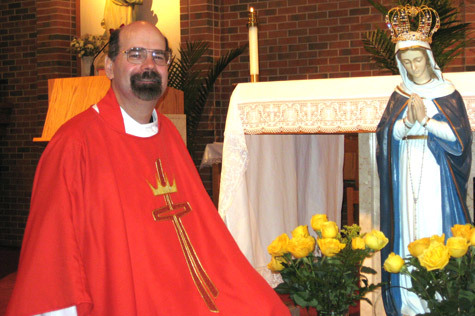 Patricia May
Father Gregory Hart, seen here May 30 at Mary Mother of God Church in Harrison, has three cousins who are studying to be priests.

Patricia May
Father Gregory Hart, seen here May 30 at Mary Mother of God Church in Harrison, has three cousins who are studying to be priests.

HARRISON -- For Father Gregory Hart, it was more a matter of when he would enter the seminary than a question of if he would.

He remembers first thinking about being a priest at the age of 5 or 6. As an elementary student at St. Theresa School in Little Rock, he was always asked to bless the football before the game commenced. His Grandmother Hart once told him she'd heard from an angel that he would become a priest. Fellow students at Catholic High in Little Rock voted him most likely to enter the seminary, and in college, a fellow student who was no more than an acquaintance asked whether he had ever considered becoming a priest.

"I had a lot of encouragement all through my life," he said. "I figured they can't all be wrong."

Then of course, there's the family legend that began with Father Hart's great-grandfather. Henry T. Kordsmeier, sole male heir at the time, wanted to ensure the family name would be carried on to future generations. He supposedly made a prayerful promise that at least one of his children would enter the seminary if only God would bless him with sons. True or not, it's certainly been a good bargain for the Church as several members of the extended Kordsmeier family -- Father Hart's mother was a Kordsmeier -- have chosen the religious life through the years.

Henry T. eventually had 12 children and 10 of them had large families themselves. One son, Bill, became a priest. Another descendant (second cousin to Father Hart), Msgr. Charles Kordsmeier, served Bishop Andrew J. McDonald as chancellor.

And even now, there's another generation considering entering the religious life.

"Three guys on the poster are (my) cousins," Father Hart said, referring to the diocesan vocations poster depicting current seminarians.

He's a 1980 graduate of the University of Dallas, where he earned a philosophy degree, and studied for the priesthood in Rome. A highlight of his seminary studies included serving as a deacon -- one of several -- for Pope John Paul II at Christmas Mass in 1981.

"We got to hold the ciborium (the vessel containing the Eucharist) while he said the words of consecration. That was special."

Talking about his family's involvement with the Church, Father Hart said his uncle, Msgr. John Kordsmeier, has been a great influence on him as have other relatives. His Grandmother Hart told him of her angelic vision when he was 10 or 12 years old. "You're very impressionable at that age (and) that always stuck in my mind."

Father Hart said he and his mother were always very close. She died two years before he was ordained.

"In a way, I see she's probably a great help to me on the other side."

In 1985, Father Hart served at St. Patrick Church in North Little Rock for 10 months before being assigned to the Church of St. John the Baptist in Hot Springs. He moved two years later to St. Michael Church in West Memphis, where his responsibilities included ministering also to Sacred Heart of Jesus Church in Crawfordsville and St. Mary of the Lake Church at Horseshoe Lake. His next assignment took him to St. Peter the Fisherman Church at Mountain Home in 1993 with responsibility also for St. Andrew Church in Yellville.

When Msgr. John Kordsmeier retired in 2000, Father Hart moved to Mary Mother of God Church in Harrison. A year later, St. Andrew Mission in Yellville was added again to his responsibilities.

For anyone considering the priesthood, Father Hart offered some advice: "Be very faithful to your Mass (and) have a special devotion to Mary in some way."

He added, "If you believe God's calling you, ask God to confirm your call and he'll confirm it."