Two men 'journey together to the priesthood' 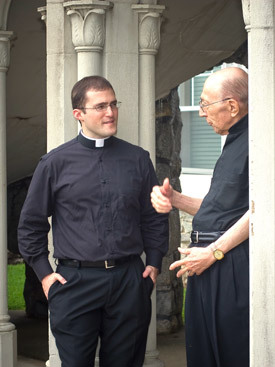 Eddie D'Almeida and James Melnick have followed similar paths to being priests.

Both were raised in small towns in Arkansas and understand the challenges of having to drive many miles to get to the next town for Mass. They met in 2003 at Holy Trinity Seminary in Irving, Texas, where they started their theology studies. They were both chosen to go to the Pontifical North American College in Rome in 2005. They shared summer assignments -- first in 2004 at the Institute for Priestly Formation in Omaha, Neb., then in 2005 learning Italian and in 2006 at a parish in northern Italy.

"It's a real brotherhood," Melnick said. "I don't know many priests who have had an opportunity to study together that long. It's a great blessing. to have. At one time we were supposed to have nine guys ordained this year. I guess it is divine providence that we made it and we were able to journey together to the priesthood. It's always going to be a good friendship. It's just like two brothers."

At 10 a.m. July 11 the two will be ordained to the priesthood by Bishop Anthony B. Taylor at the Cathedral of St. Andrew in Little Rock. It is the first double ordination the diocese has hosted since 2005.

After six years of studying and socializing together in the United States and Rome, they will part ways to begin their lives as diocesan priests.

D'Almeida, whose parents were born in Portugal, grew up hearing Spanish, Portuguese and English spoken in the home. For 12 weeks beginning in August, he will be studying Spanish at two schools in Mexico.

After completing his language immersion, he will be assigned to a parish. D'Almeida said he will continue to daily pray St. Ignatius' prayer, Suscipe (Latin for "receive").

"The prayer really formed me before I entered the seminary to freely give myself. That prayer has helped my whole life blossom," he said.

This summer Melnick will be filling in at parishes where the priests have left to take Spanish immersion courses. He will return to Rome in October to finish his studies at the John Paul II Institute. He was given permission to seek a licentiate in sacred theology, which requires an additional year of study.

He said he was inspired by many of the devout families who practice natural family planning he has met over the years to focus his studies on marriage and family.

"There is a desire to help them and to spread these types of families throughout the diocese. ... I was impressed with their generosity and their dedication to living holy and Catholic lives," he said.

He will return to the diocese in June 2010 where he will be given a pastoral assignment.