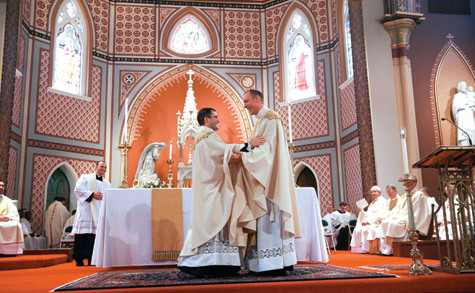 Bob Ocken
Father Eddie D'Almeida and Father James Melnick embrace at the end of the ordination Mass July 11 at the Cathedral of St. Andrew. They had studied in the seminary together for six years.

Bob Ocken
Father Eddie D'Almeida and Father James Melnick embrace at the end of the ordination Mass July 11 at the Cathedral of St. Andrew. They had studied in the seminary together for six years.

Bishop Anthony B. Taylor is looking for a few good men to infiltrate communities around Arkansas and change them from the inside out.

In his first priestly ordination, the bishop looked to two new priests to take him up on his challenge. Bishop Taylor ordained Father James Melnick and Father Eddie D'Almeida July 11 during a Mass at the Cathedral of St. Andrew in Little Rock.

"Our job is to infiltrate the world, to change it from within. In the world but not of the world," Bishop Taylor said in his homily.

In order to do this, the young priests must "preach the full truth of the Gospel" and spend at least one hour in prayer every day. An even larger task for them would be to die to one's self.

"You must live God's challenging truth yourself first, leave behind all that is comfortable but false in your own life first. Otherwise your words will not be credible, and that will require getting rid of everything that is not compatible with your vocation as a priest," he said. "I've got some bad news for you, if you don't know it already; we're a lot weaker than some people think and ordination does not change that."

Also, he cautioned them to not accumulate a lot of material possessions, even though they don't take a vow of poverty.

"If it looks worldly it probably is, and such a priest is secular in the wrong sense of the term when what started out as a vocation turns into a career and the desire to serve is replaced by a feeling of entitlement. People expected to serve their pastor rather than the other way around," he said.

Influenced from the new priests' seminary training in Rome and their own interests, the Mass featured songs in Latin, led by an all-male choir comprised of Catholic High School students and Cathedral choir members. On July 11 Father Melnick chose to celebrate one of his first Masses at St. Edward Church in Little Rock using the Latin rite.

The Rite of Ordination included several touching moments for the new priests and the congregation. The rite began with Msgr. Scott Friend, vocation director, presenting the candidates to the bishop and proclaiming they are "worthy" for ordination as determined by the seminary and diocese. The candidates then surrender themselves and prostrate themselves before the altar while the congregation sings the Litany of the Saints.

This moment was the most profound for Father D'Almeida.

"I was laying my life before the Lord, the Church, the bishop," he said during his reception in McDonald Hall where he greeted and blessed friends.

Father Warren Harvey of Pine Bluff and Father Thomas Keller of Carlise, who were credited with fostering Father Melnick and Father D'Almeida's vocations, assisted the new priests with putting on their stoles and chasubles.

Bishop Taylor then anoints the priests' hands with chrism oil and presents them with the paten holding the bread and the chalice of wine.

Following the ordination, Father Melnick said this part of the rite had the biggest impact.

The sign of peace at the end of the rite included a warm embrace first from Bishop Taylor and then the priests.

At the end of Mass, the bishop kneeled before the new priests and asked for their first blessing. The bishop responded by grabbing their hands and kissing them.

Following Mass, Elizabeth D'Almeida, mother of Father D'Almeida, was wiping tears from her eyes as she greeted friends and parishioners from St. Joseph Church in Conway where she and her husband Manuel raised their twin sons.

"I am a blessed man," Manuel D'Almeida said.

In an interview with Arkansas Catholic, Father Harvey, a Conway native, said he remembered being impressed with Father D'Almeida, but one time he was concerned about him. While in college the new priest played the guitar in the Life Teen band, but he was getting carried away with his musical abilities.

"The music was so loud," said Father Harvey, who would often visit the parish to celebrate the youth Mass. "I thought to myself, "Eddie, you ought to sit down. This is not a rock concert, this is holy Mass.'"

Father Harvey told the young guitarist he wanted to talk to him after Mass. But before he could say anything, Father D'Almeida confessed that he wanted to be a priest.

"What do you want to talk to me about?" he asked.

Marvella Melnick, a member of St. Jude Church in Jacksonville, said she felt joy seeing her son being ordained because he has followed the path to the priesthood since he was in high school, including serving as an altar server and lector.

"He is so happy," she said. "He always has God shining through his face."

Father Keller served at St. Jude Church while Father Melnick was in high school. The priest said he was impressed that the high school student would attend devotions to the Sacred Heart of Jesus and the Sacred Heart of Mary on the first Friday and first Saturday of the month. It would include at least six hours of praying and reading.

At one point Father Melnick stayed up all night following the First Friday devotion to discern if he was being called to the priesthood, Father Keller said.

"James is pretty sharp," he said. "They are two great guys."

In an earlier interview with Arkansas Catholic, Msgr. Friend said he has been evaluating Father Melnick and Father D'Almeida while they were in the seminary. He visited them every year while they attended the Pontifical North American College in Rome.

Msgr. Friend said he watched Father Melnick go out in Rome and he knew the names of every poor person they passed by.

"James has a special charism for the poor," he said.

"He (Father D'Almeida) went right up to him," Msgr. Friend said. "It has been a natural part of his way of thinking. He wanted to help people. That is a good quality."

Before taking his first assignment as associate pastor of Immaculate Conception Church in Fort Smith, Father D'Almeida said he looked forward to visiting the Carmelite nuns and Missionaries of Charity in Little Rock and celebrating Mass for them.

Father Melnick will be filling at various parishes this summer where the pastors are attending Spanish language training. In October he will return to school in Rome to finish his marriage and family classes.