Msgr. Sebaugh's parents prayed for a priest in the family 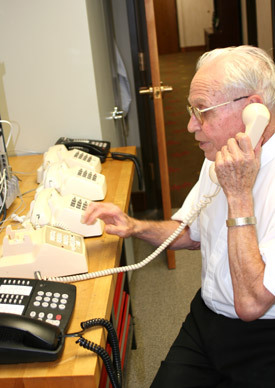 Msgr. Thomas Sebaugh has had a big year. In May he celebrated his 50th anniversary as a priest. On Aug. 3 he turned 80 years old.

Next year he will observe his 25th anniversary working at St. John Center in Little Rock as the director of information systems. He comes to work at the same building where he started taking classes as a high school student at St. John High School Seminary.

While most 80-year-olds would like to slow down from a full-time job, Msgr. Sebaugh has not even considered retirement in spite of several health issues in 2007 and 2008, including prostate cancer, shoulder joint surgery and a major fall.

"I don't ever think about it," he said. "I might get to a place where I have to. As long as I can keep going, I will be here. And as long as they want me."

Today the jovial priest shuttles into Morris Hall each day to his second floor office. He fields questions about Parish Data System software used by parishes and schools to maintain their parishioner information and contributions and school records. He also keeps St. John Center's voicemail and telephone system running.

Msgr. Sebaugh, a native of Camden, first came by streetcar to the St. John Center grounds in 1945 to explore the possibility of becoming a seminarian. The rector, Msgr. James E. O'Connell, encouraged him to fill out the paperwork even though Msgr. Sebaugh's parents were not present and he hadn't even mentioned to them about the possibility of leaving Camden to finish high school in Little Rock. Msgr. Sebaugh's family prayed the rosary nightly.

"The intentions were always that someone in our family would be a priest or religious," he said.

In 1948, after three years in the seminary, he left because of health problems. He worked as a radio station engineer in Camden and Little Rock for four years.

"Those were the worst years of my life," he said.

The thoughts of being a priest kept returning, and he was allowed to come back.

"I would kneel in the Cathedral and I would think about the ordinations I had attended and the Holy Week services there," he said.

After being ordained on May 7, 1959, at the Cathedral of St. Andrew, he spent his first 26 years as an associate pastor and pastor. His first assignment was at St. Edward Church in Texarkana.

For his first 15 years as a priest, he was an associate pastor, a position he felt fitted him.

"I would rather be an associate in a parish that had a school. I loved going over and teaching the kids in school. ... I wanted to stay in a big parish and be an associate," he said.

In Wynne in the 1970s and early 80s, Msgr. Sebaugh made a mark for himself as one of the early adopters of technology. When he arrived at the parish, there was not a central location for the parish records. He found some parish software through Priest magazine and bought a computer.

In 1985 Bishop Andrew J. McDonald assigned Msgr. Sebaugh to help St. John Center get more computers and train the employees how to use them. With his weekends free, he often filled in at parishes around the state. For seven years starting in 1992 he was the chaplain for the Missionaries of Charity at Abba House in Little Rock. Off and on for 25 years he has served as a chaplain at St. Vincent Infirmary Medical Center. He still can be found there Mondays and Tuesdays to celebrate morning Mass while the regular chaplain takes his days off.

He lives a couple of miles from St. John Center in a home he owns with his sister and brother-in-law. He looks after the yard work and plays with his great-niece and great-nephew who live next door.

"I feel very free on the weekends now," he said.