Pro-choice speakers are running out of arguments, he said 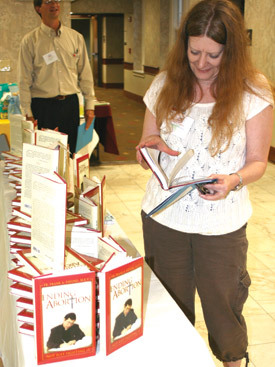 Malea Hargett
Joy Pohl of Dover looks over a copy of Father Frank Pavone's book, "Ending Abortion: Not Just Fighting It," before the start of the diocese's Respect Life Conference Aug. 28.

Malea Hargett
Joy Pohl of Dover looks over a copy of Father Frank Pavone's book, "Ending Abortion: Not Just Fighting It," before the start of the diocese's Respect Life Conference Aug. 28.

About 120 people attended the Aug. 28-29 "Called to be Faithful" conference at St. John Center in Little Rock.

"It was doubled what we usually have," Linane said.

It was the third year the Respect Life Office hosted a conference to update respect life committee members and other pro-life supporters about abortion and other life issues.

Donna and Marvin McCall of St. Mary Church in St. Vincent were first-time attendees. Donna McCall, her parish's respect life committee chairwoman, said, "It's very important to learn what other parishes are doing and catching up on the latest. No matter how big or small we are, we can all do something."

Linane said Father Pavone, whose ministry is based in Amarillo, Texas, received high praise from the attendees.

"He is so articulate and so expressive of all of the Church's teachings. He is very magisterial," she said.

Father Pavone, one of the most well-known pro-life speakers in the world, said he travels to an average of four cities a week. He started the conference Friday night by encouraging the pro-life supporters to be hopeful about the end of abortion in the United States.

"The days of legal abortion in this country are numbered. This evil is coming to an end... We are moving closer and closer to our goal, to our victory," he said.

"Victory is in our hands. We are not going to leave the resolution of this problem to the next generation... This is for us to accomplish."

He said his reasons for believing victory will come in his lifetime are the number of women who have had abortions and the fathers of the aborted babies who are coming forward to share the negative effects killing their unborn babies had. Many times these people are speaking out and telling others to not make the same mistake.

Support groups like the diocese's Project Rachel are growing to serve women who want to seek reconciliation with God and themselves.

These post-abortive women "become the sign to society that this doesn't work," he said.

In addition, many abortion doctors and nurses are closing their clinics and joining the pro-life movement.

"They are coming out of the industry by the hundreds," he said.

Another reason victory is closer is because now a majority of Americans describe themselves as pro-life, according to a Gallup poll. Even many of those who labeled themselves pro-choice would likely say they were against 99 percent of all abortions, he said. Incest, rape and the saving the life of the mother account for 1-2 percent of abortions, Father Pavone said.

A majority of people have never embraced abortion on demand throughout the nine months of pregnancy, he said.

"The majority of the people have always been on our side."

Father Pavone said he is also encouraged because medical advancements like ultrasounds and fetal surgery are indirectly supporting the pro-life cause.

"What they are doing is affirming the unborn," he said. "The other side is running out of arguments. They can no longer say this is not a real life."

On Saturday morning, Bishop Anthony B. Taylor celebrated Mass and delivered a message on the consistent ethic of life and being courageous to speak out against all attacks on human life. (Click here for Bishop Taylor's speech.) Following the bishop's talk, the Knights of Columbus state council presented an ultrasound machine to St. Joseph's Helpers, a pregnancy resource center in Little Rock. The Knights plan to raise enough money to send a machine to each pregnancy resource center in the state that wants one.

Other speakers at the conference were Janet Morana, co-founder of the Silent No More Awareness and executive director of Priests for Life, and Annie Casselman of North Little Rock, founder of Generations for Life, the youth outreach of the Pro-Life Action League.

In addition to speaking at the conference, Father Pavone had a meeting with priests Friday, preached three weekend Masses at the Cathedral of St. Andrew and spoke to 100 teens and young adults during a diocesan youth event.

Linane said she plans to make the conference an annual event. The 2010 conference will be held Aug. 13-14 at St. John Center.