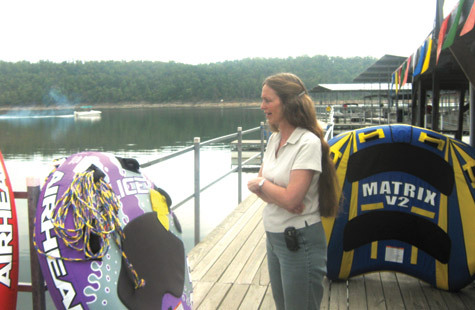 Armando Rios
Renee Cox, owner of Fout Boat Dock at Norfork Lake, talks about some of the items people on vacation can rent at the dock which is busy from the Memorial to Labor Day holidays.

Armando Rios
Renee Cox, owner of Fout Boat Dock at Norfork Lake, talks about some of the items people on vacation can rent at the dock which is busy from the Memorial to Labor Day holidays.

Although the economy has slowed the travel and recreation business, people are still traveling on charter buses, staying at hotels or spending some time on the water around the state.

Oftentimes, people get more than just service with a smile from Catholic parishioners who enjoy what they do.

Renee Cox and husband Glenn own Fout Boat Dock near Gamaliel on the shore of Norfork Lake in Baxter County.

Before becoming owners of the boat dock, the family owned a nearby resort and Renee remembers having to juggle work and attend Mass, occasionally playing the church organ and singing in the choir.

The couple, members of St. Peter theFisherman Church in Mountain Home, has owned the boat dock six years, and with the current staff they have, it is easier for Cox to take care of her Sunday obligations.

Owning a boat dock was not what she planned in her younger years, but it is something she enjoys, Cox said. She originally planned to go into nursing when the couple lived in Michigan. They moved from Michigan to Baxter County to build the resort.

"It seemed to fit, being comfortable with people, we raised our kids at the resort and they all ended up with a good work ethic and worked their way through college and all that," Cox said. "It was almost a fluke that we decided to move here and build a resort. When this (boat dock) became available to buy, we got this and sold the resort."

"You do have to like people and you have to be willing to spend time chitchatting, lot of people are on vacation and they want to know about the area," she said. "Probably one of the biggest things that is an asset here is you have to like what you are doing because it comes across with people if you don't."

The business sees a lot of repeat customers.

"That is fun to see because you get to see their kids grow up," Cox said.

"It is very seasonal here, pretty much from the first holiday, to the last holiday is when it is busy from Memorial Day to Labor Day," she added.

Although business is slower after the Labor Day holiday, there are people who have their boats in rented stalls.

"So those people continue to come probably into October, every once in a while if it is a nice day," she said. "Some people use their boats weekly, some two or three times a year."

Cox attributes the slowdown in business the past two years to the economy.

The majority of the customers come from outside of Baxter County, she said.

"We get people from West Plains, (Mo.), Thayer, (Mo.), some from Jonesboro and Paragould, that area," Cox said.

The boat dock offers rentals, including pontoon boats, ski boats, fishing boats and wave runners, as well as tubes, and wake and kneeboards in addition to selling gas and the little convenience store with ice and snacks.

"One weekend we might have everything go out, and the next weekend they are all sitting there," Cox said. "It is nothing that you can really predict. Overall it is a pretty good business."

Nice weather brings people out, a bad forecast can wipe out business, even if the sun eventually comes out from behind the clouds, she said.

"You are always helping tourists enjoy their time, on the holidays," Cox said. "That was more of a problem when we the kids were younger and we had the resort. I never would have dreamed I would be doing something in tourism when I was growing up or starting college. I worked at restaurants and liked people, but I never looked in that direction.

They say you are a lucky person if you can like what you are doing for your job."

For brother and sister Jim and Janie Lienhart, following in their father's footsteps into the tour bus business just seemed a natural.

They take many fellow Catholics, young and old, who travel with church groups to different locations for recreation or retreats.

Their father, Henry Lienhart, started the business in 1944 as Houston-Bigelow Bus Line. It is now known as Arrow Coach Lines Inc.

The elder Lienhart operated several local routes in and around Pulaski County.

According to the company Web site, http://www.arrowcoahlines.com, the company name came from the names of two small towns in Perry County, which along with other small towns were provided transportation service by Houston-Bigelow Bus Line to and from Little Rock.

The company specializes in charter, tour and contract bus operations.

However, it was not what the brother and sister planned to do. Janie Lienhart, a member of the Cathedral of St. Andrew in Little Rock, said her father started having health problems the year she graduated from high school so she became more involved in the business.

It also gave her time to get to know her father better, she added.

Working at the family company became a good fit, she said. Initially, she had planned to go into teaching. Jim and Janie have worked for the company for more than 30 years, not including the summers while growing up.

Jim Lienhart, a member of St. Theresa Church in Little Rock, also had other plans before joining the family business.

"I was majoring in agriculture and my dad had a fit. I had to change my major to business," he said.

Their father died in 1981 and Jim and Janie were left to decide whether to sell or operate the business.

"We changed a lot of things; Daddy did a lot of regular schedules, like the Greyhound-type of schedules and we dropped all of them within a year of his death and went smaller, something that we could handle ourselves, and then grew in our own direction,"Janie said. "Charters that we do know were pretty much daddy's sideline."

They are chartered by athletic teams, Razorback fans, the military, and serve the "park and ride" program for University of Arkansas for Medical Sciences.

"The bus business is never boring," Janie said. "Every day is a new day basically. We have a lot of customers that are repeat customers."

The furthest their chartered buses have traveled is to Alaska.

They have younger family members who come in and work, continuing the family tradition.

The Guesthouse Inn was originally started by a physician who spent his residency at St. Vincent Infirmary in Little Rock, as a place for hospital visitors to stay.

For 23 years, husband and wife Judy and Tom Adam have been managing the hotel, which is situated next to the hospital campus, ministering to people.

The hotel is a privately owned hotel, not owned by the hospital as many people think, Judy Adam said.

"We were built to take care of patients and their families, but we are a hotel so anybody can stay here," she said.

Unlike other hotels, Guesthouse Inn guests usually know when they are coming, but not necessarily, how long they will stay because of doctor's appointments and tests, Judy said.

"Sometimes that creates a little problem," she said. "We never make anybody leave, if they have to extend it they extend it and if somebody else is coming in, but this year has been slower."

She attributed the lower occupancy rate to the economy. Some people are foregoing elective surgery or having surgery closer to home.

"At one time the hotel was running with 97 percent occupancy and when people had to stay over it was really rough," Judy said.

Managing the hotel can be difficult.

"You can be talking with someone who has good news and they are going home and you are very happy for them, then you turn around, somebody walks in and they just lost their spouse, that makes it really rough," she said. "You can be on a high here and then a low. But at the end of the day you say, 'God knows what he is doing.'"

Also, the hotel has apartments for people who are staying for a month or longer.

Even for a brief moment, the Adams, members of the Cathedral of St. Andrew in Little Rock, become involved in the lives of the people who stay there.

"We do a lot of listening. We don't have the answers to everything but just listening helps," Judy said. "A lot of them we consider family."

In addition, as family, they have a tradition where Judy Adam cooks a Thanksgiving Day meal for all those who are at the hotel. Years later, many recall the thoughtful gesture.

The couple feel they minister to their customers, Tom Adam said. Many years ago, when Judy mentioned that she was thinking about running a hotel, Tom said he thought it might be interesting. He saw himself taking care of the maintenance while Judy did the bookkeeping.

"Ironically, this came along and this is how we got into this and we were really blessed," he said. "I do believe the Holy Spirit pulled us over here with finesse. There is no doubt about it because we have had a lot of sick people, thousands of them, and we have ministered to them, walked with them, we have taken them Communion in the hospital, here in the hotel."

The couple has a number of photo albums with many memories of people who have stayed there, with photos, cards and letters.

Tom's Bible holds many cards from people who have died over the years.