Take a tour of Arkansas' own wine country

Wineries in the Altus area are gearing up for Weinfest Sept. 26 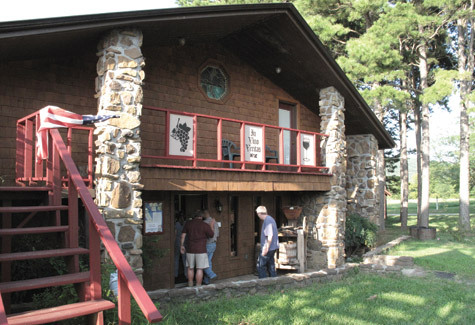 ALTUS -- Between the Ozark and Ouachita mountain ranges lies the Arkansas River valley, where the fertile soil and mild climate drew Swiss-German settlers in the late 1800s. Many of these families established vineyards and wineries, some of which still operate today.

Just south of Interstate 40 about two hours or less from Fayetteville, Hot Springs or Little Rock, signs along Highway 186 heading toward the tiny town of Altus point the way to several of these wineries. All are open to visitors and offer wine tastings and retail sales. Some also offer winery tours.

But the area has other amenities as well. With restaurants, places to spend the night and even a historic church, there's much to entice visitors to linger. Special events such as grape stomps and festivals also help draw tourists throughout the year.

Right at Exit 41 on Interstate 40 is the Swiss Family Bistro, gift shop and liquor store owned by Wiederkehr Wine Cellars and open daily. The winery itself is just a few miles south on 186 in Wiederkehr Village, on top of St. Mary's Mountain.

Visitors to the winery can have lunch or dinner at the Weinkeller Restaurant, originally a wine cellar dug out of the hillside by winery founder Johann Wiederkehr in 1880. The restaurant is listed on the National Register of Historic Places.

Johann's grandson Al Wiederkehr runs the winery today. In the tasting room, he pours samples including three low-carbohydrate, sugar-free wines. With a sweet, "fruit-forward" taste from a natural sweetener instead of an artificial sweetening agent, these wines are the result of extensive research and testing that he began in 2004.

Wiederkehr, along with other wineries in the Altus area, is gearing up for this year's Weinfest, set for Sept. 26. The festivities at Wiederkehr Village will include a grape-stomping contest, live music, polka dancing, carriage and horseback rides, and concession stands featuring international cuisine.

Virtually next door to the Wiederkehr winery is St. Mary Church, worth a stop to take in the pastoral mountaintop setting and see the Sistine Chapel-like paintings and walls lined with gold leaf. Also known as Our Lady of Perpetual Help, the basilica-style church was built in 1902. Mass is celebrated at 5:30 p.m. Saturdays and 9 a.m. Sundays.

The deacon at St. Mary's is Mathew Post Sr., patriarch of the Post Familie Vineyards and Winery on Highway 186 in Altus. The family, descendants of German immigrant Jacob Post, has grown grapes and made wine since 1880.

Mathew Post Sr. and his father, James, established Post Winery at its present location after World War II. Now retired, many of his 12 children run the family business.

The family's Catholic faith is integrated into the wine-making process. Rooms that hold the fermentation tanks bear Bible verses written on the walls or on plaques.

Ben Hooks, who works for the winery in retail sales and distribution, said the wine is prayed over at each step of the fermentation process, and a priest blesses the wine each year on Dec. 27, the feast of St. John the Evangelist.

Besides guided tours of the fermentation and storage rooms and a chance to taste wines in the gift shop, visitors can also take a self-guided tour of the Post vineyards.

About a 30-minute drive away, across the Arkansas River on Highway 22 in Carbon City, is Cowie Wine Cellars, owned by Robert and Bette Kay Cowie.

Robert Cowie is a deacon and pastoral administrator at St. Anthony Church in Ratcliff and often assists with services at nearby Subiaco Abbey, where he once attended school. At 68 "and a half," he proudly adds, he's been making wine for 54 years.

"It's been a passion all my life," Cowie said.

"We're small, one of the smallest wineries in Arkansas. We don't want to be bigger. You have to come here to try the wine and buy the wine."

"Our bread and butter is tourism," Cowie added.

Despite its size, the winery has much to offer visitors, including the Arkansas Historic Wine Museum. The nonprofit, educational facility is dedicated to preserving the historic information and artifacts of the state's winemaking tradition.

The museum's exhibits include photographs and government records, wine-making equipment and old bottles and labels from long-defunct Arkansas wineries.

The Cowies run two bed-and-breakfasts, and a third is in the works. Also under construction is a small chapel where the couple plan to be buried.

Perhaps the most unique feature, also a work in progress, is the bell tower Cowie is building at the chapel's entrance for his growing collection of bells. Now 34 feet tall, it will eventually reach 44 feet. He rings the bells at 6 p.m. daily while he and his wife pray the Angelus.

"So far the neighbors haven't complained," he said.

While the winery is too far from Altus to participate in Weinfest, Cowie Wine Cellars holds its own annual celebration after the grape harvest, on a Saturday in mid-September. This year's Cowie Wine Fest and Arkansas Championship Grape Stomp was held Sept. 12.

Another annual event is the Cowie International Amateur Wine Competition, held on the last Saturday of April. Besides drawing tourists, it gives the Cowies a chance to display their large selection of home wine-making supplies, which they also offer for sale.

Although the Cowies' seven children all chose other careers, Robert Cowie is certain the business will continue after he and his wife are gone.

"It will go on. God has always taken care of me."