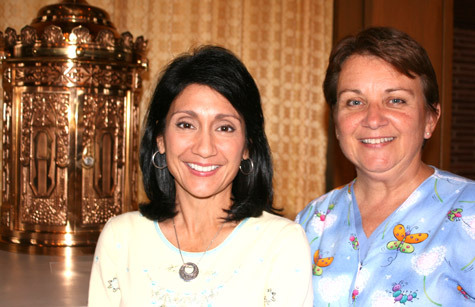 Malea Hargett
With the support of the diocesan Vocations Office, Angie Elser and Evelyn Hart started the Mothers of Major and Minor Seminarians prayer watch this summer. The ministry is open to all Catholics.

Malea Hargett
With the support of the diocesan Vocations Office, Angie Elser and Evelyn Hart started the Mothers of Major and Minor Seminarians prayer watch this summer. The ministry is open to all Catholics.

A new prayer ministry was created by two mothers of seminarians recently to give comfort to the seminarians and their families.

Evelyn Hart, mother of Andrew Hart at the Pontifical North American College in Rome, and Angie Elser, mother of Stephen Elser of Holy Trinity Seminary in Irving, Texas, conceived the idea for the ministry while enjoying coffee together this summer. Both attend Christ the King Church in Little Rock and have been involved in parish activities together.

The women started Mothers of Major and Minor Seminarians or MOMMS as a prayer watch for the 27 seminarians for the Diocese of Little Rock.

Elser said the idea for MOMMS came to her following the signing ceremony May 8 at Catholic High School when Stephen Elser officially signed up as a seminarian.

"Because of my son's trust and faith in God, I want to guarantee my son that every day of his life, he will be covered in prayer as he begins his journey toward the altar," she said.

Hart admits she wanted to have a bond with the other seminarian mothers and feel supported while her son was away in Rome.

"I always felt I needed contact with the other mothers," she said. "I needed something that I wasn't getting. We all worry, we all wonder, we all pray."

Hart and Elser met other mothers during a Mass and luncheon for seminarians and their families at the Cathedral of St. Andrew in Little Rock Aug. 1 and got 14 other mothers to agree to pray at least one day a week for the seminarians' intentions. The remaining mothers were not able to attend the Mass and will be contacted.

At least one woman is praying every day of the week. On that day she might attend daily Mass, say a rosary, go to eucharistic adoration, pray a vocations prayer or make some sort of sacrifice that day for the seminarians' intentions.

Hart said, "We hope this creates a bond, a prayerful bond, a fellowship. We are delighted and honored and awestruck that our sons are listening to God's call."

They lift up to God one simple prayer: For the seminarians' intentions and "whatever the young men need that day."

"The Lord knows what each young seminarian needs each day," Hart said.

MOMMS is not limited to mothers of current seminarians. They said any mother, father or Catholic is invited to join the prayer watch.

"We are the foundation of it. We are the ones that know every day we are praying," Hart said. "If you want to adopt a day, you can, not as a mother of a seminarian, yet. But just because you know it's a powerful and important thing."

Msgr. Scott Friend, vocations director, has been supportive of Hart and Elser's new ministry. He has also asked them to put together packets of information for the seminarians' families to inform them more about seminary life.

St. Mary has been chosen as the patron of the prayer watch.

Evelyn Hart and her husband Robert have two other younger children. Hart said she has been involved in five other successful prayer watches. She and her husband are natural family planning instructors.

Angie Elser and her husband Joe have five other younger children. She is an hourly coordinator for the perpetual adoration chapel.

For more information, e-mail Hart at or Elser at .