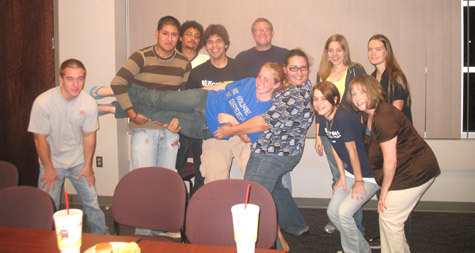 Sister Kimberly, who has brought technology to her position as vocation director through vocation chats, blogs, Facebook and a lively Web page, had had a very busy summer hosting young women at the Summer Discernment Retreat and Come and See Weekends, but when she received Tingquist's call she began to pray and dialogue with prioress Sister Maria DeAngeli to discern God's will.

Her "yes" has benefited both Catholic Campus Ministry and her full-time vocations job.

"Campus Ministry has put a renewed energy into my monastic calling and into my job as vocation director," Sister Kimberly said. "I've been in vocation ministry eight years now, and I didn't realize how much I missed parish and youth ministry until I went back to UAFS."

Sister Kimberly holds a bachelor's degree in pastoral ministry from Dominican University in River Forest, Ill. While she was in college, she worked as the campus ministry sacristan and served an internship at the ministry center. In her pastoral ministry work at St. Mary Church in Helena, and St. Andrew Church in Marianna, she worked with youth ministry and religious education.

As vocation director, she is an active participant in Subiaco Abbey's fifth grade vocation days and visits schools, religious education programs and college campuses. She maintains an active online correspondence with as many as 150 vocation contacts, many who learned about the monastery through its Web site.

Catholic Campus Ministry at UAFS has been growing along with the university population. This fall, for the first time, the group is meeting in the student center every Thursday night, and Dr. Paul Beran, university chancellor, is a strong campus ministries supporter.

"We have some hopes of expanding campus ministry and having a permanent building, working with Dr. Beran and the diocese," Sister Kimberly said.

There are about 60 students registered with CCM, and anywhere from 16 to 30 regular participants. After campus ministers Drew and Adrienne Michaels were relocated to northwest Arkansas, the group was led by two adult volunteers, Jeff Hines, former Life Teen music director at Immaculate Conception Church, and Jeff Smith, former Life Teen youth minister.

The college students meet at 7 p.m. every Thursday in the campus student center and attend the 5 p.m. Sunday Life Teen Mass at Immaculate Conception Church.

They joined other campus ministry groups to pray for their nation and their school at "See You at the Pole" Sept. 23. They have a fun activity each week and have two retreats planned this year. UAFS student Humberto Rosales submitted the winning T-shirt design for the diocesan campus ministry retreat to be held in Little Rock.

"She has been a fantastic addition to CCM this year," Garrett said. "I am so grateful for everything she has done to enhance our ministry. One thing she has been doing is our My Space page."

Campus ministry advisory council member Jacob Henderson said, "Sister Kimberly is one of the best things to happen to our CCM group. We are all very grateful to have her with us this year. Her abundant energy and great attitude helps lift everyone around her up."

Sister Kimberly is equally appreciative of the students.

"It's a wonderful venue to meet with young people and young Catholics who are on fire for their love of God and eager to know more about their faith. I am still a full-time vocation director. Catholic Campus Ministry is part-time and I try to be very aware of my time for both positions to be able to give it my best. To me they are kind of like hand in glove, not such polar opposites that it's difficult. Meeting needs for each has been fairly fun and easy," she said.

The new vocation/formation team is a strong support for Sister Kimberly as she brings her energy and enthusiasm to young adults on campus and young women discerning potential vocations.

UAFS Catholic Campus Ministry is open to all young adults in the area, including those who are attending other area schools or are working full-time.