Bill Hogue has been coaching in Little Rock Catholic schools for 38 years. 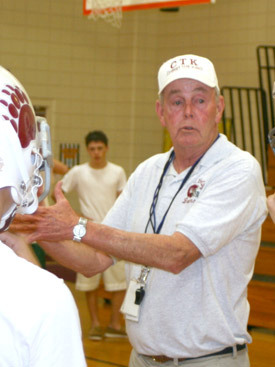 Armando Rios
Christ the King head football coach Bill Hogue demonstrates to some of his players what he wants them to do during a practice session held in the gym in late October because of rain.

Armando Rios
Christ the King head football coach Bill Hogue demonstrates to some of his players what he wants them to do during a practice session held in the gym in late October because of rain.

Bill Hogue started off as a volunteer and quickly fell in love with what he has been doing for more than four decades, most of that in the Catholic school system in Arkansas.

"Coach Hogue" has coached elementary and junior high school students for 38 years, primarily at Our Lady of Good Counsel School until it closed three years ago and now at Christ the King School, both in Little Rock.

Having been a coach in the Catholic schools for so many years, he has been reintroduced to a second generation of athletes he coached years before.

"Right here, right now, I am doing it," Hogue said one recent school day. "Quite a few, whose parents I coached at Good Counsel, their kids are here."

Except for the years, not much has changed.

"Nothing comes to mind as being different, other than I am older," Hogue said. "The kids are about like they were back then. Of course, the discipline back then was better than it is now. Playing football, it is about the same. They have to behave or they are going to run or do something."

I thought it was incredible, an awesome thing to have Coach Hogue coach my son," Eric Wewers said. "He was very disciplined, very insistent on discipline and taking care of your business, but also making it a lot of fun. He was always telling corny jokes. He was just, and he still is a lot of fun to be around."

He sees Hogue from a different angle now, as he stands beside him coaching the students at Christ the King.

"It is a tremendous experience to be able to see him in a different light," Eric Wewers said. "It was one thing to play for him, another to coach with him. You see how he resolves issues with the boys.

"I was happy to see Coach would be teaching (Logan) the same values as he taught me," Eric Wewers continued. "It is very consistent with the way I was raised. You win with class, you lose with class, and you give 100 percent. That was the great thing."

Both Eric and Logan agree on one thing.

"I learned a lot of old school stuff, to be overall a good person," he said. "He helped me through school, making school less stressful, being there to comfort people."

Logan Wewers, a 10th-grader at Catholic High, said he thought it was "really cool" having the same coach his dad did.

"I went back in my dad's yearbooks when he had Coach and how my dad would tell me stories and the next day (Coach) would do the same thing, he always coaches the same thing."

Hogue always watched over and protected his students, always knew what was going on, Logan Wewers added.

Hogue, 66, got involved with Good Counsel sports in the 1960s when he volunteered to help the football team. His first season as a paid faculty member was 1971. His football team had a 10-0 record. His last year at Good Counsel, the school ended the year on a winning note with an 8-0 record.

Even before he joined Good Counsel's staff, he was coaching. In fact, he was coaching while still in school at Central High School. He quickly learned it was what he wanted to do.

"A friend of mine was coaching a baseball team, he was a couple of years older and he asked me to help," Hogue said. "I did not know that much about coaching. I had played baseball and had played football. He asked me to come over and help him coach and I went and just got hooked and fell in love with it. We had pretty good teams.

"Then the director of the Boys Club asked me if I would take one of the elementary school teams," he continued. "The first team I coached was the Woodruff Elementary School. During the summer I worked for the Boys Club. Back then the Little Rock School District paid the volunteers $1 a day to coach football, basketball and softball. That was for one year then they dropped their elementary program and the Boys Club picked it up."

After he graduated from high school he worked at the Arkansas Democrat. That was followed by a stint in the Army during the Vietnam War. By some quirk, his unit never left the country and was stationed at Fort Campbell, Ky. He was a chaplain's assistant.

"I really enjoyed that, but I was ready to get out," he said. "It was in the middle of the Vietnam War and I thought for sure we were going to be going over there. I came back and went to college on the G.I. Bill. While I was there, I helped a coach at Forest Heights Junior High. Then I had a good friend who was a police sergeant with the Little Rock Police Department. He was coaching a team through the YMCA, and he and I worked together for a year or two. Then he went on to Good Counsel to coach a year, and he brought me over there with him and they hired me part-time. While I was there I coached football, basketball and track."

When Good Counsel closed in 2006, Hogue was asked to join the Christ the King staff. There he coaches the seventh- and eighth-grade football teams. Off the field, he is a teacher's aide and after-school care staff member.

What has kept him in it all these years?

"I guess the kids; I just fell in love with the kids," Hogue said. "I really enjoy them, watching them develop and mature."

Over the years he coached former Arkansas Razorback coach Houston Nutt and some of his brothers. He also knows of at least one young man he coached who graduated from Central High School who made it to the NFL.

"I still love it. How much longer I am going to do this? I don't know," Hogue said.

He noted that this year participation in the Little Rock Parochial League was down.

"We only have four teams, us, Christ Lutheran, which has St. Theresa School's seventh grade playing with them, and they get kids from Anthony School and Our Lady of Fatima in Benton. Holy Souls School is combined with St. Edward's School, and all of the North Little Rock Schools are combined; they play with IC (Immaculate Conception), Immaculate Heart of Mary and Catholic Academy," he said.

On Oct. 31 Christ the King played Immaculate Conception in the Parochial Bowl and won, 14-12.

See more news about sports in Catholic schools every month on the NEW monthly "Good Sports" page, only in