Saintly Mother Agnes not up for canonization 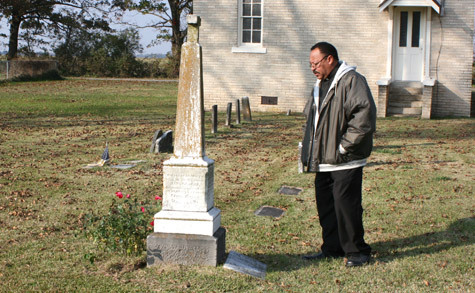 Armando Rios
Father Warren Harvey, pastor of St. Joseph Church in Pine Bluff, gazes at the marker for Mother Agnes Hart in the cemetery next to St. Mary Church in Plum Bayou recently.

Armando Rios
Father Warren Harvey, pastor of St. Joseph Church in Pine Bluff, gazes at the marker for Mother Agnes Hart in the cemetery next to St. Mary Church in Plum Bayou recently.

PLUM BAYOU -- A picture of a Sister of Loretto hanging on the rectory wall got the best of Father Warren Harvey's curiosity as he prepared to move to the rectory at St. Joseph Church in Pine Bluff in 2007. Now Mother Agnes Hart is the talk of the parish and town, proclaimed a "saint" with a miracle cure attributed to her intercession. Father Harvey would like to see her become a canonized saint.

Bishop Anthony B. Taylor, however, said for a number of reasons, it is not practical to pursue her official sainthood cause.

"We may be convinced that she is a saint, but I don't think that the kind of evidence exists that Rome requires for introducing a cause for canonization," he said in an e-mail. "What we can do, however, is research her life and share her edifying life story -- that is the main reason for canonization, to build up the Church -- and even without canonization, anyone in heaven is a saint (with a small 's') and knowing of her holiness of life can inspire us to greater faithfulness to the Lord today."

Father Harvey and Father Terrence Gordon, FSSP, who had driven Father Harvey to Pine Bluff for a meeting with the then-pastor, Msgr. Jack Harris to discuss the parish, started trying to learn who the religious sister could be in 2007.

Through the Internet, Father Gordon learned that Mother Agnes had been buried in the church cemetery in 1839 at St. Mary Church in Plum Bayou, the first Catholic church in the state. Her body had to be moved because the Arkansas River changed its course and was taking over the church cemetery. Father Gordon learned that she when they dug her up to move her, her body was incorrupt. According to the book, "Loretto: Annals of the Century," she was the last sister buried without a coffin in the ancient custom.

The book tells the history of the Sisters of Loretto whose motherhouse is in Loretto, Ky. Mother Agnes entered the order there shortly after graduating from its academy. She was sent to Genevieve, Mo., and from there to Pine Bluff, along with five other sisters to start a convent and school, the first Catholic school in Arkansas, Father Harvey said.

"She is an example to me of courage and strength and willpower," Father Harvey said.

"Like the book 'Loretto: Annals of the Century' says, the people believed that when they were burying Sister Agnes, they were burying a saint. I believe that too. I think she is worthy of sainthood by virtue that she brought Catholic education formally to Arkansas, ... and by her courageous life and willingness to serve God's people in a really, very difficult territory at the time, is worthy of sainthood.

Father Harvey reads from the book, "Years later, when the inroads of the river required the disinterment of many, the body of Sister Agnes was found entire and petrified, an occurrence which added to the reverence in which this zealous religious was held by the community."

Father Harvey said he understands the canonization process is a long and costly process and at least one verified miracle is needed.

"We possibly have one miracle," Father Harvey said.

His wife had a picture framed and in the room where he could see her all the time. In addition, she sent copies of the photo to relatives all around the country who also prayed for her intercession.

"I was pretty much a basket case with cancer," said Gregory Mattics, 53, of Pine Bluff. "Father Harvey had introduced Mother Agnes to the church. I was unconscious at the time. I woke up in intensive care a couple of days after that. My wife told me Father Harvey had introduced this nun who had been here in Pine Bluff and buried out in Plum Bayou and people asked for her intercession to God to save my life. My wife and Father Harvey said the day he presented Mother Agnes to the church and to the parishioners, my health began to change for the better."

Previously, his wife had been told to make funeral arrangements, he added.

Doctors performed tests later and found him to be cancer-free, Mattics said.

"Mother Agnes definitely interceded in my life," he said. "I am healthy, went back to work Dec. 1, 2008, 14 months after I had cancer and struggled. I am doing pretty good, all attributed to God, Mother Agnes and people who prayed."

Mattics said he still prays to Mother Agnes. "I have no doubt at all that she is a saint," he said.

Father Harvey said he had done some research at the Vatican's Web site and learned one of the first steps in seeking sainthood for someone is to make the person known in the community, which is what parishioners are doing.

Cardinal Jose Saraiva Martins, head of the the Vatican's Congregation for Saints' Causes, said in 2008 that local dioceses need to take "greater caution and more accuracy" in the opening of new sainthood causes. Bishop Taylor's decision to not pursue the canonization process for Mother Agnes is based on his experiences. He was the episcopal delegate for the sainthood cause of Father Stanley Rother, an Oklahoma priest who was murdered in Guatemala in 1981.

"I have learned that causes of canonization are much more complicated than people realize," Bishop Taylor said. "We had to initiate that case no later than 30 years after his death because after 30 years a case becomes a 'historical' cause -- and thereby much more difficult, in part because with the passage of time firsthand eye witness testimony becomes less available. In the case of Mother Agnes Hart, firsthand testimony is no longer available. One problem with pursuing the Mother Agnes Hart cause as a historical cause is the scarcity of contemporary documentation about her -- material written while she was still alive.

"Moreover, we have little evidence of a continuous cult of her memory, nor has there been a steady stream of the faithful visiting her tomb over all these years."