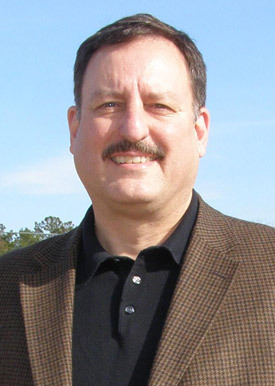 HOT SPRINGS -- The goal is in sight. Hours of seminary study are winding down. Very soon, George W. Sanders Jr. of Hot Springs hopes to fulfill what he says is his life calling.

He wants to wear the collar of the Roman Catholic priest.

"I think those who know him are just so excited that he is reaching the goal he has wanted to attain," Carolyn Wethington, parish director of religious education, said. "Everybody knows his story and how long it's taken, and his tenacity. Everybody's really excited about it."

Sanders, 54, was a Charismatic Episcopal Church priest for three years. George and his wife, Brenda, converted to Catholicism in 2003. Hot Springs has been their home since 1994. The parish and city are a deep part of their faith walk.

One of the early influences in the decision of George and Brenda Sanders to become Catholic was Father James West, the former pastor at St. John Church. George and Father John first met at a pro-life rally. A solid friendship developed. Father West also had been a convert.

"One of the great things is he (Father West) never condemned us," Sanders said about his and Brenda's journey to Catholicism. "He appreciated us. He told us I will become Catholic; that was after we became close friends and I shared with him my passion and love of the Church."

Sanders, vice president of finance for U.S. Food Service of Little Rock, is attending classes through St. Meinrad School of Theology in St. Meinrad, Ind., once a month. He hopes to become a transitional deacon in 2010 and be ordained a priest in the fall of 2011.

Ordination will cap years of more than seminary studies. Sanders has been visible and active in teaching religious education classes at St. John. The experience got "exciting," as he puts it, by having a group of 30 teenagers. Most ages were 14 and 15. Some had been to Mass every Sunday. Others had never been to Mass. He has done this for the past four to five years.

Sanders also has worked on parish retreats and with the parish youth group.

Someone talking with Sanders will find out in a few minutes he is eager to share his enthusiasm and love for the Church. His personal story of coming to the Church began with an interest in the writings of the early Church fathers.

"St. Cyprian is my patron saint. He's the one who said, 'Outside the Church there is no salvation,' " he said.

It's important to point out that the road that Sanders is following to ordination isn't part of the work by Pope Benedict XVI to reach out to Anglican priests, as reported in October.

Actually, Sanders' experience is a glimpse into the way that the Church has reached out to those who were pastors in Protestant denominations. And his path is different from the one followed by married and former Episcopal priest, Father Alan Rosenau, an associate pastor of St. John and St. Mary churches in Hot Springs.

Father Rosenau became a Catholic priest in 1988 under the "pastoral provision" of the late Pope John Paul II.

By contrast, Sanders must participate in an "extraordinary process" and one that requires the express signature and permission of the pope himself to proceed to ordination.

Sanders said the "extraordinary process" isn't a change in Vatican policy. Rather, it is an existing process that recognizes that Protestant religions have people who have been called to a religious vocation.

"I want to emphasize that this isn't a process that even if they were baptized Catholic and became an evangelical minister and wanted to become Catholic again, this provision isn't open to them," Sanders said.

Priests who are married cannot serve as the pastor of a church but for the very good reason that they have obligations to marriage.

"It's a grace of the Church," Sanders said.

Married or not, members of St. John are simply thrilled to have a new priest come from their parish.

They know Sanders is going to bring several positive strengths to the job.

"I think compassion will be a big one," said Wethington, who has known Sanders since they were students at University of Central Arkansas in Conway.

"He is very well spoken," she said. "He can stand up in front and teach ... He would be a very good homilist because of the background he's got."