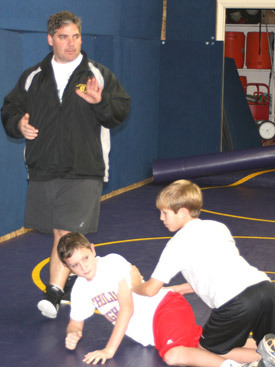 The nine seniors on the wrestling team at Little Rock Catholic High School in Little Rock all started with the program when wrestling was added to sporting competitions at the high school level, first as a club sport four years ago, then more recently, as an Arkansas Activities Association high school sports competition.

The program continues to grow. Currently, there are 28 wrestlers on the high school team, and Coach Paul Mammarelli has initiated a wrestling club for central Arkansas Catholic youth who are not old enough for the high school program.

"We had a short roster due to ACT, but wrestled well for those that went," Mammarelli said.

"We go out of state three times this year, twice to Tennessee and once to Texas," said Mammarelli, who volunteers his time to coach. "We battle in the state tournament the third week of February."

The high school team does more than just compete on the mat.

"Our guys have off-the-mat community services as well," the coach said. "(Our Lady of the) Holy Souls does Thanksgiving and a Christmas gift baskets for local families here in central Arkansas and for the last few years, my guys have signed up to deliver those baskets. And we also this year started our very first annual Turkey Shoot with the intention of collecting food."

The Turkey Shoot was a wrestling tournament. In wrestling, a take down is called a shot and in light of Thanksgiving, it was called a turkey shoot, he explained.

"All the participants from around the state came here to the gym," he said. "We had around 28 participants, and we took 180 cans of food and nonperishable items over to the Dorcas House (a shelter for battered women and children). It was a great success. We hope to keep it going every year."

What made Mammarelli even prouder was that the athletes came to him with the idea.

"To me that was a big accomplishment because they learned as a team to do something good, to be involved in the community," he said.

This fall, the Arkansas Catholic Youth Wrestling Club was formed for boys in fourth through eighth grades and is open to any boy attending a Catholic school or who participates in parish religious education. There are 14 clubs throughout the state.

The club, which has been practicing since Dec. 1, meets from 4-5 p.m. Tuesdays and Thursdays at the Catholic High field house. The season runs through March 31.

"What we wanted to do here in central Arkansas in the Catholic community, mainly with the parochial schools, we wanted to start these guys at a younger age, being exposed to wrestling, learning the rules of wrestling and giving them the opportunity to gain experience. So when they do get to the high school level, wherever they end up going to high school, they have a competitive advantage," Mammarelli said. "And we are seeing that in other parts of the state where that is occurring. We have had a great reception from all the parochial schools and from the administration here."

"Our intentions are to see how many guys we have, how many guys are prepared to compete in that as well," he said. "We hope they keep coming back and each year they keep getting better and better and if they continue to pursue wrestling as a sport, when they get to high school they will have a good foundation and a good start."

And if they happen to attend CHS, that is all the better for the team.

During a recent youth club practice, mats lined the floor of the field house, wrestlers crowded on the sides, next to the walls. The wrestlers got on the mat, started stretching exercises to loosen up. After a while, they returned to the sides and watched as the coach taught some initial moves to the five club members, Brandon Dobbins, Will Rankin, Michael Miller, Sam Piazza and Ryan Pohlkamp, who all attend local Catholic schools. The coach slowly went through the moves, explaining why he was making the move and showing the end results, as well as what might happen if they didn't perform it correctly.

After a while, the coach called out some of the high school wrestlers for practice matches. The grunting, moving, pushing, pulling started, interrupted by the sharp sound of a whistle as one or the other scored points, or the match ended.

"It is a lot of fun," Rankin, a seventh grader at Our Lady of the Holy Souls School in Little Rock, said as he took a break. "It is something that everybody can use their strength at and is really the only sport you can do that in America other than football, and the football season is over."