Refugee resettlement on the upswing, gets federal contract 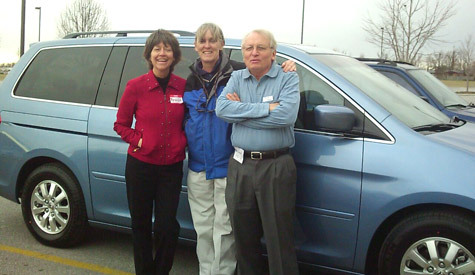 Catholic Charities of Arkansas is expanding its services to refugees in the state through a $75,000 annual federal contract.

The U.S. Department of Health and Human Services in Washington, D.C., has contracted with Catholic Charities Immigration Services in Springdale to offer services to refugees who are referred to them by the U.S. State Department or the State of Arkansas.

Refugees have fled their countries of origin and meet the United Nations' criteria of having a "well-founded fear of persecution for reasons of race, religion, nationality, membership in a particular social group, or political opinion." Once they meet the United Nations and State Department requirements and enter the United States, they are legally able to live and work in this country.

"Typically we would get one family every two months and now we get two or three families in a month," he said.

When the diocese started its Refugee Resettlement Program, it was mainly assisting refugees from Laos, Vietnam, Cambodia and Cuba as well as Europe.

"Right now most of them are coming from Iraq and then the biggest group is Iran and then Burma," Head said.

Since 2003 Head has helped resettle refugees who have family and friends in the state, but the services were limited to eight months. He would meet the family at the airport, unite them with their family or friend and assist them in getting the proper documents.

In 2009 a contract was given to Catholic Charities that will allow the staff to help refugees with employability referral services and network with other service providers to increase their chances of finding and keeping a job. The services could include providing them with English as a Second Language classes, signing them up on job banks and creating a resume for them.

Catholic Charities will provide services to the refugees up to five years after they arrive in the state.

Much of the work done by Head is now being handled by Rebecca Bryant, the new refugee resettlement specialist, who was hired in February.

Bryant, who has a bachelor's degree in business administration and a master's degree in community and regional planning, was a freelance contractor for 15 years where she worked with a wide variety of organizations, doing planning, communications, economic development, management and financial development.

Bryant said she is working for Catholic Charities because that she wants to spend the rest of her career in "direct services to the needy."

Bryant's position will require her to travel the entire state so most of her time will be spent in her mobile office. Through the contract, Catholic Charities bought a new Honda Odyssey van that can be used to transport the families to appointments. The car will be equipped with Internet access, a computer, printer and copier.

Sister Mary Lou Stubbs, DC, director of Catholic Charities of Arkansas, said she is hopeful the program will keep the contract long term.

"I anticipate it's going to be ongoing," she said. "It's much needed."