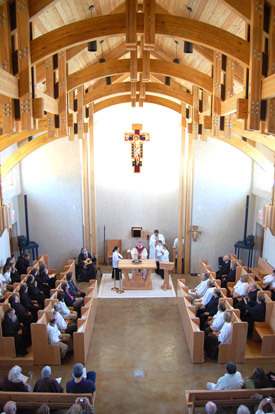 Bishop Anthony B. Taylor was joined by more than 140 monastic community members and guests at the dedication outside of Eureka Springs.

John Michael Talbot, founder and general minister of the Brothers and Sisters of Charity, said the celebration was "a lot of hard work and a glorious event."

"We have had two really rough years here in the monastery, really, really rough years since the fire," he said in an interview with Arkansas Catholic. "This year Holy Week and Easter week (the weather) couldn't have cooperated better. It was almost like it was orchestrated from heaven. It was wonderful."

The Brothers and Sisters of Charity is a public association of the faithful where Catholic families and celibate men and women live together. It was founded by Talbot, an internationally known musician, in 1982.

On April 28, 2008, a fire destroyed two buildings -- the 250-seat Charity Chapel and the common center. The center housed the library, kitchen, archives, offices and Talbot's lighting and sound equipment. Talbot has spent the past two years giving extra music concerts to raise money to construct the new building.

Other guests at the Mass included architects Albert and Lisa Skiles and contractor Dan Minkel and their families, Dan O'Neill, founder of Mercy Corps, a humanitarian agency, and Phil Perkins, Talbot's producer and co-worker in their collaboration of sacred music.

Talbot performed music at the dedication that included traditional monastic chant and contemporary praise and worship songs. Talbot described the preparations for the liturgy as somewhat stressful for the community.

"Everybody was a little nervous about the liturgy coming up just right," he said. "But Bishop Taylor said, 'Don't worry; it will all happen. What is important is that God is worshiped and the church is dedicated.' What a great bishop he is."

For Talbot, a dramatic part of the liturgy was the consecration of the altar.

"Others commented that (the bishop) did it with such love," he said. "There were two images present in my mind: the bishop constructing the altar like a great carpenter and the other was like the anointing of the body of Jesus for burial. I was sitting close to the altar where I was leading the music so I could see that he did it with such care."

At the beginning of the service, Talbot addressed the congregation.

"We are going to move forward," he told them. "We are not going to look back."

However, the night before, Talbot said he spent time remembering "the original monastery, the original chapel and all of the wonderful, miraculous things that happened to the people there ... the old church and how it had burned and how it was so terrible. But I woke up in the morning and said, 'OK, I have done that. I have grieved. Now it is time to go forward.'"

But going forward after the devastating fire was not easy. Al Skiles, a Fayetteville architect, saw the pictures of Talbot walking through the ashes on the local news.

"I e-mailed him to tell him that I was raised Catholic in a Catholic military school and that I had some empathy for their lifestyle. I offered my services to help them build their place," Skiles said.

He did the schematic design -- the first stage of the work -- for free.

Skiles described working with the Brothers and Sisters of Charity as an once-in-a-lifetime opportunity.

"It was very enriching and rewarding to participate and to get to know these folks," he said.

Skiles' firm spent a year preparing the drawings based on the needs of the community and the rough terrain of the building site. Construction began in the spring 2009.

Built in the style of a Franciscan mission, the monastery uses "green" technology that incorporates environmentally friendly building techniques in its design. The use of insulated concrete form, a popular construction technology to build exterior walls, minimizes energy requirements for a building.

The large dining hall is located on the south side of the building with an upper row of windows facing out. The design allows for temperatures to be regulated by accumulating more solar heat in winter and the building's window overhangs that protect against the summer sunlight.

A majority of building materials came from Arkansas, according to Skiles.

"All the beams, all the pine wood is from Arkansas. They are cut out on a computer-driven machine and assembled with bolts," he said.

Skiles said the building's interior resembles the traditional medieval monastery, including a chapter room where the members of the community gather to work out policies and talk about daily routines.

The large dining hall can be used as an assembly space and has a commercial kitchen. The monastery is equipped with two different infirmaries to accommodate both men and women.

The cloister is an area that serves as a transition space for the offices, library, conference room and classrooms that are to be used for the private functions of the monastery.

The public spaces, including the assembly hall and chapel, also include a porter room. Based on the design of the traditional monastery, the porter room was for the gatekeeper to welcome and receive guests. In the case of the new monastery, there is a gift shop that acts as a receiving area for people visiting the monastery.