Noah Findlay's track career off to a fast start 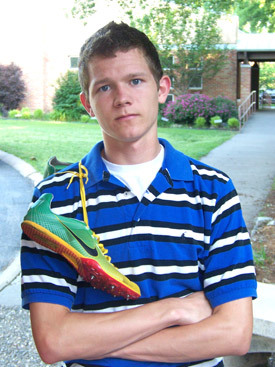 Dwain Hebda
Noah Findlay, a Catholic High freshman, has become known as one of the best distance runners in the state.

Dwain Hebda
Noah Findlay, a Catholic High freshman, has become known as one of the best distance runners in the state.

"I believe God made me for a purpose, but he also made me fast. And when I run, I feel his pleasure."
--Eric Liddell, "Chariots of Fire"

You don't have to know much about running to appreciate Noah Findlay's gift, just watching him do track work is enough.

His long stride and smooth, easy gait glides over the track, accelerating as powerfully and decelerating as easily on the last interval as the first. Above the waist, no energy is wasted on unnecessary movement. Even in cool-down every step is so graceful and measured one is hard pressed to observe a single idle step, much less a wasted lap. It's easy to forget Findlay is just in the starting gate of his potential.

His athletic ability isn't the most striking thing about him even though it distinguishes him at the age of 14 as one of the most talented distance runners in the state. Nor is it the impressive 3.77 grade point average he carries at Catholic High School, though he earned it while devoting five and six days to cross country and track practice. It's not even the fact that in addition to distance running, he also plays club soccer and was on Catholic's freshman basketball squad this year, much to his track coaches' chagrin.

The thing one notices most about the young man, a member of Our Lady of the Holy Souls Parish in Little Rock and former participant in the Parochial League, is the easy manner in which he takes in life both in and out of his track spikes. Whether discussing his proudest accomplishment, describing his most disappointing loss or revealing his wildest aspirations, Findlay takes it all in stride (no pun intended).

"My mom used to run 5Ks and the first race I ever ran was the Mud Run," he said. "By junior high I was kind of interested in track, but I really surprised myself by how much I liked it and it just sort of stuck."

Findlay's low-key approach is genuine, but coaches and opponents alike know underneath is a determination few can match. Even after miles of training, Findlay is still obsessed enough to download track times on the Internet and watch endless running and race videos to measure himself against the sport's elite. Steve Lienhart, Catholic High's head track coach, describes it as being "locked in."

"When he's looking at a goal he wants to accomplish, it's almost like a horse with blinders on," Lienhart said. "He's incredibly focused and he has a desire to succeed that you don't find in everyone. No one wants to fail in sports, but where some guys are satisfied with a fourth or fifth place or a personal best, Noah isn't satisfied unless he's first. He has a belief that he can and should win every time out."

Findlay's results over the past school year have done nothing to dampen that confidence. His best time in cross country was at the conference championship in October where he posted a 16:57 at 5K. At the state indoor meet in February, he took third at 800 meters in a time of 2:01 and was also third at the state outdoor meet last month, running the 1,600-meter final in 4:32 in brutal weather conditions. The finish earned him an invitation to run in the Meet of Champions at Lake Hamilton May 8, where he placed fourth.

Asked for a particular highlight to his first year at the high school level Findlay said, "In April at the Lake Hamilton meet, I ran against the top two guys in the state at 1600m. It came down to just us three and I took off with about a lap to go. Somehow I managed to hold them off and win."

While the win gave Findlay his best time in the 1600-meter at 4:23, he doesn't let himself rest for long on that accomplishment, adding, "Breaking 4:20 at that distance is in the back of my mind."

If piling up wins and lowering personal bests are tantalizing mental carrots, then losses, even occasional ones, are the sticks stoking his competitive furnace. The memory of one such setback, his third-place finish at state outdoors, momentarily cools his amiability.

"I enjoyed everything about this year except the state meet," he said, eyes narrowing. "I got caught up in the moment and didn't run my race."

Mark Andersen, Catholic High's cross country coach, worked all season with Findlay and his fellow distance runners. He said the sting of a loss at such a cumulative point in the year, disappointing though it may be, is all part of a runner's development.

"I've always believed that 90 percent of success in running is between your ears. You have to stay relaxed, stay alert and not get distracted," Anderson said. "We had a good strategy for the state meet, but Noah fell asleep a little bit and that happens. ... Every race you learn something. You learn when you win, but you learn a lot more from your losses."

Trying to sell such an athlete on the benefits of a loss might seem like a tall order, but the Catholic High coaching staff's credentials make their philosophy hard to argue. Both Lienhart and Andersen are former collegiate runners at the University of Arkansas, and they are joined by former Razorback and three-time Olympian Frank O'Mara in coaching the distance runners. Their stamp on the success of the still-burgeoning Rocket track program is indelible.

"We train really smart," Findlay said. "We probably do half the mileage of other teams, but we get more out of what we are doing. We've learned how important it is to get enough rest, too."

Findlay's rest will come in a short break this summer, which might include some prestigious meets before it's back to work for the Rockets' cross country season. Findlay is customarily nonchalant about the possibility of adding additional races to his repertoire next year or the very real possibility that his chance to develop into a college-caliber and ultimately Olympic-level runner will require weeding out other athletics.

"Running is painful, I mean, this is as hard as it gets," he said. "In other sports, I could always rely on my teammates to pick me up, but out here, it is all on you. ... I stay motivated in running because I love to do it. I'm competitive and I'm lucky to have guys on my team who really push me as well."

See more news about sports in Catholic schools on the monthly "Good Sports" page, only in