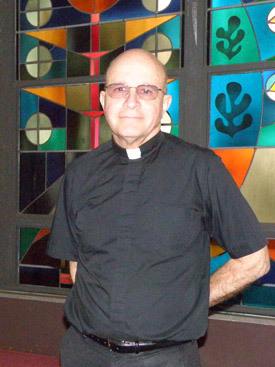 During Msgr. Lawrence A. Frederick's 44 years of priesthood, he has celebrated many Masses and served as a chaplain, campus minister and associate pastor. But to many alumni of Catholic High School for Boys in Little Rock, he will always be their teacher, "Father Fred."

Years ago, some seniors at the school decided "Father Frederick" was too long and shortened it to "Father Fred." The name stuck, and he has been "Father Fred" to Catholic High students ever since.

Born in North Little Rock, Msgr. Frederick was the oldest of three boys. He attended St. Patrick School and then "the old Catholic High School" on State Street, where he graduated in 1955.

After graduation, he enrolled in St. Louis University, where he received a bachelor's degree in aeronautical engineering. At this time he also worked for McDonnell Aircraft, which built the first human-controlled spacecraft for NASA's Project Mercury.

This work experience is a popular topic of discussion among his students, who sometimes think he worked for NASA.

"That idea came from the fact I worked for McDonnell Douglas (then McDonnell Aircraft) in St. Louis. I spent a lot of time on Mercury (the first craft in space)," he said.

At this time, in late 1959, he began thinking "maybe there was something else God wanted me to do," he said.

He decided to enter the seminary, and he returned to Little Rock to do it.

"This was my home. If I was being called to serve, I wanted to serve in my home diocese," he said.

Msgr. Frederick, 73, said his students often ask what led him to make this decision and can be disappointed when he tells them there was no one thing.

Msgr. Frederick was one of five priests ordained for the Diocese of Little Rock in May 1966.

Msgr. James E. Mancini, pastor of St. Bernard of Clairvaux Church in Bella Vista and another member of this group, remembers his classmate "Larry" as hard-working and very devout.

"He was a good example for us," Msgr. Mancini said. "He was a bit more mature since he had already been through college."

While Msgr. Frederick was in the seminary, he earned a master's degree in mathematics from the University of Arkansas at Fayetteville. His math and science background was unusual for a priest, and the bishop wanted him to put it to use immediately.

"Usually the seminaries prefer you to have a liberal arts degree," Msgr. Frederick said. "Bishop Fletcher said, 'You are going to teach.' They needed math teachers at that time."

"Several priests have done both (schools), but never before have any taught at both schools at the same time," Msgr. Frederick said. "My life is not a typical parish priest life at all."

During his teaching career, he has taught "the whole realm" of math (algebra, trigonometry, precalculus), science (physical science, earth science, physics) and religion. But his favorite course to teach is physics "since I was an engineer," he said.

For some the relationship between science and religion is troubling, but not for Msgr. Frederick.

Although he said his teaching is basically the same at the two schools, he does tailor his approach -- a little more analytical with the boys, and more intuitive with the girls.

He also serves as the chaplain for the Carmel of St. Teresa of Jesus in Little Rock, where he celebrates Mass every day.

"Some days I say three Masses -- one there, one at Catholic High, and one at the Mount," he said.

His weekends are busy too, as he is often asked to celebrate weddings for former students. "And after the weddings come the baptisms," he said.

"Administering the sacraments is the greatest joy of the priesthood," Msgr. Frederick said. The hardest part is time -- "trying to keep up with everything."

When asked about his plans for the future, he said, "Only God and the bishop know that. As long as I'm able, I'd like to teach. But when I can't, I'll retire. I don't plan to make any changes unless the bishop tells me."