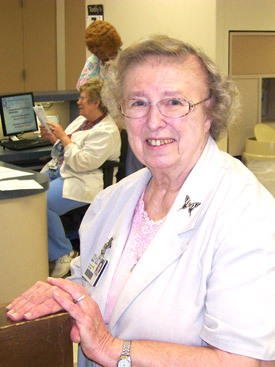 Not long ago, a re-shuffling of offices at St. Vincent Infirmary Medical Center in Little Rock relocated Sister Margaret Meisner, SCN, to a new space down a quiet, sparsely-populated hallway. While the solitude suited her contemplative side, her social nature demanded one slight modification -- she keeps the door open at all times so anyone who passes may enter.

"We are blessed by those we meet," she said.

Sister Margaret's vocational life can be described similarly -- a door left perpetually open for the call of Christ in whatever form it may take. Over the past 55 years, hers has been a life expectant not of something, but anything.

"The Spirit leads me where I am needed," she said. "Sometimes I don't plan to be there, but I am led there."

Sister Margaret doesn't seem overly concerned about being the last of her order, the Sisters of Charity of Nazareth, at the hospital. Walking the halls with her, it's easy to see the impact even one devoted person can have on an institution. Every person she encounters she greets by name. As director of guest relations and patient representative, her day is spent managing volunteers, gathering feedback from patients as to the level of care they receive and, of course, handling everything God puts in her path.

"God calls each one of us to do his will and gives us everything we need to do it," she said. "God watches out for us. I know he has given me everything, to the point that I don't even have to think about it."

Such clarity does not come without effort, however. Sister Margaret said the key to everyone realizing their individual vocation -- religious or otherwise -- is through reflection and prayer.

"Prayer is so important," she said. "If we sisters aren't grounded in prayer, our lives are down the tubes. We can't live the life we live without prayer. There are so many things to keep a young person's mind off of God today to the point that they doneven ask the question 'Where does God want me?'"

Growing up in Louisville, Ky., Sister Margaret didn't really ponder the question herself until middle school, when she was impressed by Sister Mary Madeleine.

"She was so Christ-like to me," Sister Margaret said. "She was someone very special who always had time for me and made the effort to show what religious life was like."

Sister Margaret entered the Sisters of Charity of Nazareth in 1953. Her enthusiasm for her new vocation was so profound, that even as the realities of her day-to-day life began to unfold, she said she never once doubted her decision.

"I don't think any of us thought we'd start so early in the morning," she said with a laugh. "We always envision new things as a bed of roses, but when you get into it you find out you are up against human nature. You get your ups and your downs and you trust the Lord to get you through it."

Based in Nazareth, Ky., the Sisters of Charity are an international order founded in Bardstown, Ky., in 1812. At the time, it was one of the few American-founded orders and as the history of the nation unfolded, the order's work was inextricably linked to those events and resulting issues.

Sister Margaret's contribution began at age 19 with her first assignment as a teacher in Columbus, Ohio. Despite having never traveled outside of her home state she said homesickness was never a concern.

"I was too caught up in what was going on," she said of the assignment, which short-circuited her original path in the order's nursing program and eventually included elementary teaching assignments in four states spanning 20 years. In that time, she also earned a bachelor's degree in education from Spalding University in Louisville and a master's degree in religious education from Loyola University in Chicago.

Two assignments during her religious education days represented turning points in her vocation, beginning with her assignment to a parish in Greenwood, Miss.

"There was a Franciscan there who lived as a hermit in the woods," she said. "Learning about him and how he lived, I became interested in the contemplative side of prayer."

That interest led Sister Margaret to request several months to live in solitude in a hermitage. The request though unprecedented, was granted for a full year. Sister Margaret spent the months, spanning 1979 and 1980, in a shelter she built herself at the Transfiguration House of Prayer facility in Butler, Penn.

"I found my way of prayer," she said of the experience. "We pray out of who we are. The contemplative spirit isn't satisfied just with community prayer. It was something that helped me get into the meaning of prayer in a deeper way."

Shortly after the experience, Sister Margaret was assigned to Arkansas for the first time, serving as religious education director at St. Theresa Church in Little Rock. In 1990 she returned to the state for short-lived posts serving Batesville, Mountain View and Newport. She then accepted a part-time role counseling and consoling in the emergency and surgical waiting rooms of St. Vincent.

"When I got here, I thought I would do this while I continued to look around for my next assignment and generally just see what the Lord brings me," she said. "After 18 years I'm still here."

At 74, Sister Margaret admits St. Vincent is probably her last assignment, but as usual the door on her future remains open.

"You never know when you are going to touch a life," she said. "I may never know who I've helped, but I don't need to know. God knows. There are some things he doesn't tell me, but he does say that I have right here, right now in this moment. That's all any of us have. It's all part of the journey."